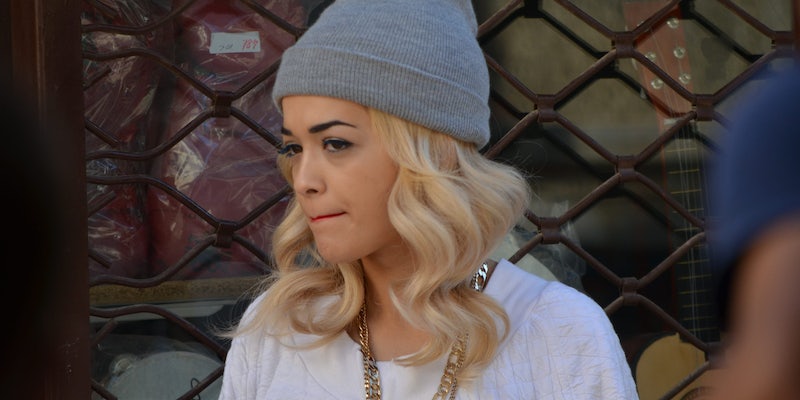 Experimentation is a part of queer life.

Rita Ora’s new single “Girls” dropped on Friday, and it’s set to be one of this summer’s most popular singles—and one of its most controversial. The song features Cardi B, Bebe Rexha, and Charli XCX singing about making out with other women while smoking weed and drinking red wine. Ora said the track was “inspired” by Katy Perry’s hit single “I Kissed a Girl,” and in an interview with People, she hinted the lyrics are partly about herself.

“I’m not hiding what I am, who I am, if I wanna do this, if I wanna do that,” Ora told People. And while she declined to outright call herself bisexual or gay, she said the song is “definitely the most open-book I’ve ever been.”

But just like Perry’s song from 2008, “Girls” has faced some pretty serious backlash of its own. Queer artist Kehlani called the song’s lyrics “harmful.” DJ KITTENS, who is openly gay, said the track is part of a larger pattern in music where queer women are “fetishized” and their relationships are not “ever taken seriously.” Most notably, lesbian singer Hayley Kiyoko condemned the song for being “downright tone-deaf” and fueling “the male gaze while marginalizing the idea of women loving women.”

“I don’t need to drink wine to kiss girls; I’ve loved women my entire life,” Kiyoko explained. “This type of message is dangerous because it completely belittles and invalidates the very pure feelings of an entire community.”

No one is invalidating their identities. Bisexuality is a valid identity. This song is literally about wanting to hehe kiss girls when you’re drinking and smoking weed. That’s all we got. It’s harmful when LGBT women are fetishized and no relationships are ever taken seriously

I’m gay as fuck and identify as a lesbian and have for almost 15 years…and I STILL get people thinking it’s some not serious just for fun/show thing. So it’s even worse for bisexual women. These types of messages and songs perpetuate that and it’s harmful and hurtful.

Most of the negative responses to “Girls” insist that women don’t love women the way that the song portrays. But that’s not exactly true. Sometimes queer relationships are murky, complicated, and entirely sexual. Bebe Rexha and Charli XCX’s verse starts with “You know I tamed it, and then I named it/I put the lion in the cage and then I laid with her,” and, as blatantly objectifying as that sounds, some queer sexual experiences are entirely consensual power fantasies rooted in objectification. Yes, plenty of queer women talk about their sex lives just like that.

Then there’s Cardi B’s verse, where she raps about how she “could be your lipstick for one night” and that her name “tastes good just rolling off your tongue.” Cardi isn’t exactly the straightest girl in the world—she once told The Breakfast Club that she’s flirted with girls, that she likes girls’ faces, and that she used to “date dykes.” Granted, she doesn’t have the best track record with the LGBTQ community, but even if she has a lot to learn, she’s pretty openly affirming about how great it is for women to love other women.

The most cliched lesbian and bisexual coming out stories tend to take place in childhood or high school, where a young queer woman comes into her sexuality by sheer accident or “mistake.” That coming out story may be true for some queer women, maybe. Others may have had a strong, assured sense of their sexuality ever since they were very little. But for some, their coming out sounds a lot more like “Girls”—a truth-or-dare kiss after smoking weed with friends, a stray kiss at a late-night party, or an unexpected hook-up after one drink too many.

“Bisexuality isn’t selective. It doesn’t attach itself only to ‘cool’ girls with a perfect understanding of the intricacies of sexual politics,” podcast host Anna Turner, who is bisexual, wrote on Twitter. “You can wear Missguided & drink at All Bar One & still be bisexual. Some of those women will explore their sexuality beyond the threshold of Vodka Revs. Some won’t. That’s fine.”

Bisexuality isn't selective. It doesn't attach itself only to "cool" girls with a perfect understanding of the intricacies of sexual politics.

I'm talking about bisexual women here, not to erase the experience of bisexual men, but because it's a certain female segment of the bisexual community who are getting the brunt of the biphobic backlash against this song.

Thank you!!! Anyones bisexuality shouldn’t be invalidated by the fact you need a drink to kiss a girl… for some girls it’s the safest way to fully realise the fact you can be attracted to people of the same gender?

Regardless, “Girls” isn’t a perfect song. The single definitely has its problems, most notably Cardi’s “have her down with the scissor” line that’s so stereotypical it could cause any queer woman to gag. And it isn’t as explicitly queer as, say, St. Vincent’s Masseduction, which openly talks about kink and sexuality in a way that’s so blatant, it’s sure to turn a few heads.

But not every queer experience is identical, and for some queer women, “Girls” may represent their stories a bit more realistically than other snippets of pop culture. That doesn’t invalidate other queer women’s more nuanced experiences or artwork. It just means that Ora wrote a song about women experimenting and figuring out who they are in a 2018 that’s a lot less woke than we give it credit for.