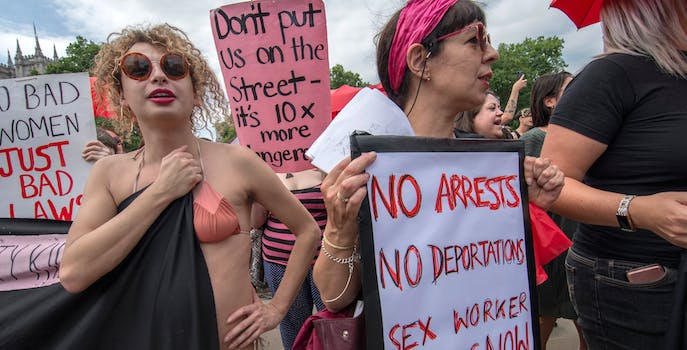 Do not confuse it with 'sex trafficking.'

This spring, a smattering of well-meaning but woefully misinformed celebrities took a stand for an issue they seem not to understand: sex trafficking.

The star-studded PSA came as part of a promotional package for two bills. The first was the Fight Online Sex Trafficking Act (FOSTA), from the U.S. House, and the second was the Stop Enabling Sex Trafficking Act (SESTA), from the U.S. Senate. President Donald Trump signed the latter into law in April. The legislation kicked up quite a bit of controversy, chiefly because no sex workers seem to have been consulted in its crafting. Critics warned that it threatened the well-being of the very groups it was supposed to protect. It also conflated the concept of sex work and sex trafficking. But maybe you’ve long been scratching your head on the subject. So what is a sex worker, exactly?

With an eye to clarifying common misconceptions that allows dangerous measures like SESTA/FOSTA to become part of U.S. law, we’ve put together an explainer on what sex work actually means.

What is a sex worker?

What does SESTA/FOSTA have to do with how we understand sex work?

FOSTA and SESTA intended to curb human trafficking—a lot of which happens on internet platforms that many sex workers use to engage clients. Both these legislations amended the Communications Decency Act to hold those websites legally responsible for any talk about sexual exchange that happens on their platforms. As a result, Backpage.com—the primary target—shut down in April. This left sex workers, not just “sex traffickers,” without a space to post ads and vet new business.

As FOSTA made its way through the House, the Daily Dot spoke with sex workers to gauge the real-life implications of an internet without Backpage and similar online forums. The consensus? Taking sex work offline means moving it onto the streets. It means blocking avenues for sex trafficking victims to seek help. Ultimately, it’s a substantial blow to sex workers’ personal safety.

“SESTA/FOSTA is not only a chilling free speech issue,” Christa Daring, executive director of the Sex Workers Outreach Project-USA (SWOP-USA), told the Daily Dot. “It tangibly makes the lives of sex workers more dangerous. Backpage was a stalwart platform for sex workers to advertise on and also to screen their clients. Screening is not something that all sex workers have access to, but it is a vital tool that should be more available, rather than less.”

But because sex work remains stigmatized, many people fail to really understand what it is. If SESTA/FOSTA are anything to go on, many people assume that no one would choose the world’s oldest profession willingly. Those who support the legislation assume that some degree of coercion must be inherent in the job.

But that is generally not true.

What does it mean to be a sex worker?

“Sex workers experience a spectrum of choice, from those just surviving day-to-day to those making middle-class incomes,” they add. The former often means subsistence sex work—swapping sex for food, housing, clothes, and other basic necessities—while the latter camp may include escorts, exotic dancers, cam models, people who engage in domination and/or humiliation, people who work in brothels, people who work on the street, and so forth.

When sex workers meet clients on the street, however, research suggests that conditions become far riskier. To avoid law enforcement, street-based sex workers may seek out less visible areas. Operating on a street corner, a sex worker has mere moments to decide whether or not they’ll get into a car or trust a client. Online platforms not only offer sex workers physical separation from prospective clients, but also the ability to do their homework and connect with other sex workers. You could run an informal background check on a person you met on Backpage.com, for example, by checking in with the community. When you have to make those snap judgments on the fly, you take on risk.

Many people take up sex work voluntarily—but others don’t. When a person enters the trade without their consent, that typically means they’ve been trafficked. “Sex trafficking is when an individual is forced to perform sexual labor through force, fraud, or coercion,” Daring explains. “While capitalism coerces everyone—very few people can choose whether or not they work or don’t—we specifically mean coercion through direct threats or removal of all other options.”

This could mean anything from confiscating a person’s passport or holding their child hostage, Daring says. Minors engaged in commercial sex automatically fall into the trafficking camp under U.S. law. Still, like all trafficking victims, they may be more likely to be treated as criminals by the legal system.

When we’re talking about sex trafficking, we’re talking about people classically called “pimps” trapping others into forced sexual labor. Traffickers did use Backpage.com—as did independent sex workers by their own will—but without the internet as a means of finding new clients, it’s not like those traffickers simply abandoned their agendas.

When the government shuts down one platform for sex work, as SWOP Sacramento executive director and former sex worker Kristen DiAngelo previously told the Daily Dot, traffickers will send people out onto the streets. “When you take away a worker’s available options, they have to drop down to the next-best available option,” DiAngelo says. “We don’t disappear because they get rid of our work.”

Daring echoes this sentiment. “We have heard increased reports from sex workers being approached by potential pimps since the passing of SESTA/FOSTA. It makes us more vulnerable.”

Sex workers (whether they are trafficking victims or not, but especially when they are) have fewer means of ensuring their own safety without the internet.

What is the difference between a sex worker and a prostitute?

U.S. law still refers to sex work as prostitution, terminology that sex workers and advocates avoid. In addition to piling shame on sex workers, Daring explains, the word prostitute “individualizes a form [of] work and makes it into the name or type of person.”

“Sex worker clearly defines [the job] as work, which is essential to fighting the stigma surrounding commercial sex,” Daring says. “Some sex workers may identify as prostitutes and we certainly do not contest their right to do so, but sex worker is a much more encompassing term that builds community and signifies autonomy and self-determination.”

“Sex trafficking is a symptom of the criminalization and the stigma that keeps people in the sex industry vulnerable, regardless of how they got there,” Siouxsie Q, an author, politician, and sex worker, previously told the Daily Dot. “Once you decriminalize the workers, you decriminalize the victims, and you disable the power of the abuser.”