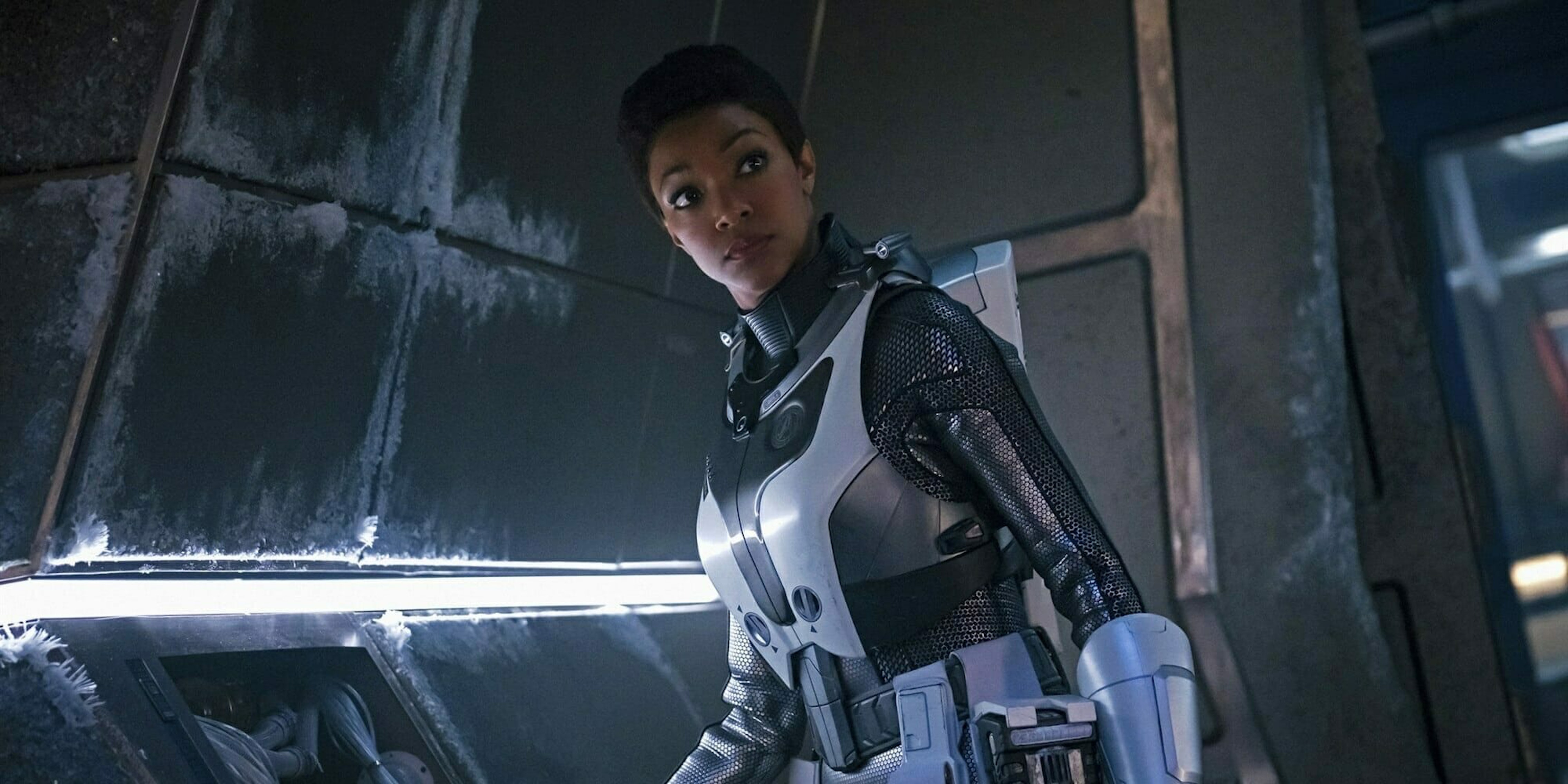 “Wherever our mission takes us,” says Captain Pike, during Discovery’s second season premiere. “We’ll try to have a little fun along the way.” He might as well have looked straight into the camera and told us that things won’t get so dark this time around. Season 2 begins with a much more upbeat tone, emphasizing the teamwork and optimism that defined classic Star Trek.

With a title referring to Spock’s relationship with Michael Burnham (Sonequa Martin-Green), “Brother” mirrors the original Discovery premiere. Like “The Vulcan Hello,” it involves Michael donning a spacesuit to explore a mysterious phenomenon. But while season 1 introduced Burnham as a cocky loner who becomes the scapegoat for an interplanetary war, “Brother” highlights how far she’s come. She’s formed close bonds with her crewmates, illustrated with cute little scenes like Burnham checking in with a sick alien coworker or geeking out with Ensign Tilly about space rocks. Discovery has finally cemented a sense of camaraderie among the main cast, going hand-in-hand with the arrival of their new captain, Christopher Pike.

Pike was captain in the original 1965 Star Trek pilot, replaced by William Shatner‘s Kirk for the main series. In the official Star Trek timeline, he’s Kirk’s predecessor on the Enterprise, and Spock’s first commanding officer. If you’ve seen the reboot movies, you may remember him as Kirk’s mentor at Starfleet Academy.

The original Pike was stern, burned out, and kind of a stuffed shirt. Discovery’s version is so different that he’s practically a new character, the main similarity being Anson Mount’s clean-cut 1960s handsomeness. He looks like a Brylcreem ad, and as for the stuffed shirt issue, well—stuffed with charm and wholesome Starfleet ideals, maybe!! Gosh, I love him. He’s the polar opposite of the manipulative Captain Lorca: an approachable leader who wants a fulfilling relationship with his crew.

Replacing Saru as captain, Pike transfers from the Enterprise to investigate some weird energy signals. Instead of bringing Spock (who is mysteriously absent), Pike arrives with two other Enterprise officers, one of whom is, by the laws of Star Trek, doomed to die during the mission. This time, it’s a dude who gets terminally punished for mansplaining how to dodge an asteroid.

The mission takes Pike, Burnham, and the two Enterprise officers on a perilous flight to a fast-moving asteroid, hoping to rescue survivors from a crashed Starfleet vessel. It’s the kind of high-octane action sequence you expect from director/showrunner Alex Kurtzman, but it’s not just flashy special effects. This story shows the crew working as a cohesive unit to do a job they actually want to do, something that rarely happened last season. Not only were they at war (something that most Starfleet officers never signed up for) but their captain was an asshole who gave unethical orders and encouraged a chilly, paranoid atmosphere. These days the bridge crew feel like an actual community, and this mission lets them show off their expertise as a team.

After getting pummelled by asteroids, Pike and Burnham find the wrecked ship and encounter one of the season’s most exciting guest stars: comedian Tig Notaro. She’s playing a suitably Tig Notaro-esque character, a deadpan engineer who kept her injured crewmates alive with DIY medical instruments. (“The body’s just a machine,” she says, adding drily: “And I read.”) Trapped for almost a year, she has no idea that the Klingon war is over, and is understandably shocked when Burnham tells her there’s an armistice. Incidentally, everyone in this very serious scene is wearing a spangly metallic catsuit that makes them look like disco Power Rangers. Star Trek!

I look forward to seeing more of Notaro’s character. However, the pivotal moment on that asteroid may have nothing to do with her. Injured by falling debris while trying to beam home, Burnham witnesses our first hint at the season-wide arc: a red, winged figure. We don’t know if it’s a malevolent alien or a psychic phenomenon or what, but we know these “Red Angels” are significant—and Spock seems to be investigating them. Wherever he is.

Do we actually need more Spock?

Spock looms large this season, and I admit I have some reservations about his role. Not because he’s a sacred figure who shouldn’t be sullied by new material, but because his arc is already complete. As I pointed out in my spoiler-free review, Leonard Nimoy spent decades developing this character to a satisfying conclusion, and Discovery takes place before Spock formed all his important relationships in the Original Series. Young Spock may be different (perhaps more volatile) than we remember, but ultimately I’d prefer the show to focus on new characters. Maybe that’s why Burnham’s childhood flashbacks were my least favorite element of the premiere.

We see Burnham’s arrival on Vulcan; a human orphan adopted by Spock’s parents Amanda Grayson (a human) and Sarek (a Vulcan ambassador) . Spock doesn’t like his new big sister, and we learn that in the present day, they’re estranged. The problem is, this all feels like old news. James Frain is wonderfully bitchy as Sarek, but we already knew that Sarek was a flawed father who made high-handed decisions about his children’s lives. Meanwhile, we still know virtually nothing about Amanda. While the Original Series introduced her as a witty and energetic society matron, Discovery’s version is just, well… a generic mom.

At one point Sarek says he adopted Michael so Spock could learn empathy from a human peer. When Michael points out that Spock already had a human mother, Sarek handwaves Amanda’s influence by saying that Spock “reveres” his mother too much to learn from her. This may not be true because Sarek isn’t exactly a reliable source, but the end result still sidelines Amanda. It’s a common problem for moms in sci-fi/fantasy media, where daddy issues reign supreme. In this case, it feels especially lazy to focus on Sarek once again, when we know so little about the woman who raised both Spock and Michael Burnham.

Played by Ethan Peck in later episodes, adult Spock doesn’t actually appear this week. Instead, we see Michael visit his quarters on the Enterprise, learning from his personal log that he’s embarked on a dangerous quest. This sets the scene for a new multi-episode arc, while introducing a (possibly unintentional) question about their relationship. Did Spock leave permission for Michael to enter his quarters and read his diary, or did Pike just let Spock’s estranged sister mess around with his private possessions? One hopes it’s the former, not the latter.

A new captain for the new year

With seven long days to wait for more Star Trek, let’s pause for a moment to talk about captaincy.

I’ve said before that Star Trek is basically a workplace drama, and the best-known captains are all excellent managers. Each of them embodies some element of Starfleet’s ideals, showing how they earned their promotions. Kirk is an open-minded tactician/explorer with great social skills. Picard is an accomplished diplomat and moral philosopher. Georgiou (Michelle Yeoh) was an optimistic adventurer who nurtured protégés from unusual backgrounds. They’re all inspirational leaders with minimal angst, differing from the current vogue for conflicted heroes. They’re wholesome, old-fashioned role models, a descriptor that fits Anson Mount’s Captain Pike to a tee.

With a slightly goofy persona but a strong ethical backbone, Pike displays textbook Starfleet Leadership Skills. He instantly puts his new crew at ease, respecting their input and cracking jokes, but laying down the law when he thinks they’re being too pessimistic. At the start of their rescue mission, he sternly explains that the crew needs to provide solutions instead of just highlighting problems because he refuses to give up and abandon any survivors. When Burnham points out that he actually interrupted her trying to give a solution, he immediately backs down. He visibly tries to make a good impression while maintaining his position of authority, and it’s much more effective than Lorca’s divide-and-conquer approach. Plus, he’s very charming. That certainly doesn’t hurt.

What comes next in season 2?

Aside from the whole Red Angel thing, we have two big questions leading into season 2: What’s up with the Klingons, and will Lt. Stamets’ husband Hugh Culber come back from the dead?

A throwaway line confirmed that L’Rell is the new Klingon Chancellor, and we know that Voq/Ash Tyler will return. That other question is more enigmatic, though. So far, Discovery has portrayed Culber as straightforwardly dead, with Stamets allegedly quitting Starfleet for an academic posting. However, the cast and showrunners have been yelling from the rooftops that Stamets and Culber’s relationship “isn’t over,” a twist they’re eager to reveal because fans were pissed about Discovery killing off one of its first LGBTQ characters. So how, exactly, is Culber going to return?