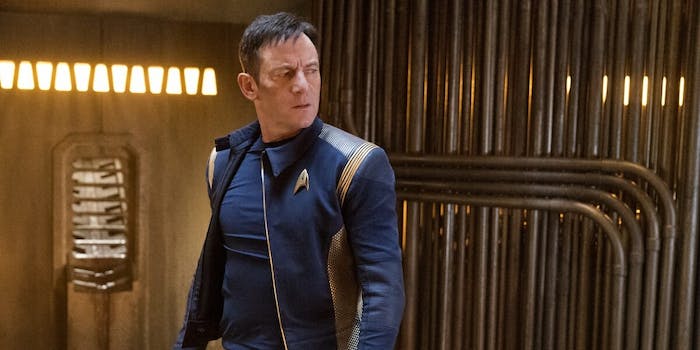 Did ‘Star Trek: Discovery’ go too far with the animal cruelty in episode 5?

This episode dropped Star Trek's first F-bomb, and hinted at the return of the fan-favorite Mirror Universe.

It’s hard to love a character who harms animals, which is part of why last week’s episode felt so dispiriting. Captain Lorca is ruthless enough use a living creature as spaceship fuel, but it’s sad to see Burnham and Saru follow his lead. By using the captured tardigrade to pilot Discovery’s spore drive, they ignore their own moral instincts and the ideals of Starfleet.

Of course, the dilemma is more complex than a simple question of animal cruelty. Burnham hates to see the tardigrade suffer, but its abilities helped to save hundreds of lives. You can see why Starfleet is reluctant to set it free. The problem is, this is a classic Star Trek moral conundrum—and Discovery’s main characters had to be forced into making the right decision. They come close to betraying Star Trek’s core theme of hope and ingenuity in the face of impossible odds.

Take, for example, the Original Series episode “The Devil in the Dark.” It introduces a monster who lurks in the tunnels of a mining colony, killing dozens of miners. When Kirk and Spock investigate, they realize the creature is just protecting its children, and is intelligent enough to communicate. They’re able to broker an agreement between the alien and the miners, allowing them to live in harmony. It starts off as a pretty grim scenario, but through investigation and communication, the heroes avoid doing further harm to an alien species.

Star Trek‘s history is littered with similar stories, celebrating the power of compassion and curiosity. So far, Discovery differs in a couple of ways. First of all, its characters display less moral certainty. While Burnham disagrees with the tardigrade’s treatment, she’s a lone voice of dissent opposite Tilly, Stamets, and even Saru. She only shares her doubts after several weeks, when the tardigrade is seriously ill. That brings me to the second issue: longform storytelling.

Discovery is more serialized than previous Star Treks, and while that isn’t a bad thing, the tardigrade storyline illustrates one of the downsides. Instead of concluding a rather grim subplot in one episode, we had a week of suspense—and more animal cruelty—before Burnham eventually freed Ripper. That’s too long. If the show wants to set up a contrast between Burnham’s compassion and Lorca’s warlike nature, we need to see that contrast in action.

The tardigrade situation becomes more urgent when Lorca gets kidnapped by Klingons, giving us our first look at Saru as a commander. He obviously loved Georgiou (and envied Burnham’s position as her protege), but he doesn’t have Georgiou’s social finesse. Unfortunately, he also lacks Lorca’s independent self-confidence. Too insecure to consult his subordinates, he asks the computer to grade his progress while organizing the rescue effort.

Lorca’s storyline is equally well-suited to his personality. While Saru struggles with leadership, Lorca is trapped in a Klingon cell with Starfleet POW Ash Tyler (Shazad Latif) and professional sleazebag Harry Mudd. Introduced as a comical antagonist in the Original Series, Mudd is a rather divisive figure. TOS framed him as a lovable rogue, but his actual job was human trafficking. Oddly enough, that makes him a good fit for Discovery‘s darker tone. Rainn Wilson plays him as a slimeball with a big personality, acting as a foil for Lorca’s strategic mind.

The Klingons allow their prisoners to “choose their pain,” selecting a cellmate to be tortured in their place. Mudd spent months throwing Tyler to the wolves, with an implication that Tyler was raped by the Klingon captain. But with three people in the cell, the balance of power has shifted. Faced with mortal peril and an untrustworthy cellmate, Lorca is in his element. He orchestrates an escape with Tyler, using methods that I can only describe as “classic Lorca.” That means leaving Mudd to die, flagrantly ignoring Starfleet’s code of ethics and basic human decency. But then Lorca saves Tyler, even though Tyler is slowing him down. What should we believe, here? Does he save Tyler as a fellow Starfleet officer, or as an intelligence asset? After all, Tyler spent months in that Klingon prison. And to be honest, he is obviously a Klingon spy. Come on, now.

Back on Discovery, Lorca’s rescue comes at a price. The tardigrade goes into “hibernation” with a disturbing spasm that resembles rigor mortis, and Saru orders Stamets to revive it by any means necessary. This raises a question about Saru’s attitude to the tardigrade. Is it out of character for him to be so cruel, or is he intentionally dampening his sympathy? He also ignores his instincts as a scientist, unwisely copying Lorca’s habit of giving overly ambitious orders. He’s failing to embrace his own nature as a commander, and as a result, he makes mistakes.

Burnham and Stamets both ignore Saru’s orders in different ways, with Stamets motivated more by curiosity than ethical qualms. Injecting himself with tardigrade DNA (a major taboo in the Federation, where genetic manipulation is forbidden), he becomes the spore drive’s new pilot. It’s an awe-inspiring breakthrough for him, and in the vein of so many sci-fi stories, he’s going to suffer the consequences of messing with Mother Nature.

In a cute final scene between Stamets and his boyfriend Dr. Culber, Stamets seems perfectly healthy. But after they step away from the bathroom mirror, Stamets’ reflection stays behind, smirking. As one of the oldest tricks in the horror movie book, it’s still incredibly effective. And it may hint at one of Star Trek’s most popular ongoing tropes: the evil doppelgängers of the Mirror Universe.