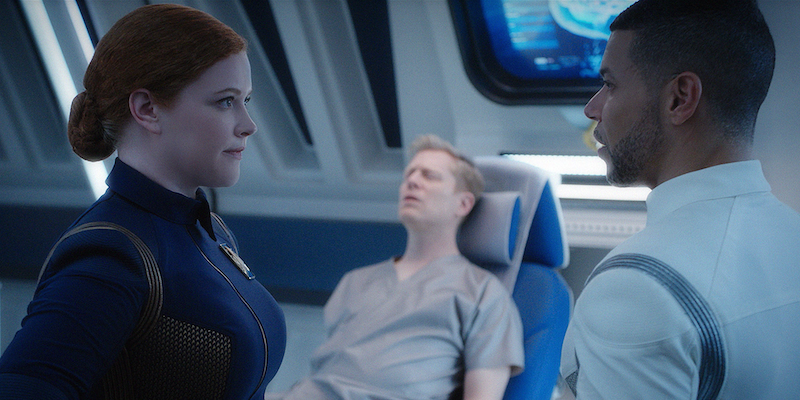 Did ‘Star Trek: Discovery’ play into a problematic gay character trope? Not so fast

Fans are rightfully frustrated about this death—but we have good news.

Warning: This post contains spoilers for Star Trek: Discovery episode 10, “Despite Yourself.”

After heavily promoting its inclusion of a same-sex couple, Star Trek: Discovery just killed one of them off. Dr. Culber (Wilson Cruz) appeared in just seven episodes before dying in this week’s mid-season premiere, and many fans are understandably frustrated. Discovery seemingly fulfilled the much-criticized “bury your gays” trope—an unpleasant TV trend for killing off queer characters.

The show’s creators seem well aware of this issue, which is why they (and actor Wilson Cruz) did several preemptive damage-control interviews before the episode aired. If you’re mad about Culber’s death, we recommend checking some of those interviews out. Without going into detailed spoilers, they confirm that Culber will return.

So, rather than perpetuating a homophobic trend, this may just be another example of a sci-fi show temporarily killing off a character and then bringing them back.

Speaking to Buzzfeed, Cruz and showrunners Aaron Harberts and Gretchen J. Berg assured fans that this wasn’t a “bury your gays” moment. “I give you my word that this is not what that is,” said Cruz. “What’s being planned is something we haven’t really had an opportunity to see LGBT characters experience. I’m really excited about it.”

Harberts said Culber will return, describing his apparent death as “a beginning, rather than an ending.” Referring to Stamets and Culber’s relationship as an “epic love story,” Berg said that there’s “a timelessness and endlessness” to their role on the show. That could mean more interdimensional travel, given what we just saw in episode 10.

Stamets now has the ability to travel between universes using the spore drive, and the Discovery is currently stuck in the dystopian Mirror Universe. This may mean we’ll see Culber’s Mirror Universe counterpart show up—or a different Culber from yet another dimension. Given the dangerous things he did for his fungus research, Stamets definitely seems like the kind of person who’d go on a risky interdimensional quest to resurrect his dead boyfriend.

Speaking to Syfy, Cruz said, “there is a scene in this season that is my favorite thing I have ever filmed in my twenty-five years and I can’t wait for you guys to see it.” We also know that Culber’s favorite music, Kasseelian opera, will appear sometime this season. When we interviewed composer Jeff Russo, he said that he wrote that music with Stamets and Culber’s relationship in mind.

Along with the fact that Cruz and the showrunners came straight out and said Culber will return, we have to remember who plays these two characters. Wilson Cruz and Anthony Rapp have both spoken extensively about the impact of their roles in Star Trek, and the importance of queer representation in general. CBS intentionally cast queer actors with experience in the public eye, knowing that their job would combine typical publicity interviews with political advocacy. In that context, it’s hard to believe that Cruz and Rapp would sign up for the job if one of their characters was quickly abandoned in a classic “bury your gays” move.

As is often the case with Star Trek: Discovery‘s long-game storytelling, we probably need to wait a few more weeks to see how this actually shakes out.