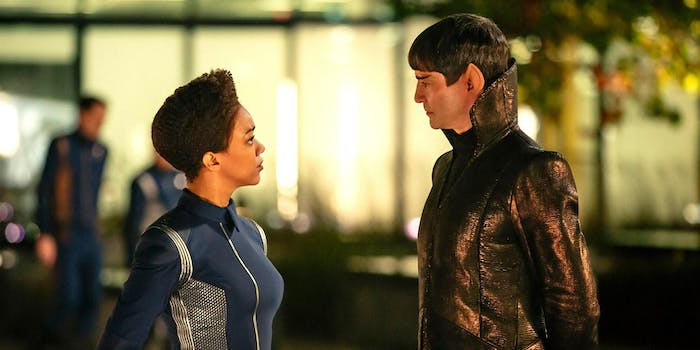 An emotional farewell, with an optimistic look toward season 2.

Star Trek: Discovery‘s Klingon war ends on a suspiciously convenient note, but I can’t bring myself to be annoyed. Michael Burnham’s final speech was just too beautiful. Instead of raising an eyebrow at Discovery’s rapid-fire plot twists, I need to do some Vulcan meditation and control my puny human tear ducts.

As expected, Burnham and Saru rebelled against Mirrorverse Georgiou’s plan to wipe out the Klingon homeworld. Another reminder that when Discovery seems “predictable,” it’s usually a feature, not a bug. This was the obvious (and very welcome) conclusion to their season-wide arc, choosing to embrace Starfleet values over Starfleet orders. The fun part was how they got there, following an entertaining undercover mission in the seedy underbelly of a Klingon city.

Last week on Star Trek: Discovery: Starfleet is pushed to the brink

One of my favorite things this week was Georgiou’s all-encompassing contempt. She doesn’t even try to embody her Federation counterpart, barking insults at her crew and being openly racist about non-human characters. The moment it’s time to beam down to the planet, she reverts to her natural state: a leather corset and a dramatic black cape, while Burnham and the others select more sedate disguises. As it turns out, she fits right in. They beam into an Orion neighborhood, populated by arms dealers, sex workers, and Klingon gamblers. Even the snacks are morally dubious, as Tilly discovers when she buys some space-whale meat from a street vendor. (We also see some fried ceti eels—the creepy burrowing bugs that Khan inserts into Chekov’s ear in The Wrath of Khan.)

At this point I must pause to celebrate the Orion pirates, one of the most under-served of Star Trek’s alien species. Introduced in the Original Series, Orion slavegirls were a transparent excuse for some sexy dancing. Green-skinned babes joined Star Trek’s iconography without receiving much canonical follow-through. Our last example was a minor role in J.J. Abrams’ 2009 movie: Uhura’s roommate who sleeps with Kirk before vanishing from the story. Fanfic writers elevated her to supporting character status, reclaiming her as a sex-positive party girl and a heroic escapee from Orion slavery. Discovery doesn’t go quite this far, but it did manage to include Orion characters in a non-exploitative manner. Success! When Georgiou drags Burnham, Tyler, and Tilly to an Orion brothel, they’re all thoroughly uncomfortable, and the camera gives equal treatment to the male and female strippers. Then Georgiou heads off to enjoy a threesome, leaving Tilly to guard their information-gathering “drone,” which is secretly a bomb.

Tyler uses Voq‘s Klingon memories to find the best place to plant the drone, but Burnham soon realizes this is the wrong decision. She confronts Admiral Cornwell, who explains that in a time of war, “We do not have the luxury of principle.” But Burnham has a simple answer: Right now, all they have is their principles. She and the crew agree to cancel Georgiou’s plan, but it’s too late. The bomb is already planted inside the planet’s volcanic cave system.

This is where we return to one of my few ongoing issues with Discovery, because it wraps up the Klingon war in like two scenes. The conclusion makes sense, but it’s basically illustrated through shorthand. Freeing L’Rell from her Starfleet prison, Burnham hands over the bomb’s detonator and allows her to return to a Klingon ship. There, L’Rell explains about the bomb and positions herself as the new face of Klingon unification. Faced with a decisive new leader holding a cataclysm-inducing weapon, the Klingon fleet turns tail and returns home to regroup.

It’s a fitting conclusion to L’Rell’s role and Starfleet’s moral character arc, but it requires viewers to go with the flow and avoid asking questions like, “Why do the Klingons believe her?” and “Wouldn’t they notice that it’s a Starfleet bomb, giving the Klingons even more reason to attack?” We have to assume that L’Rell’s political acumen does the heavy lifting here, but it would’ve been nice to see that happen onscreen. Still, it’s hard to begrudge the writers for prioritizing Burnham and Tyler’s relationship.

Star Trek has a dubious track record when it comes to romance. Deep Space 9 (and arguably Voyager, if you’re a Tom Paris/B’elanna Torres shipper) achieved some genuinely compelling love stories, evolving over several seasons. The other Star Trek shows, not so much. Discovery is the first to deliver two believable couples in just a handful of episodes, and while both of those stories have unhappy endings, there’s room to develop in future. Yes, even with Stamets and Culber, because Culber’s death is apparently just a temporary setback.

Tyler got a meaty role this week, shifting between heart-melting emotional vulnerability (those eyes!) and embracing his Klingon side. His identity issues are too complicated for him to build a normal life in the Federation, so he returns with L’Rell to the Klingon Empire. That’s enough material for a TV series in itself. He has all of Voq’s Klingon memories beneath Tyler’s compassion and social skills, with Burnham as the lodestone of his moral compass. That makes him an ideal adviser for L’Rell, although their relationship is otherwise about as complicated as you get. She idolized Voq, then became his lover, and finally performed life-changing surgery that Tyler/Voq remembers as torture. And now Tyler believes it’s his duty to bring peace where he previously campaigned for war, unifying the Klingon houses in a way that Voq could never imagine.

Back on Earth, Burnham delivers the quintessential cheesy-but-inspiring Star Trek speech. After surviving the Mirrorverse, the Klingon war, and Lorca’s abuse of power, she and her crew have learned to be optimistic and determined, and to trust in their own moral instincts.

With Burnham reinstated to her original rank, Sarek joins the ship to pick up its new captain from Vulcan. But before they reach their destination, they receive a distress signal. It’s the U.S.S. Enterprise, captained by Christopher Pike and, as Burnham and Sarek confirm with a meaningful glance, with a young Spock onboard. That sets the gears turning for season 2 casting speculation, as well as giving a nostalgic kick to the finale. As the credits roll, we finally hear that 1960s theme music—a continuation of the retro fanfare in Discovery’s own theme.

There’s been lots of debate about Discovery’s role as a prequel. Fans can’t agree if it’s too nostalgic or not nostalgic enough, full of TOS callbacks but taking place in a drastically different atmosphere. Personally, I’m happy with how things balanced out. The smaller references (Tribbles!) never felt disruptive to the main story, and I even bought into the return of Harry Mudd. After a full season of independent stories, there’s room for a Spock cameo—much like the brief appearances from TOS characters in The Next Generation. It also sets the scene for a more upbeat tone than than the start of season 1. But even if things get dark, we’re now safe in the knowledge that Discovery’s crew are a real family unit and can rely on each other to handle what comes next.