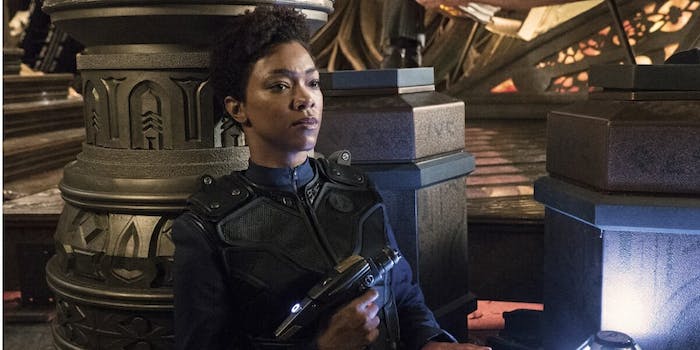 Did the U.S.S. Discovery just wind up in an alternate universe?

Star Trek: Discovery‘s mid-season finale ends with the perfect kind of cliffhanger. Instead of a smartypants plot twist, it’s tantalizingly open-ended. The U.S.S. Discovery could spend one or two episodes trapped in an alternate dimension—or inter-dimensional exploration could be the new premise of the show.

Continuing last week’s standoff at the planet Pahvo, Lorca must decide whether to obey orders and leave, or stay and fight the Klingon Ship of the Dead. He chooses the latter, showing the key difference between his and Burnham’s brand of Starfleet loyalty. While Burnham’s mutiny was desperate and poorly hidden, Lorca is strategic. He orders a warp-speed journey to the starbase, giving them time to figure out how to defeat the Klingons’ cloaking device and jump back to Pahvo.

To cover their tracks, Lorca tells Stamets to fake a medical problem with his spore implant. Except as we know, the problem isn’t fake at all. Stamets has been hiding weird symptoms from everyone including his husband Dr. Culber, and now the cat’s out of the bag. Lorca, being Lorca, is OK with letting Stamets continue while his brain turns to goop. Dr. Culber, not so much.

Saru conceives a two-pronged attack on the Klingons, using the spore drive to outwit their cloaking device. First, Burnham and Tyler will infiltrate the Klingon ship and plant two beacons—which inexplicably emit flashing lights and noises, for maximum peril. Then Stamets will execute 133 jumps around their position, creating a 3D model of the Klingon ship.

On the Ship of the Dead

The mission goes surprisingly well, albeit with personal ramifications for the crew. On the Ship of the Dead, Tyler comes face-to-face with his former torturer L’Rell, who split from Klingon leader Kol last week. Tyler has a PTSD flashback, and Burnham must leave him behind with the injured Admiral Cornwell. In a scene that beautifully combines “totally cool” with “kind of dumb,” she then challenges Kol to a duel. It’s a little implausible for Burnham to avoid getting shredded by Kol’s Mek’leth, but whatever. Her midair beam-out is undeniably awesome.

Kol, meanwhile, still seems like an idiot; a boisterous leader whose power is both temporary and unearned. Fortunately, he gets some great Klingon dialogue this week. Speaking like the translation of an epic poem, he describes the Discovery as Starfleet’s “prized, enchanted” vessel, equipped with “a storied weapon.”

Seeing Tyler’s emotionally complex role this week, I feel like I owe an apology to Shazad Latif. By focusing too heavily on my pet theory that Tyler is a Klingon spy, I overlooked his onscreen role. Whether or not he’s a figment of implanted memories, Tyler is more than just an unanswered question.

Building over just four episodes, Burnham and Tyler’s romance was a pleasant revelation. On the surface, Tyler comes across as perfect Boyfriend Material—a distinct category from cute guys, or male love interests in general. He’s charming without being ostentatious like Kirk or Riker, Star Trek’s most famous flirts. He also has an aura of friendly respect, bucking the expectation for troubled action heroes who express their pain through violence. (Yes, I did just watch Marvel’s interminable Punisher.) Instead of hiding behind a tough facade, Tyler tries to make himself as likable as possible. Then after his breakdown on the Klingon ship, he opens up to Burnham and explains that he survived months of sexual violence from L’Rell.

It’s a sincere and atypical representation of trauma, especially for this kind of show. A man with a complicated memory of sexual assault, allowing himself to be vulnerable in a realistically awkward way. The fact that he speaks to Burnham is telling. Out of the whole crew, she’s probably least experienced with emotional support. Yet Tyler chooses her, confirming that their bond goes deep.

“Into the Forest I Go”

The episode’s title is a quote from naturalist John Muir: “Into the forest I go, to lose my mind and find my soul.” Does it refer to Stamets, or to the whole crew? In his spore-induced delirium, Stamets mutters, “There’s a clearing in the forest,” which could refer to Pahvo or to the mycelial pathways they’ve been traveling all season.

Alongside Saru’s Kelpien background, Stamets is Discovery‘s most thought-provoking sci-fi character. Within his relationship with Dr. Culber, we’re already exploring a heartfelt story about mental illness in a long-term relationship. Then there are the more abstract questions about time, identity, and communication. The more Stamets uses the spore drive, the more he strays from his normal (human) thought-processes. He’s come to view the universe from a new angle, and we’ve barely scratched the surface of what that means.

Once Burnham and Tyler return, Lorca easily destroys the Klingon ship—a victory that comes suspiciously early in the season. Still, that explains why Kol was so weakly characterized. He was never a major villain, just a bit-player in L’Rell’s story. We may even leave the Klingon war behind, as the episode ends with Discovery in an unknown location. Perhaps it’s the dystopian Mirror Universe, an old favorite of the Star Trek franchise.

Rather than being a freak accident, Lorca caused the spore drive to misfire on purpose. Did he have a specific destination in mind, or is he just dodging his Starfleet debrief? Some fans already believe that Lorca is from the Mirror Universe himself, switching places after he lost his original ship. That explains the abrupt personality change observed by Cornwell, although I have my doubts. We already have an explanation for Lorca’s behavior, and it’s consistent with his behavior throughout the show. He lost sight of Starfleet ethics in the heat of war, and will do anything to retain command.

Lorca opens the episode with a suspiciously altruistic decision, protecting Pahvo against Starfleet orders. It’s characteristic for him to want a battle, but I suspect a secondary motive. He wants to avoid Starfleet for as long as possible, in case they replace him with another captain.

How often, if ever, does Lorca tell the whole truth? His desire for control is the only motive we can trust. He constantly manipulates his crew with half-truths, offering Burnham redemption or Tyler a new home. With suspicious calm, he allowed Stamets to take “one last jump” (lol) before leaving the ship, and that jump conveniently went wrong. Now Stamets is isolated from Starfleet Command, and Lorca is still in charge.

Nine episodes in, this feels like a solid place to take a break. The crew is a cohesive unit with engaging relationships, including two troubled yet deeply romantic love stories. We have plenty of loose threads to tie up—Stamets and the spore drive; L’Rell’s hold over Tyler; Lorca’s lowkey obsession with Burnham—but not enough to feel unwieldy. Most importantly, we’ve acclimatized to the show’s unpredictability.

Discovery has already gone through three phases, transitioning from the Shenzhou prologue to a period of gritty darkness, to the current blend of familiar Trek tropes and contemporary longform drama. Despite all the talk of Klingon spies and Mirror Universe twins, I like that you can’t decode what’s going to happen next. Certain subplots reveal intentional clues, but if your show relies on a puzzle-solving attitude from viewers, it becomes a less interesting experience. Discovery strikes a satisfying balance between foreshadowing and leaving the audience, like the Discovery’s crew, in the dark.