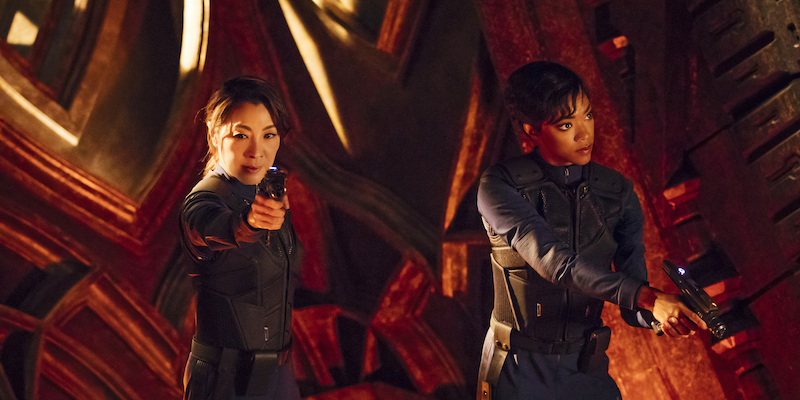 With engaging new characters, smart writing and great production values, it's a gift for fans both old and new.

Starfleet Captain Philippa Georgiou (Michelle Yeoh) and Commander Michael Burnham (Sonequa Martin-Green) are on what might be described as a humanitarian mission, if everyone involved were human. They must save an alien planet’s water supply without alerting the locals, and they execute their duty with warmth, intelligence, and teamwork. Georgiou embodies the greatest ideals of Starfleet and Star Trek itself—and because she’s our hero’s beloved mentor, she’s obviously doomed to die. Georgiou’s demise is predictable to anyone who saw Jason Isaacs in the trailers, yet when her death arrives in episode 2, it’s still shocking and painfully effective.

Set 10 years before the Original Series, Discovery marks a turning point in the cold war between the Federation and Klingons. Represented by Georgiou’s multi-species crew, the Federation celebrates peaceful cooperation while the Klingon Empire is their philosophical opposite. Insular and warlike, the Klingons are held back by feuds between their 24 ruling houses. They need a zealot like T’Kuvma (Chris Obi) to whip them into shape, uniting the Empire in a war against the Federation. As the two fleets face off in frontier territory, Burnham urges her captain to attack, later disobeying a direct order in her desire to start the battle. But her motives are more complicated than mere hotheadedness, rooted in a complex backstory of interplanetary conflict.

Sonequa Martin-Green is an instant star, playing the first true protagonist in a franchise of ensemble dramas. Orphaned during a Klingon attack, Burnham was adopted by the Vulcan diplomat Sarek, who raised her to follow his philosophy of logic and emotional control. Her Vulcan inflection and mannerisms call back to characters like Spock and Tuvok, yet in Burnham’s case, the calm veneer is much more fragile. She uses Vulcan rationality to temper her human passion, with Sarek and Georgiou as her dual parental figures. It’s the kind of role that requires a very charismatic actor, and an unusual kind of emotional range.

After seven years serving with Georgiou, Burnham has learned to embrace her human side. “Despite the risks of our mission, I remain optimistic,” she says in her personal log. “It’s hard not to be, in the face of such beauty.” Backed by an orchestral score by composer Jeff Russo, her face shines with wonder as she explores the Klingon artifact that will soon incite a galactic war. Yes, Star Trek is still sentimental as hell; just as it should be.

Every long-running franchise faces the same problem when launching a new installment. There’s no point in regurgitating old material, but some fans will hate anything significantly different from what came before. And Discovery is significantly different. Fortunately it’s a far cry from J.J. Abrams‘ reboot movies, which jettisoned Star Trek’s core values. Discovery is action-heavy but sensitive, and its writers understand that darkness must be tempered by humor and idealism. Sure, it’s light on jokes, but there’s plenty of banter between Burnham and science officer Saru (an alien played by the eternally wonderful Doug Jones), and Burnham and Georgiou share a rapport born of long familiarity. There’s even something morbidly funny in some of the darker moments, like the entertainingly Kirk-ish scene where Burnham outwits the ship’s ethical programming to get herself released from the brig.

In its 50-year history, Star Trek has run the gamut from deep political allegory to outright farce. One of the most acclaimed episodes is about Captain Jean-Luc Picard being tortured; another is a sitcom about an alien gerbil infestation. Kicking off with a massive space battle between the Federation and Klingons, Discovery clearly lies at the darker end of the scale. But if you’re worried about relentless grimness, I suggest keeping an open mind.

Although episode 2 is rife with death and destruction, the cliffhanger is a classic set-up for Burnham’s arc as a lead character. After being brought low by tragedy, she has nowhere to go but up. And at every turn, her introduction is all about striving toward a better world. Things only went badly when people resorted to violence, and problems were typically solved through ingenuity and collaboration. Contrast this with the cynicism of The Expanse or the dystopian setting of Battlestar Galactica, and you get a clear sense of Discovery‘s moral and emotional core.

Threatened by the multiculturalism of the Federation, Discovery’s Klingons have obvious roots in contemporary politics. According to the messianic extremist T’Kuvma, the only way to maintain Klingon cultural purity is by uniting against a common enemy.

T’Kuvma is such a purist that he bypasses centuries of Klingon convention. Ignoring his aristocratic rulers, he appoints the illegitimate Voq (“Son of None”) to a ceremonial role, valuing Voq’s loyalty above the birthright of a more “noble” warrior. He’s the antithesis of the Federation’s diplomatic credo, supported by a more thoughtful background than Star Trek’s earlier Klingons. Production design is a vital component here—another first for Star Trek, which couldn’t afford such impressive visual effects in previous shows.

The Starfleet sets are beautiful but ultimately conventional sci-fi fare. By contrast, T’Kuvma’s ship looks truly alien. Crenellated with metallic curlicues and lit with flaming torches, it suggests a longstanding passion for art and beauty in Klingon culture. Armored with a protective layer of coffins, it also poses a gothic threat while offering a subtle question to longtime fans.

Previously, Klingons showed little care for their dead. Their souls went to the afterlife, and their bodies were seen as empty husks. By showing deep reverence toward the dead, T’Kuvma is an unprecedented outlier. Before the battle is even over, he uses tractor beams to retrieve fallen warriors for interment in his flying graveyard—thus creating a strategic opening for Captain Georgiou. So while Starfleet pragmatically leaves its dead to float in space, they exploit a Klingon’s religious beliefs as a military weakness. So much for the tolerant left.