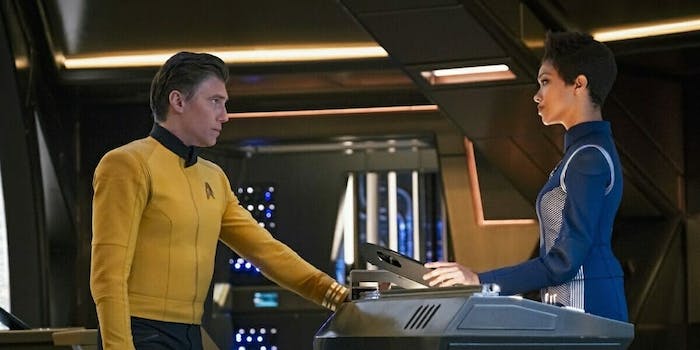 A spoiler-free look at what to expect from the series.

Star Trek: Discovery returns on Thursday, and we got a preview of the season 2 premiere. Titled “Brother”—a reference to Michael Burnham’s adoptive brother Spock—it picks up where the season 1 cliffhanger left off, with the U.S.S. Discovery meeting the U.S.S. Enterprise and kicking off a new story arc.

We’ll return after the episode airs with an in-depth recap, but for now, here’s a spoiler-free look at what to expect.

Season 1 was an origin story for Discovery’s crew, charting their course from wartime isolation and bad leadership to a sense of unity and optimism. Since previous Star Trek shows were more friendly and comedic from the start, the dark tone of the first few episodes inspired a mixed response. The season 2 premiere feels like an explicit statement that things are different now, with a lighter atmosphere—and lots of screentime dedicated to friendships between the crew.

Michael Burnham is no longer a lone wolf, Ensign Tilly is having a lot of fun with her new promotion, and the bridge crew feels like a real community of friends and co-workers. With the exception of science officer Stamets, who is mourning the death of his husband, it’s as if a dark, Lorca-shaped cloud has lifted, leaving the crew refreshed and excited to solve whatever problems come their way.

With another awkward change of showrunners behind the scenes, CBS’ Star Trek franchise overseer Alex Kurtzman took the reins midway through production for season 2 and actually directed the premiere.

Kurtzman usually writes blockbusters like Transformers, The Mummy, and (obviously) the recent Star Trek reboot trilogy, and is now producing a whole raft of new Trek shows at CBS. Since Trek is known for being more cerebral than action-based, he’s a controversial choice. We can’t predict how he’ll influence the rest of the season, but for now, I’d say the premiere actually achieves a more classically sentimental Star Trek tone than much of season 1. There are some explosive action sequences too, but a) they’re great, and b) they’re character-focused and solidify the show’s vision for Starfleet values. So far, I’m cautiously optimistic that Kurtzman won’t continue J.J. Abrams’ mistake of trying to turn Star Trek into Star Wars.

It doesn’t focus too much on Original Series characters

Taking place a decade before the Original Series, Discovery already featured some vintage tie-ins like Michael Burnham’s familial connection to Spock. Absent from season 1, he’s one of several Original Series characters with a key role in season 2. For some fans, this inspired concern that Discovery will lean too hard on nostalgia, which is a particular issue with regards to Spock. Leonard Nimoy’s tenure saw Spock and his relationships evolve over the course of decades, and Discovery will have to prove that his backstory is a worthwhile use of screentime that could otherwise go to new material.

Fortunately, the season 2 premiere is light on nostalgia and introduces its main Original Series callback (Captain Christopher Pike) as if he’s an entirely new character. Pike was Kirk’s predecessor on the Enterprise, and the episode begins with him transferring over as Discovery’s new temporary captain, offering a very different kind of leadership to the manipulative Gabriel Lorca.

If I were to use one word to describe Pike, it’s “wholesome.” The trailers introduced him with a real Dad Joke vibe, and he quickly makes his mark as an idealistic leader who loves his job and respects his officers. It’s a realistic depiction of how a captain can shape the mood of an entire ship, making it clear that season 2 is off to a fresh start.

Star Trek: Discovery returns on Jan. 17 on CBS All Access. Our spoiler-filled recap will arrive shortly after the episode airs.