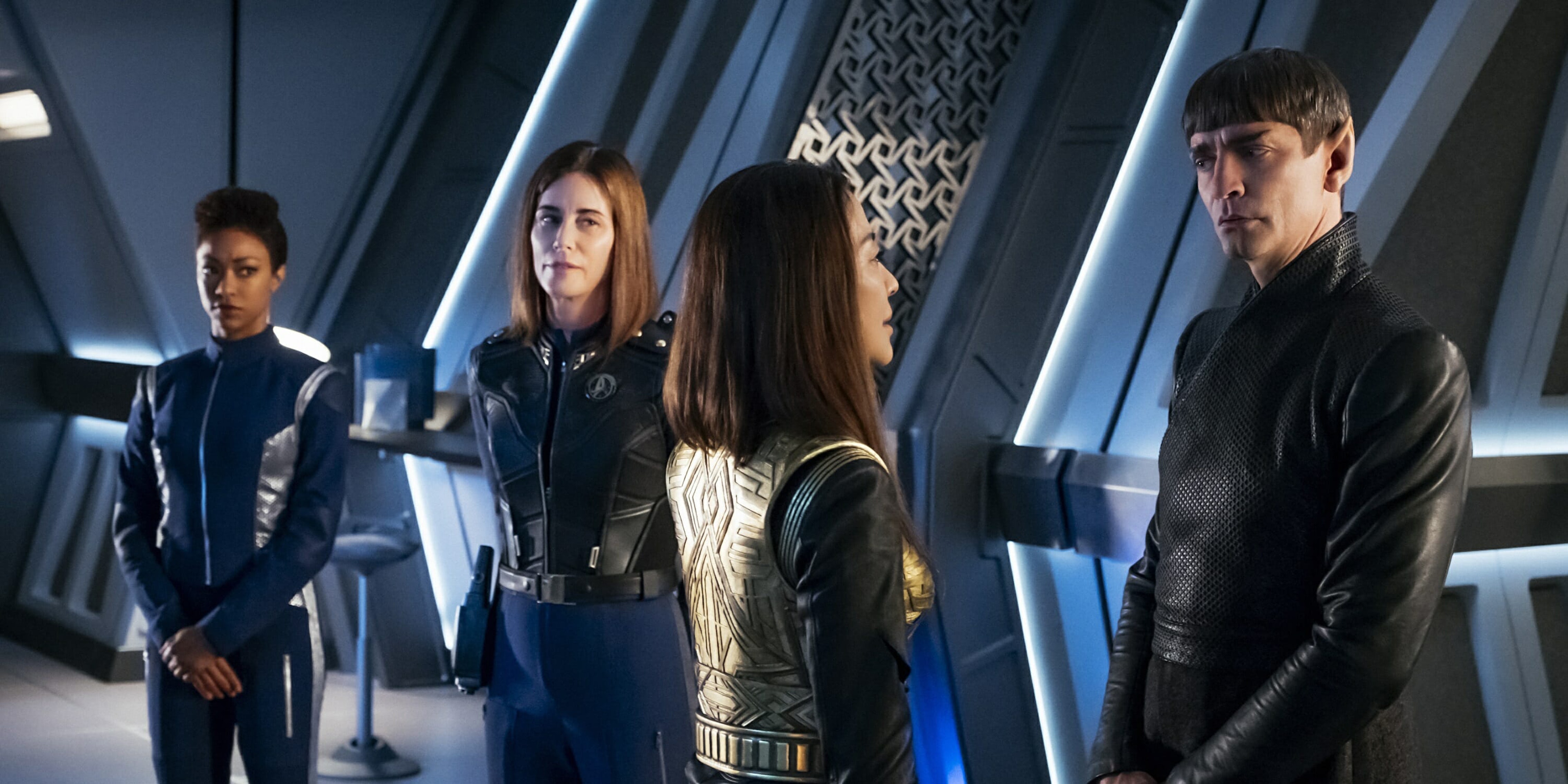 ‘Star Trek: Discovery’ episode 14: Starfleet is pushed to the brink

To end the Klingon war, Starfleet must make a terrifying moral choice.

Star Trek: Discovery‘s first season is too short. I don’t just say that because I’m greedy for more episodes, but because there’s an intimidating amount of material to wrap up in next week’s finale. It’s hard to see how the Federation can escape its current predicament without resorting to time travel and delivering the show’s fourth reboot in just 15 episodes.

Returning from the Mirror Universe nine months late, the Discovery arrived in the middle of a war zone. The Klingons have effectively defeated Starfleet, with Sarek and Admiral Cornwell as two of the remaining leaders. To complicate matters further, Discovery’s uninvited guests continue to cause problems. Burnham brought the evil Emperor Georgiou onboard, L’Rell is still in the brig, and Tyler is apparently Tyler again – although I have some qualms about the ethics of “saving” him instead of Voq. It suggests a rather skewed conception of personhood, valuing Tyler’s constructed human personality over Voq’s original Klingon body and life.

Right now, it’s unclear why Cornwell and Sarek aren’t using Tyler’s Klingon memories for strategic intel. Instead, the more compassionate Saru allowed him to return to his quarters, where we witness his messy breakup with Michael. This is another moment where I wish we had more time because there’s a lot of baggage to unpack in just one scene. Tyler wants Michael to stand by him and help him recover, which seems like a big ask considering the fact that he (kind of) tried to murder her. At the same time, Michael doesn’t handle the situation very well either. She thinks his recovery should happen alone (like her own atonement for her “crimes” in the Battle of the Binary Stars), forgetting how much she learned after forming relationships with her new crewmates.

Shazad Latif and Sonequa Martin-Green are wonderfully emotive actors, which is why this love story worked despite its relative lack of screentime. Their breakup makes sense in the circumstances—a looming wartime emergency, Michael’s lack of experience with relationships—but it still feels like we needed more time with them together, untangling their many issues. And who knows, maybe Tyler will survive the finale! I’m still rooting for that human/Klingon Romeo and Juliet romance.

With Emperor Georgiou onboard, Starfleet has a devil on its shoulder. Based on her tactical advice and L’Rell’s belief that the Klingons will never back down, Cornwell and Sarek decide that Starfleet’s methods have failed. They plan a last-ditch attack on the Klingon homeworld, jumping inside the planet’s cave system so they can select vulnerable military targets from within. At least, that’s what the crew believes. Cornwell and Sarek actually plan to destroy the planet entirely, and to do so, they put Georgiou in command. Cornwell actually announces her as the original Captain Georgiou, which is a bit of a head-scratcher. Didn’t most of the crew know that Georgiou was also the Mirroverse emperor? It can’t be hard to put two and two together and realize she’s an imposter.

Last week, I wrote this about Discovery’s moral journey:

“Star Trek: Discovery [is] a season-long character arc for the crew as a whole, structured like a single episode of the earlier shows. The crew began in a place of moral uncertainty, lacking confidence under Lorca’s wildly unethical leadership. They floundered during chaotic circumstances, but now that we’ve reached the final act, they’ve rediscovered their right to self-determination.”

Cornwell and Sarek’s plan amounts to genocide, but as a survival strategy for the Federation, you can see why they chose it. Of course, the next question is whether the Federation will truly “survive” if it abandons its core values. With Georgiou in charge, the answer is pretty obvious. This way lies darkness and despair, and there’s no way the season can end with our heroes blowing up a planet. Just in case you still weren’t already sure, we see Tilly and Saru become the moral voice of authority—two characters who began the season as nervous dorks but found inner strength during a time of crisis.

This scenario seems tailor-made to end any argument about Discovery’s moral message. Burnham and Saru have to make the right choice because otherwise what’s the point of this entire season? Longtime Star Trek fans will also notice this puts Discovery in a very familiar position. In previous series, there’s a longstanding trope of the main crew acting as a unit against flawed orders from Starfleet Command. That didn’t happen in earlier episodes because Lorca was too powerful, and there was no cohesion among the crew. Now, they’re a community. We see Tilly inspire her crewmates to treat Tyler with kindness while Saru provides a kind of selfless leadership that Lorca never achieved.

It took them a while, but they got there in the end.