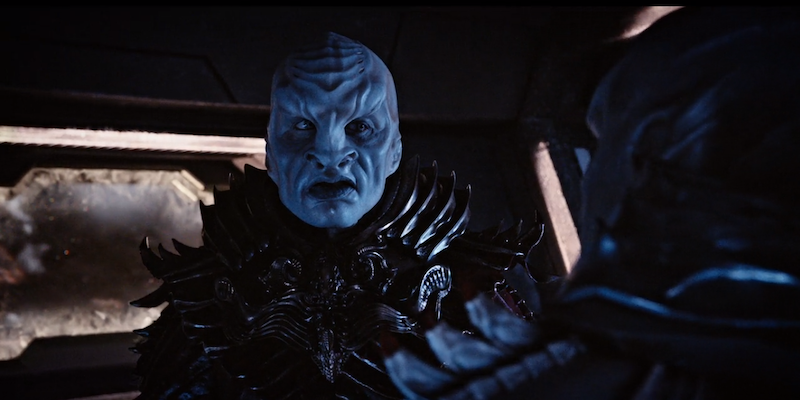 One of the main actors in 'Star Trek: Discovery' may be someone else in disguise.

One of the main actors in Star Trek: Discovery may not actually exist. And no, this isn’t one of those crackpot “Avril Lavigne was replaced by a lookalike” conspiracy theories. It’s a surprisingly plausible idea.

The theory begins with Discovery‘s early casting announcements, when Shazad Latif was cast as Klingon officer Kol last year. Discovery went through some growing pains during pre-production, including Kol being recast with the actor Kenneth Mitchell. Shazad Latif switched roles to play Starfleet officer Ash Tyler. He’s credited among the main cast in Discovery‘s title sequence, and appeared prominently during the promotional tour, even though Tyler only made his first appearance in episode 5. Usually, an actor must appear in almost every episode to be considered a main cast member.

This is where things get complicated—and potentially spoilery for future episodes. According to some fans, Shazad Latif has been in almost every episode. They believe that Latif also plays the Klingon torchbearer Voq, and that Voq has disguised himself as the human “Ash Tyler.” That means Javid Iqbal, the actor who plays Voq, is not actually a real person. He’s just a name CBS put on the credits, to avoid spoiling the twist.

Who is Javid Iqbal?

Javid Iqbal’s IMDb page contains only one credit: Star Trek: Discovery. His only photo is in full Klingon makeup as Voq. He’s the only cast member who never appeared in the show’s promotional tour, and he doesn’t seem to have any social media presence. Basically, he’s a ghost. Although hey, maybe he’s just very shy!

There’s plenty of evidence to support this theory. Let’s start with Tyler, who made his debut in episode 5. Captured by the Klingons during the Battle of the Binary Stars, he’s been trapped in a Klingon prison for months. He allegedly survived because the Klingon captain “took a liking to him,” but as we pointed out in this week’s recap, he’s already a suspicious figure. Even if he is just a regular human Starfleet officer, he could have been brainwashed during his time in prison. Did the Klingons allow him and Captain Lorca to escape so they could plant Tyler as a spy onboard the U.S.S. Discovery?

As for Voq, his last appearance was pretty intriguing. In episode 4, he was exiled from his own ship and given a mysterious opportunity by his ally L’Rell. She said she would take him to the House of the Mokai, a matriarchal Klingon family, where they would “expose him to things he never knew possible.” This would give him some kind of power to fight the Federation… but it would come “at a cost.” He would have to sacrifice “everything.”

What does “everything” mean, here? That’s an important question in Voq’s case, because he seemingly has nothing left. He lost his ship and his mentor, and his crew left him to die. Arguably, his ultimate sacrifice would be to abandon his Klingon identity. Did the Mokai transform him into a human? To support this, the Klingon captain who “captured” Ash Tyler is a woman, who told Lorca that she’s “descended from spies.” She could be a member of the Mokai.

Can a Klingon become a human?

The short answer is yes. Star Trek has a long history of characters disguising themselves as other species. Kirk and Picard both used cosmetic surgery to go undercover as Romulans, and Voyager featured a Cardassian who genetically engineered herself to look like a Bajoran. In the Original Series, which takes place 10 years after Discovery, we meet a Klingon spy who disguises himself as a human.

So, the technology exists to make Voq look like Ash Tyler. The Mokai may even have used the Augment Virus to do it.

In the Original Series, the Klingons looked relatively human. They only started looking “alien” in the movies and The Next Generation, which had a bigger budget for special effects. Most fans just ignore the difference between 1960s-era Klingons and the modern version with cranial ridges and fangs, but Star Trek: Enterprise also provided a canonical explanation. A century before Discovery, the Klingons accidentally created the Augment Virus. It made Klingons lose their distinctive forehead ridges, giving them the “human” appearance of the Original Series.

Looking at it this way, Voq had the means, motive and opportunity to disguise himself as Ash Tyler and infiltrate the U.S.S. Discovery. Of course, he only had six weeks to become a convincing human Starfleet officer, but hey. Stranger things have happened, especially in Star Trek.