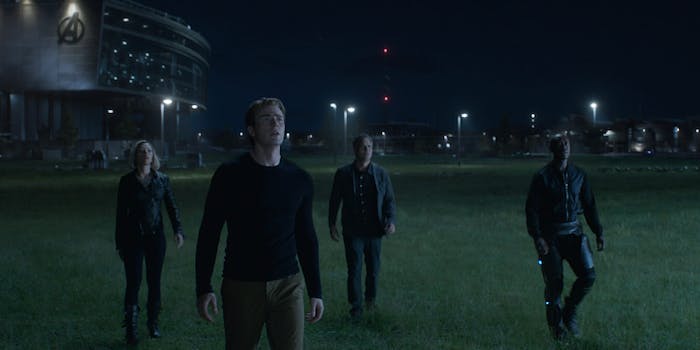 Spoiler bans are completely out of control

The internet’s spoiler discourse, recently sparked by the final season of Game of Thrones and Avengers: Endgame, came to another boiling point this week.

Keanu Reeve’s cameo in Always Be My Maybe, where he played a fictionalized version of himself, went from cute celebrity pop-in to contentious dividing line. Ahead of its May 31 premiere on Netflix, the streaming giant had journalists seeing the film early, including at the Daily Dot, sign a form promising that they wouldn’t reveal Reeves’ character and the song “I Punched Keanu Reeves,” which played as the credits rolled. The conversation about spoilers in a romantic comedy (!!) led to a Hollywood Reporter interview with Endgame directors Joe and Anthony Russo, who urged fans ahead of both Avengers: Infinity War and Endgame not to spoil the films for those who couldn’t see it right away. There were even accompanying hashtags with those efforts: #ThanosDemandsYourSilence and #DontSpoilTheEndgame.

Referencing the two-week “spoiler ban” on Endgame, the Russo Brothers wished that the ban had lasted for three weeks but blamed journalists who “said they’d begin putting spoilers in headlines” for ruining the fun. “That feels like what society is going to allow,” Joe Russo said.

You remember Endgame’s spoiler ban, of course. You know, the one that we literally learned about in a Good Morning America interview that aired on May 2 where they announced that the spoiler ban would lift a few days later. That day (May 6) was also the same exact day that the Spider-Man: Far From Home trailer dropped online… with an 11-second spoiler warning attached at the beginning. The Russo Brothers did not mention the Far From Home trailer—which explicitly refers to the death of Iron Man—and put blame on journalists who were going to ruin things for fans.

The Russo Brothers acknowledged that their call to “hold back the dragon” for those two (but ideally three) weeks is their way of trying to get people to “just be respectful of others and how they experience the film.” It’s a valiant effort if not a tad obnoxious. But in practice, thanks to the blatant spoiler-phobia affecting the filming of Endgame, its marketing campaign, and the expectations set around one of the most anticipated films in years, there was pushback for talking about any part of Endgame after we saw it—even with the use of easily mutable hashtags.

Those conversations were still happening online and so two weeks never made sense. I avoid spoilers ahead of something I’m watching more often than not. But to try and have the cultural conversation adhere strictly to a self-imposed spoiler ban after the release of a film is, frankly, bullshit.

What constitutes a spoiler—and does it even matter?

We’ve been debating about spoiler warnings for years; Roger Ebert wrote about it in 2005 with the Awl weighing in in 2010 and BuzzFeed in 2014. What’s changed over the years is what we see as a spoiler as well as how we talk about films and TV shows online—not to mention the tools we can use to mute it out of our feeds. Although we’ve been hearing for years that spoilers are actually good for us and that knowing what happens actually allows you to enjoy a story more, it matters very little to people who care very much about whether something is spoiled.

Certain plot twists and character deaths have always been included under the spoiler umbrella, but what we consider to be a spoiler is growing. It can now include whether or not certain characters are in a film or show; what they might do in the film; who they might interact with; character names, backstories, and actions; costume details; trailers, behind-the-scenes videos, and TV spots; and cover stories featuring the cast and crew of an upcoming franchise film that’s shared on official social media accounts. Those pleas to keep things spoiler-free, such as the one Quentin Tarantino issued ahead of the world premiere of Once Upon a Time in Hollywood, can be so vague that they become an early way to stifle valid criticism of a media property as well cultivate distrust of critics.

Even the indication that there is a need for a spoiler warning, like with articles about James Holzhauer, the Jeopardy! contestant whose 32-day winning streak came to an end this week, is in and of itself a spoiler because why else would you attach a spoiler warning?

Along with what a spoiler even is comes the other question we’ve been going back and forth on for far too long: How long is something a spoiler? Is a spoilable plot point fair game as soon as an episode of a very popular TV show airs? A few weeks? Months or years? And the further we get from a film or show’s release date, how mad can we reasonably get when we stumble upon one of these plot points? We don’t have a much of a consensus other than, if it’s been several years, well, that’s on you.

Some Game of Thrones fans famously kept some of the more devastating twists of A Song of Ice and Fire from show-only viewers in earlier seasons so that they could have the same experience and range of emotions that book readers did when learning about Ned Stark, Oberyn Martell, and the Red Wedding. (Book readers also cynically did that because it was fun to watch their friends squirm during devastating moments.)

I’m watching a cult show that ended recently with a group of friends who are preserving the experience for those of us who don’t know what will happen next. But more often than not, staying spoiler-free is a pipe dream.

The conversations around spoilers are also about ego and what creators want from their audience: Fans who come in with a clean slate, eager. As a result, we’ll see #KeepTheSecrets pins (from Cursed Child and Game of Thrones) and cutesy hashtags. We get shamed for talking openly.

Many people don’t want to be spoiled, sure, but many others do.

We read the Wikipedia pages of horror films instead of seeing a film—or do it to prepare to watch that film so that we can get through it. We might seek out spoilers to make peace with a show’s polarizing ending that leaked early so that by the time it airs, we can concentrate on its other attributes. Or maybe we just want to know what happened.

Yet those who openly seek out spoilers are shamed and have the validity of their fandom questioned, often by the people who make the things they love.

The courtesy of spoiler-free conversations should last until a show or film is released. But once it’s out in the open, it’s fair game.

Endgame gave us a lot to talk about in the days after the film was released—and led to some fascinating conversations and ways of looking at the film. But one of the biggest problems with that two-week spoiler ban window? By the time it lifted, we had already moved on to trying not to spoil Game of Thrones.