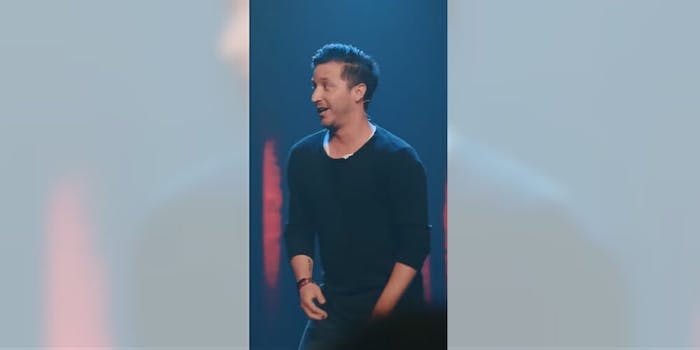 'I just saved you guys like $12 on an overpriced movie, calm down.'

A youth pastor just spoiled one of the biggest moments in Avengers: Endgame for thousands of unsuspecting teens during his sermon.

Avengers: Endgame hit the box office on ‎April 26 and raked in more than $1.2 billion in its opening weekend, giving it the biggest opening weekend of all time. Some have even predicted that it could surpass Avatar to become the highest-grossing worldwide film of all time.

Still, not everyone has had a chance to watch Endgame yet–with some going to great lengths to avoid spoilers (or avoid spoiling it for others).

But those who have not seen the film yet probably thought that church, of all places, was a safe space for them to have a blessed, spoiler-free time. This pastor thought differently.

“Maybe you’re talking about the latest Avengers movie or something and how Iron Man’s dead,” the pastor says while trying to make the word of the Lord relatable.

His audience, a room full of teens, understandably let out a collective groan.

“It’s been a week, it’s been a week,” he says, while trying to mitigate the crisis he just single-handedly created. “I just saved you guys like $12 on an overpriced movie, calm down.”

Those who have seen the film by now know that Robert Downey Jr.’s character Iron Man is one of the two major characters to die in the film. He sacrificed himself at the end of the film to erase Thanos from existence.