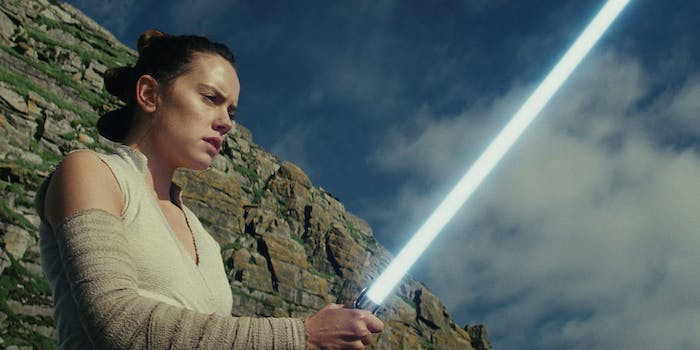 Did a ‘Star Wars: The Last Jedi’ ad drop a spoiler? It depends on who you ask

What constitutes a spoiler in 'Star Wars' marketing?

We’re eight days out from the theatrical release of Star Wars: The Last Jedi, and the Lucasfilm marketing machine is operating in hyperdrive. Stores are stocked with merchandise, theories abound, and the commercials are everywhere. Although most of what we’ve seen is familiar, one shot from a recent trailer is raising eyebrows.

The latest trailer clocks in at 30 seconds and, with the exception of the “in VIII days” graphic, it’s like many of the other trailers we’ve seen. It quickly cuts through footage paired with ominous-sounding quotes, but the final shot is something we’ve never seen before.

By now it’s not a secret that Rey wields a lightsaber—as her training on Ahch-To with Luke demonstrated—but it’s whose lightsaber she’s holding that is coming as a major surprise. And there’s no mistaking the unstable spark of that crossguard lightsaber.

We’ve previously noted that everything you see in a Star Wars trailer is not what it seems. Disney and Lucasfilm want to preserve those big moments for when fans can finally watch them on the big screen, not waste them in a movie trailer or a “blink and you’ll miss it” TV commercial. We saw this in The Force Awakens with the revelation that a Force-sensitive Rey summoned Luke Skywalker’s old lightsaber into her hands even as Kylo Ren—Luke’s nephew and Darth Vader’s grandson—attempted to summon it himself. That wasn’t even hinted at in the marketing, but the fight preceding it (between Finn and Kylo Ren) was. We suspect that’s the case for The Last Jedi.

We didn’t expect is to see Rey wielding Kylo Ren’s lightsaber in the tail end of a TV commercial posted to social media (and airing freely on television). It’s a big moment for sure, and might even only be the beginning of the fan debate on whether marketing can be considered a spoiler. Is it? It depends on how you interact with the marketing in the first place.

It absolutely is a spoiler—for some fans, anyway

Some Star Wars fans like going into the movie “clean,” or without being exposed to any of it beforehand. They won’t watch any trailers. They won’t click on cast and crew interviews or behind-the-scenes videos, they avoid merchandise—yes, even the porgs—and any online conversation. Director Rian Johnson had sympathy for that section of Star Wars fandom as he told those who didn’t want to go in knowing anything that they probably shouldn’t watch an upcoming trailer in a tweet that was widely misinterpreted.

They might even go as far as to mute or block mentions of any Star Wars-related phrases or names for weeks or months. With the first screening of The Last Jedi happening this Saturday, the next week will test those precautions. For those fans, of course, seeing Rey take up Kylo Ren’s lightsaber with two members of the Elite Praetorian Guard on either side of her would be a considerable spoiler.

But it’s also the nature of the clip itself that is raising questions. Would Lucasfilm really just casually drop a big moment like that into a 30-second ad?

Another valid argument about the clip is that of course it isn’t a spoiler. We’re seeing a completely out-of-context clip that’s maybe two seconds in length out of a movie spanning two-and-a-half hours. It’s hardly a drop in the bucket time-wise, and although it has the potential of being a major moment, it’s also one that got approved before we ever saw it.

Since we got the first Last Jedi trailer in April, we’ve probably seen less than 10 minutes of footage in total. Many of the clips we have seen reuse stuff from other trailers or recut it in a way to suggest something different than what we first saw. Expectations for The Last Jedi may be even higher after The Force Awakens‘s massive critical and financial success, and with every frame analyzed to the pixel, the trailer editors are likely very careful about which scenes are used in ads.

“I think the trailers do a very good job even when they’re using manipulation in various ways,” Johnson told Slashfilm. He added that the trailers “never misrepresent the movie.”

It’s also important to note that the scene in question is one we’re watching without any prior context. We knew that Rey would eventually end up face-to-face with Supreme Leader Snoke in his throne room, where members of his Elite Praetorian Guard have been spotted; Snoke appeared to torture Rey in the full trailer from October. Recent promotional photos showed Rey and Kylo Ren in the same room after their lightsaber duel in The Force Awakens, and Rey is wearing a different outfit than the one she dons on Ahch-To.

All of the pieces fit together for Rey to summon Kylo Ren’s lightsaber, but we’re still lacking important context that probably would be a spoiler. Whose side is Rey on? How did Kylo Ren allow her to take his lightsaber—and was he even capable of stopping her? What happened to her own lightsaber? Is she even in control of herself right then? And who is she planning to fight with that?

Right now, all it is is an incredibly cool moment.

If Lucasfilm is showing us that moment, what does that mean for The Last Jedi?

Rey wielding Kylo Ren’s lightsaber is now out there in the world. It’s going to be scrutinized to the very last frame as we try to parse through Rey’s thoughts and motivations. The bigger question (among many we hope The Last Jedi will answer) is what aren’t we seeing?

Some of the bigger plot points from The Force Awakens, such as Han Solo’s death and Rey’s Force abilities, were kept under wraps until we could see it in theaters (although some found out about Rey through merchandise released too early). The same thing could happen with The Last Jedi, with the revelation of Rey summoning Kylo Ren’s lightsaber being minuscule compared to what the film might eventually reveal.

What will it be, and how will it affect our heroes? Your guess is as good as mine. But after The Force Awakens this movie has some Jedi-sized footsteps to follow and we can only imagine how The Last Jedi might top it.