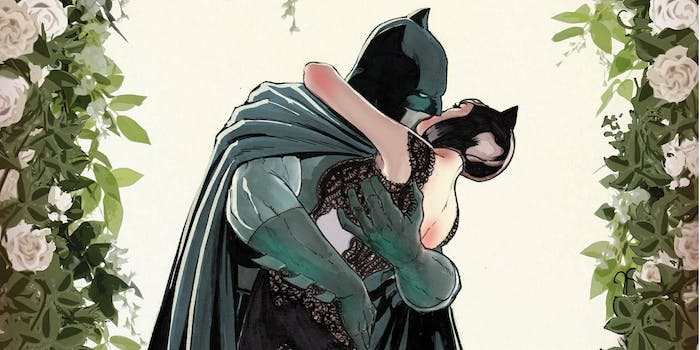 Fans have been anticipating this issue for months.

The latest iteration of the Batman comics has been setting fans up for the moment they’ve been waiting for, but just days before that monumental issue’s release, DC Comics casually revealed how it would all play out.

Batman #50, which will be released on Wednesday, was an issue more than a year in the making: Fans would finally see the long-awaited wedding of Batman and Catwoman. They’ve had their ups and downs, having encountered one another countless times over Batman’s nearly 80-year history, and the wedding was sure to be huge. Thanks to a New York Times exclusive, fans know exactly what will happen in the issue.

It’s evident from the title of the article published in the Weddings section Sunday just how it would go, but if the conclusion escaped some fans, it became clearer once you read the article: Batman and Catwoman didn’t get married.

The article serves as a recap of Batman #50, breaking down what happens within the pages of the highly anticipated issue. It details the mindset of Bruce Wayne and Selina Kyle as they each get ready for the big day as well as the letters they write to one another. Bruce is willing to accept Selina as she is, but Selina realizes what marriage will do to Batman. She determines that marrying Bruce will kill Batman and endanger lives.

“How can I do that,” Selina says in her letter to Bruce. “To save the world, heroes make sacrifices.”

The end of the issue shows Bruce realizing that Selina left him at the altar as the two leap off different buildings—and the dance between them continues.

Spoiling big comic book events like the outcome of Batman and Catwoman’s planned nuptials ahead of time isn’t a fluke, it’s a marketing strategy meant to garner more interest in a particular issue. For example, USA Today had the exclusive on Catwoman’s response to Batman’s wedding proposal in Batman #32 days before the issue was released, but that particular reveal from October had quotes from Tom King, who writes Batman, to offer insight.

This time around, King appeared to have had nothing to do with DC Comics’ decision to reveal the outcome of Batman #50 ahead of time. While keeping his feed spoiler-free, he informed his followers to be careful if they wanted to wait until Wednesday to find out what happened.

Ugh. Batman 50 spoilers are now out there. Ignore/avoid them (or try to) and read the issue.

Im pissed about things and excited about other things. I have no idea how to comment on anything without spoiling everything.

Batman 50 is still out Wednesday. I’m incredibly proud of the issue; I hope you pick it up. You have questions; the answers are there.

The New York Times article revealing the outcome of Batman and Catwoman’s wedding is descriptive, and for some, it might be enough to ruin something they’d been looking forward to for some time. Others will argue that it’s more in the execution: it’s one thing to see quotes from the issue out of context, but another to see the entire scene play out. (Mikel Janin drew the issue, June Chung is the colorist, and Clayton Cowles did the lettering.) The debate will likely continue after the issue is released and readers are able to discuss the practice in more detail.

It’s a big moment, one that’s several issues in the making (even if it’s not the one fans anticipated). And come Wednesday, it’ll change everything.