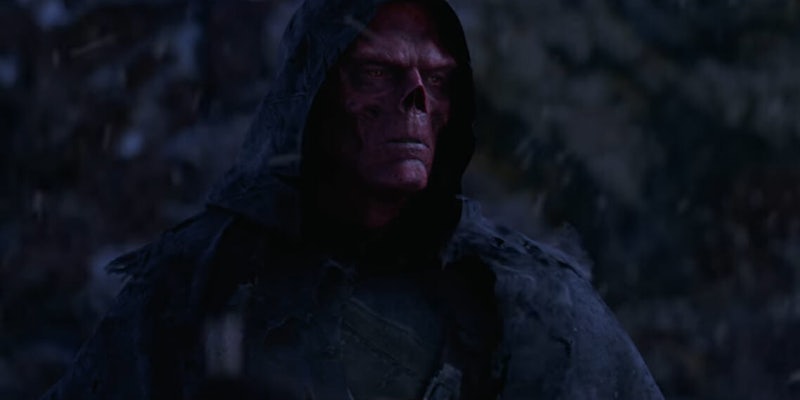 The jury is out.

The long-awaited follow-up to last years devastating Avengers: Infinity War premiered this week. The Marvel blockbuster will certainly continue selling out theaters through the weekend, and well into next week. But as fans finally get some closure after Infinity War‘s crushing ending, they have questions about the characters not featured in trailers.

One character whose fate is still uncertain is the villainous counterpart to Captain America, Red Skull. In a recent interview with DubaiLAD at Middle East Film & Comic Con, Ross Marquand—who took over the Red Skull mantle after Hugo Weaving’s 2011 portrayal—admitted that he’s unsure what became of the Hydra commander.

Red Skull made an appearance on the planet Vormir in Infinity War. Appearing as a blood-red floating specter, Red Skull guided Thanos and Gamora to the soul stone. He then watched as Thanos sacrificed his favored daughter to obtain it. Directors Joe and Anthony Russo revealed that Thanos’ retrieval of the soul stone freed Red Skull from his curse. This would permit the character to leave Vormir if he so chose.

Marquand admitted to DubaiLAD that he’s wondered after Red Skull’s fate himself. “That was a question that I had as well,” he said. “But Marvel is very tight-lipped about it, they don’t really reveal a lot of those secrets, so your guess is as good as mine, I have no idea. He might be in the Soul Stone with everybody else, you never know.”

We may have gotten a hint, however, from several cast lists. On IMDb, for instance, Marquand is listed as a cast member in Avengers: Endgame. This tidbit guarantees that we will get at least a glimpse of the Walking Dead star in the follow-up to Thanos’ snap.

In the DubaiLAD interview, Marquand noted that his Red Skull is “vastly different than the one that Hugo played 10 years ago in Captain America.”

“Because he’s been broken by his ambition,” he said. “He’s 85 years in the future and his goal was to kind of dominate the world, and he lost. Not only did he lose, he lost his life, kind of. I think it’s a really sympathetic version of Red Skull, and a version of him that we’ve never seen before.”

Marquand’s IMDb page may have revealed his presence in Endgame, but we still have no idea what role he will play. Whether Red Skull’s life was among those lost following Thanos’ snap or not, the commander of Hydra is headed back to the big screen.