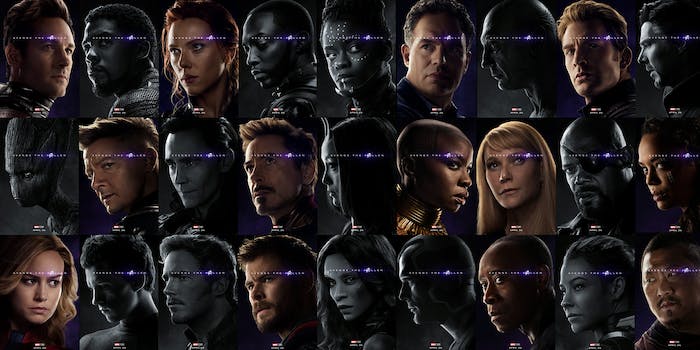 As expected, some beloved characters died in Avengers: Endgame. To celebrate their legacy in the Marvel Cinematic Universe (MCU) we decided to publish in-universe obituaries marking some of their lives and achievements. After 22 movies, future Marvel films will look a lot different.

Scroll past this image to enter spoiler territory. (If you’re interested, here’s the full list of who dies in Avengers: Endgame.)

Tony Stark, the visionary heir to Stark Industries and inventor of the Iron Man armor, died Thursday during the final battle against Thanos. His death was announced by Avengers leader Steve Rogers (aka Captain America), who confirmed that Stark died, in Rogers’ words, “Saving the world.” Together, they led the team of heroes who orchestrated Thanos’ defeat.

Born to industrial tycoon Howard Stark and his wife Maria, a philanthropist, Tony Stark grew up surrounded by wealth and privilege—although it wasn’t always a happy childhood. Exhibiting a talent for engineering from a young age, he registered his first patent at age 9: a prototype electric car. Accepted to MIT at 14, he attracted attention for his extravagant lifestyle as well as his academic prowess. His teens were beset by the twin pressures of early fame and a troubled relationship with his father—a rift that never got a chance to heal, as Howard and Maria Stark were killed in 1991. Believed at the time to be an accidental car crash, it was later revealed to be a Hydra assassination perpetrated by the Winter Soldier, aka James Barnes.

Inheriting Stark Industries at 21, Tony Stark led the family business into a new era. His innovations ranged from robots to rocket launchers, strengthening the Stark family’s close relationship with the U.S. military. By his mid-20s, he’d already built the artificial intelligence known as JARVIS, who at this point operated as a butler in Stark’s private residence, but would later provide the source code for the androids Ultron and Vision.

But at the same time as all this professional success, Stark grew increasingly erratic, infamous for his playboy antics and mercurial behavior in the boardroom. His only stabilizing influences were his mentor Obadiah Stane and best friend James Rhodes, who spent much of his time overseas with the Air Force.

The arrival of Pepper Potts was a significant turning point in Stark’s life. Initially hired as his personal assistant, she later became his girlfriend, partner, and the CEO of Stark Industries. Despite accusations of nepotism, Potts was seen by insiders as the only person capable of handling Stark’s lightning-fast pace. When Stark was kidnapped by the Ten Rings terrorist organization in 2008, it was Potts who took over the day-to-day running of Stark Industries while Obadiah Stane—who had in fact orchestrated the kidnapping himself—steamrollered the board of directors.

Stark’s kidnapping is now seen as a pivotal moment in the War on Terror, ending Stark’s cozy relationship with the military and prompting him to shift focus to renewable energy and defensive technology. This was also the birth of Iron Man, ushering in the age of the American superhero.

Iron Man’s exploits were instantly controversial, cementing Stark’s image as a man above the law. His superhero identity only bolstered his cult of personality, which reached its peak after the Battle of New York in 2012, when he led the defense against Earth’s first alien invasion—and personally saved the city from nuclear annihilation. As the public face of a team that literally saved the world, Stark was now untouchable. This set the scene for the next five years of increasing political influence, as Stark began to interfere directly in American foreign policy and the inner workings of the nation’s intelligence apparatus—first with S.H.I.E.L.D., then with the disastrous creation of Ultron, and later with the Sokovia Accords. In an attempt to regulate the superpowered activity, he split the Avengers team in half, turning heroes like Captain America and Hawkeye into international fugitives.

In a 2017 interview with the New York Times—one of the few he gave during his later years—Stark discussed his struggle with PTSD during this period, admitting that he was driven by an obsessive desire to protect Earth from further attacks. Despite its destructive consequences, this obsession was warranted. In 2018, he was on the front lines of the initial fight against Thanos.

In the years following the 2018 genocide, Stark retreated from public life. He and Pepper Potts—whose relationship had always been more private than Stark’s youthful flings—stepped back from Stark Industries, which redirected its mission toward providing clean energy worldwide. The couple welcomed their first and only child, Morgan Stark-Potts, in 2019.

Previously seen as a figure of derision on par with Paris Hilton or Elon Musk, Tony Stark went on to have a unique impact on the 21st century. His work with Stark Industries changed the course of America’s wars in the Middle East. His arc reactor technology may be humanity’s best hope for defeating climate change. Iron Man led him to be loved and hated in equal measure, saving lives while also interfering in high-stakes conflicts with unpredictable fallout. His true historical legacy won’t be known for decades, but for now, we can be certain that he died a hero.

Tony Stark is survived by his wife, Pepper Potts, their daughter Morgan, and the remaining Avengers, who will continue to be funded by Stark’s personal fortune.

Inscrutable yet charismatic, Natasha Romanoff managed to be one of the most recognizable Avengers while strategically avoiding the spotlight. Known for her glib on-the-spot remarks during public appearances, she refused to give in-depth interviews until 2014, when she and Steve Rogers revealed Hydra’s infiltration of S.H.I.E.L.D., her former employer.

Previously famous for being the sole female member of the Avengers—a job that invited fascination and sexist commentary in equal measure—the collapse of S.H.I.E.L.D. rebranded her as a whistleblower on par with Edward Snowden.

Born in the Soviet Union to parents unknown, most of our knowledge about Romanoff’s early life comes from classified documents, leaked by Romanoff herself in 2014. Her approximate date of birth is listed as 1984, but the specifics remain a mystery—so mysterious that many people doubt the location (Stalingrad) and even the year, theorizing that Romanoff might have been significantly older than she appeared. Even her name, Natalia Alianovna Romanoff, may be an alias created by the KJB. No records exist of Romanoff’s early years, but we know she was recruited—or kidnapped—by the KJB at age 5 or 6, to be raised by a program known as the Red Room.

Operating from the 1940s to the 1990s, the Red Room trained generations of female agents for the Soviet Union, teaching them combat skills, spycraft, and psychological manipulation. Romanoff’s Red Room file lists assassinations and espionage missions from the late ’90s to the early 2000s, when she defected from Russia’s FSB to S.H.I.E.L.D.

According to her S.H.I.E.L.D. records, Romanoff was recruited by Clint Barton (aka Hawkeye), during a mission when both were ordered to kill the other. This unlikely circumstance led to a lifelong friendship, with Romanoff and Barton partnering up under the callsign Strike Team Delta. Comfortable with serving in the shadows, Romanoff only emerged as a public figure after the Battle of New York, instantly becoming world-famous as a member of the Avengers.

Much attention has been paid to Black Widow’s superpowers or lack thereof. While the Avengers generally recruit people with superhuman powers or enhancements, Romanoff and Barton were baseline humans—albeit humans with extraordinary training. This proved to be more of an issue for Romanoff than Barton, thanks to her status as the first woman on the team.

Partly due to her glamorous appearance, Romanoff’s place in the Avengers was quickly politicized, with conservative commentators doubting her ability to be a useful member of the team. In response, this inspired Romanoff’s supporters to celebrate her as a feminist icon, pushing back against the implication that she was the token female Avenger. This conflicted role was further complicated by the S.H.I.E.L.D. leaks when she personally unveiled decades of unethical activity within U.S. agencies. Her Senate testimony was the most-watched government event since the Anita Hill hearings in 1991.

Romanoff sided with Tony Stark and the rule of law during the debate over the Sokovia Accords in 2016, pitting her against friends and allies including Clint Barton. This feud must have healed by the time of Thanos’ attack in 2018 when she fought alongside Steve Rogers and members of the Wakandan military forces. Over the next five years, she became the de facto leader of the Avengers, whose remaining members now prioritized search-and-rescue missions.

Unlike the other public-facing members of the Avengers, Tony Stark and Steve Rogers, Romanoff remains an enigma. Her Red Room training was surprisingly useful in her later life as a celebrity, helping her to separate her public persona from her private life. Often viewed as the punchline to sexist jokes on late-night talk shows (or as the ass-kicking feminist hero of a male-dominated team), people routinely overlooked her shrewd political acumen—which only served to benefit Romanoff in the long run. Her friends describe her as witty, loyal, and a master strategist in the field. Her enemies are dead.

Details of Romanoff’s final days were kept private at the request of Clint Barton, who informed the press that she died in the line of duty. Mourners are invited to send donations to the Orphans and Survivors of Hydra Fund.