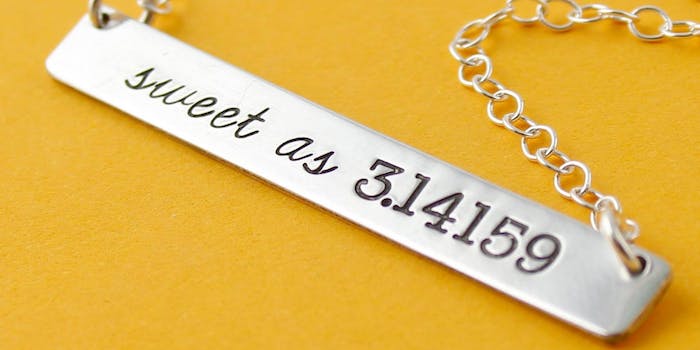 14 accessories to celebrate your love of pi

Let your irrational side shine just in time for Pi Day!

To some people pi might just represent the circumference of a circle divided by the circle’s diameter, but to others it’s so much more. People love pi! Maybe because people also love pie.

But there’s something about the mathematical constant that has even those who might not consider themselves math geeks excited, especially every year on Pi Day.

Pi Day is observed on March 14 to correspond to pi’s first three digits—3.14. To commemorate the holiday, people go all out with pi-inspired items from fashion to food. There are many other celebrated parts of mathematics such as the Fibonacci sequence, but none seem to be as loved as pi.

Luckily that means there are numerous ways for you to share your love of pi with the world. Here are 14 items we found that are perfect for pi lovers to enjoy on Pi Day and beyond!

Boutique Academia’s pi pendant necklace features the pi symbol on one disc and pi to 35 decimals on the other. Or you can have a little fun with Spiffing Jewelry’s twist on the phrase “sweet as pie” with their “sweet as pi” necklace. Both of these affordable pieces will make it clear the irrational number is close to your heart!

Math can be very beautiful, so why not display pi on your wall with a piece of art? Bioinformatics scientist Martin Krzywinski stunningly visualizes pi in an art series he began in 2013. Each year’s piece colorfully represents pi in a different way. In 2015 for example, Krzywinski encoded pi in his work through treemapping and created a number of different posters through the method. By hanging up one of these posters you’ll be able to enjoy a great piece of art that doubles as a conversation piece.

Since pi and pie go together so well, combine the two with these clever plates. Eat pie on a plate featuring a mathematical equation—or use it to have some fun with your guests! See if they can put together the “i eight sum pi” message on their own. 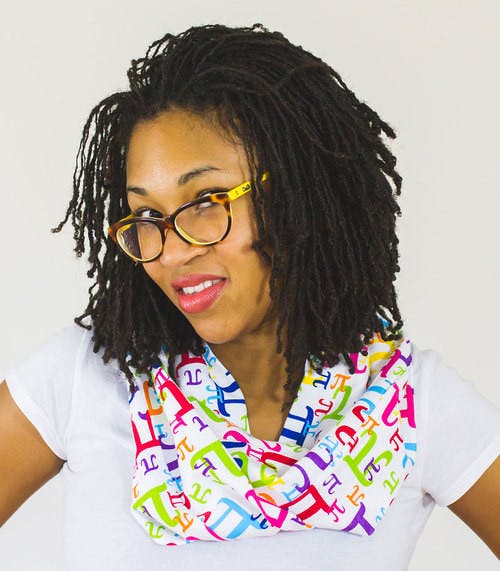 It’s only rational to have a scarf that can be fashionable and useful in any season, but that doesn’t mean it can’t have a dash of irrationality about it! This infinity scarf from Princess Awesome displays the pi symbol in varying sizes and colors. It’s a fun statement piece that would work equally well keeping out the chill during a walk as it would acting as a colorful accessory while you’re on the job. 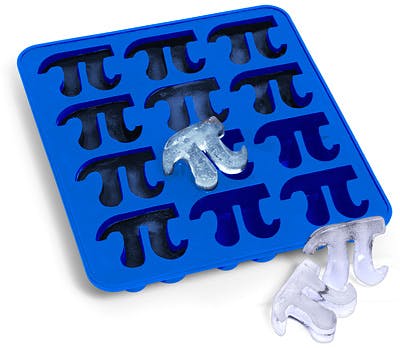 Want a drink that’s constant, not variable? Then add a pi symbol ice cube to the mix by using ThinkGeek‘s silicone tray. Perfect for your Pi Day party or any night you want to feel irrational, ThinkGeek even helpfully includes the recipe for a Pi-Tini on its website so you can really keep the pi theme going. The tray can be used to create things other than pi-shaped ice too. Customers have used it to make pi chocolate, soap, and more!

You won’t be able to fit an infinite number of items in this purse, but you will be able to use it to display your appreciation of pi. Etsy shop DisturbinglyAdorable sells this bag which features the digits of pi in different sized circles on the canvas. It’s subtle enough that it can just look like a cute purse from a distance, but anyone who looks closer will realize you’re expressing your inner math geek!

If you really want to go subtle, you might want to consider this cologne named Pi. The Givenchy fragrance proudly displays the pi symbol on its packaging and according to its description on Sephora’s website, “is a celebration of what makes a man seductive—his intelligence, courage, and contributions. Pi is more than a name, it’s a symbol.” Unfortunately the cologne does not apparently smell like pie to achieve this vision. Customer reviews say it’s actually dark, earthy, and even spicy. If cologne isn’t your thing, there are other Givenchy Pi products too. It’s the perfect choice for anyone who doesn’t want to be too obvious about their pi devotion, but can’t wait to launch into a discussion of the mathematical constant once someone asks “what are you wearing?” 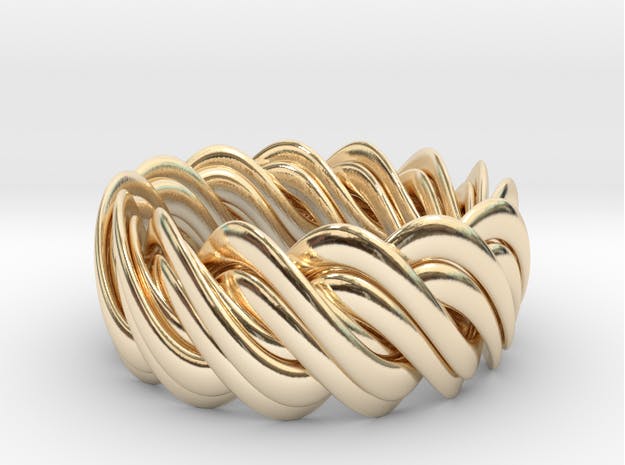 Keep pi wrapped around your finger with this 3D-printed ring. At first glance you won’t know this has anything to do with the irrational number, but pi is actually hidden in the ring’s creation. The ring is a (3,14) torus knot that is made from another (3,14) torus knot in honor of pi’s first three digits. 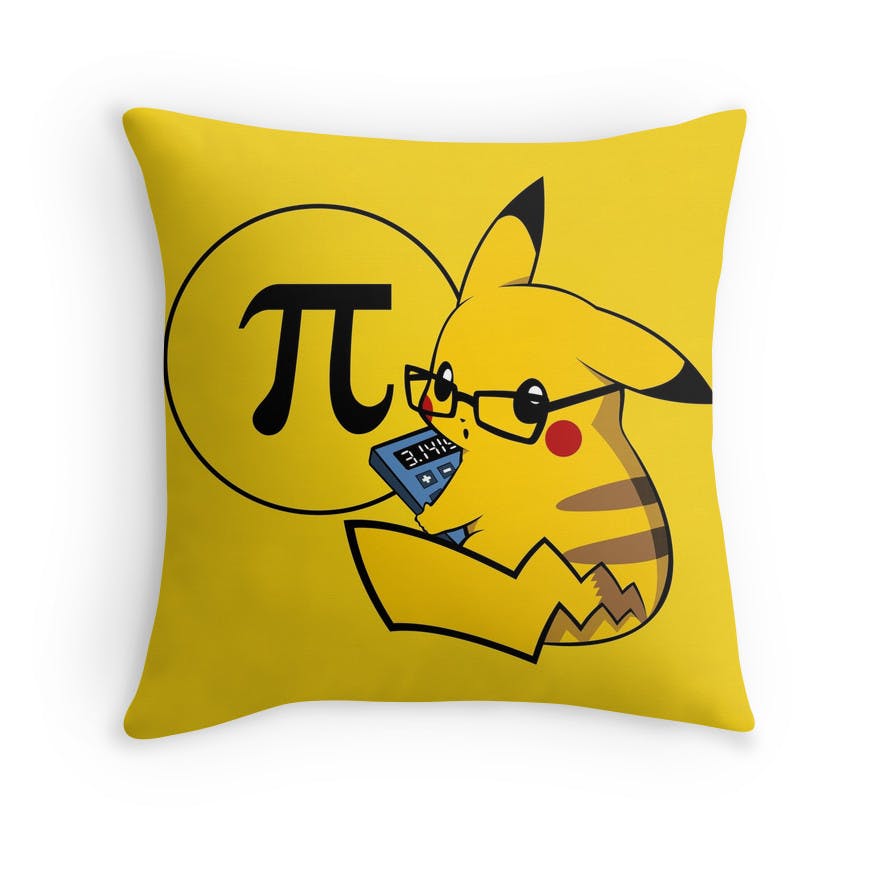 Add the ultimate geeky touch to your home with a throw pillow combining math and Pokémon! Complete with pi symbol and an adorable Pikachu holding a calculator displaying the digits of pi, how can you resist such a fun, bright piece of home decor? Not only is it super nerdy, but it will let you have fun with the play on words whenever someone mentions the pillow (“Pi-kachu,” get it?) 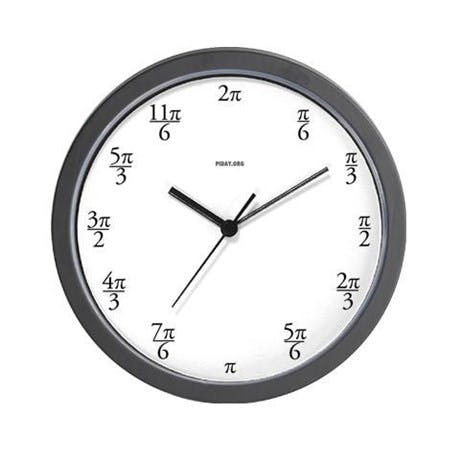 Don’t be late for your important Pi Day date with this clock! It tells time in terms of pi and radians, an angular unit of measure. The clock might confuse some of your visitors, but will be a big hit with your fellow math geeks! 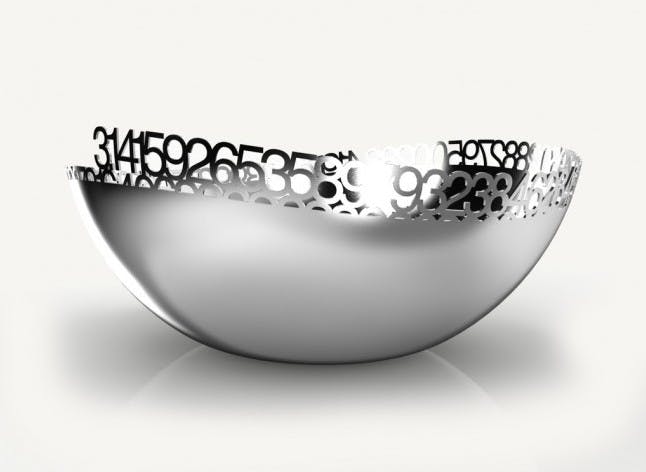 For a more high-end way to flaunt your mathematical side, add this “Digits of Pi” salad bowl to your kitchen. Designed by Kirk Mosna, the bowl is pricey at $144, but it’s certainly a unique expression of pi. This is only one of the items in Mosna’s pi-inspired SteelForme collection too, so if you’d rather spend your money on a designer pi napkin holder instead you can!

“The creation of the Pi line objectifies my fascination with numbers and the beautiful logic of mathematics,” Mosna said of the collection. “Some have jokingly suggested I could have simplified the design to simply 22/7, but I think we all know that would only give us an approximation of infinite perfection.” 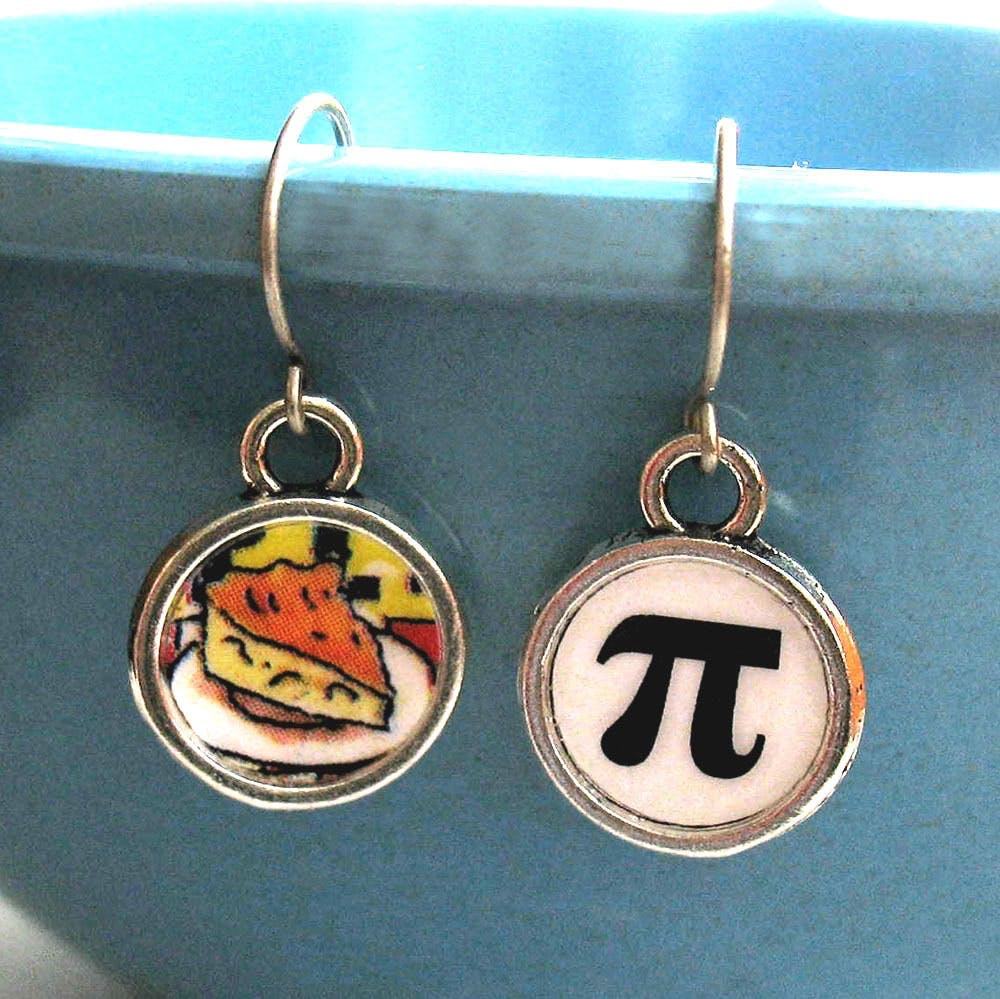 For those math enthusiasts who want to include not only pi in their wardrobe but pie as well, A Likely Story’s earrings might be just what you need. Displaying the pi symbol and a slice of delicious-looking pie, these earrings will add the right touch of math and dessert to your fashion.

Speaking of pie, how do you plan to cut a delicious slice? Clearly you need to use this product both math and Star Wars geeks will enjoy: The pi saber! As soon as your friends see it, they’ll know the pi is strong with you. 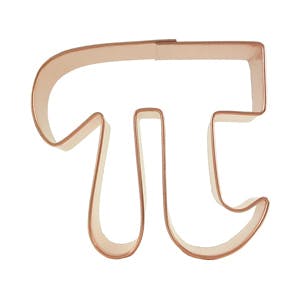 It’s always fun celebrate with dessert, so spread your love of pi by shaping anything you make into its symbol with these cookie cutters available in a variety of sizes. You can use them for cookies and other tasty treats baked for any day, not just Pi Day!