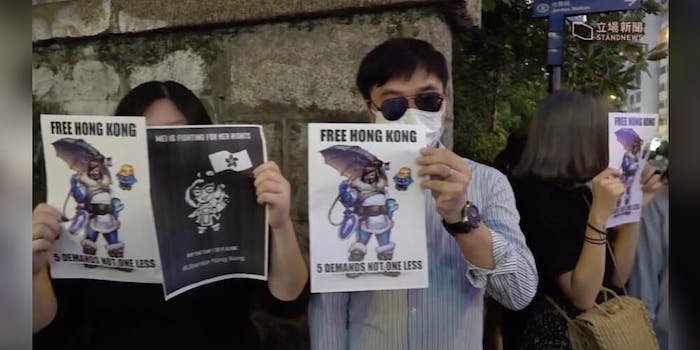 'It's beyond politics, it's a human rights issue. Don't you get that?'

Blizzard backlash has become a problem for the moderators of Reddit’s Nintendo Switch community.

The gaming developer which created Overwatch is still reeling from the controversy over its recent decision to punish a gaming pro for voicing his pro-Hong Kong-liberation views live. After the company decided to suspend Chung “blitzchung” Ng Wai, confiscate his winnings, and fire the interviewers he’d been speaking with, the internet swarmed to his defense.

In just over a week, the news has spread to every corner of the internet. And after a planned Blizzard event was abruptly canceled, fans discussed implications, asked questions, and vented on subreddit, r/NintendoSwitch. In response, they were talked-down to by moderators and had a new rule—Rule 11—unceremoniously shoved down their throats. As dissent about whether political chatter is welcome on gaming forums fumes, let’s unpack the drama this week.

During the Hearthstone Granmaster‘s season finale this month, pro player blitzchung appeared on the official Taiwanese Hearthstone stream. Just before the stream was abruptly cut, blitchung—in a gas mask and white T-shirt—said “liberate Hong Kong, revolution of our age.” Blizzard, which China’s Tencent owns 5% of, quickly worked to separate itself from the player and the statement.

Blizzard’s move was attacked as cowardly, considering the company’s vested financial interest in the Chinese video game market. Players quickly flocked to the issue, swearing to boycott Blizzard and blasting the company for its decision. In response to the criticism, Blizzard quickly backpedaled. Over the weekend, the company announced that blitzchung would, in fact, receive his winnings and his suspension was reduced to six months. Blitzchung reportedly expressed his gratitude for the lessened punishment on Twitter and asked for a similarly softened punishment for the interviewers. Thus far, Blizzard has not reinstated their positions.

Still, Blizzard is being squarely criticized on social media.

So many American companies, Blizzard, NBA, Hollywood, and countless more and censoring free speech in fear of angering China and losing out on Chinese money. It’s ironic when Blizzard’s slogan is “Every Voice Matters” and their games features heros fighting for justice. pic.twitter.com/rAkwXaMDxZ

Here's the thing, I get not discussing politics at a sports game and all, @NBA and @Blizzard_Ent don't need to allow players to use the exposure to vote for a president. But supporting freedom for Hong Kong (and all of China let's be fair) is hardly "political"

I sure hope Blizzard's lovely decision to side with China to please their oppressive government bites them in the ass, and especially their wallets. Liberate Hong Kong, revolution of our times. #StandWithHongKong #BoycottBlizzard pic.twitter.com/AWvecoQntj

After more than a week of intense backlash, Blizzard decided Monday to cancel a planned Overwatch launch event at NintendoNYC. Fans were furious and saw it as a way to avoid difficult questions. The announcement received swift condemnation. “Keep cancelling events until these corporate suits at Blizzard realize China can’t turn the US gaming industry into their own private company town,” one commenter said.

Please be aware that the previously announced Overwatch launch event scheduled for Wednesday, 10/16 at NintendoNYC has been cancelled by Blizzard. We apologize for any inconvenience this may cause.

Sorry to burst your bubble but it was probably the corporate suits at blizzard that cancelled this wanting to avoid protests and the like. Almost no chance Nintendo did the cancelling.

After the news was shared on the NintendoSwitch subreddit, things really started to spiral. Discussion about Blizzard, Hong Kong, and censorship quickly swept through the forum. Conversations about Overwatch and other Blizzard content became inextricably linked with politics and amid the ongoing Hong Kong protests. In response to these conversations about gaming injected with political content, Reddit moderators introduced a new rule.

After the post about Blizzard’s scrapped event was abruptly shut down, moderators responded with a new rule. Rule 11, as they called it, outlined several new policies for those on the subreddit. Among the rules was a ban on politics, which users were quick to address in the comments.

Moderators noted that Rule 11 included “unwritten policies that we incorrectly assumed were widely known.” Users took issue with the phrasing, finding it condescending and uninformative. “Honestly, what are you thinking? What is the thought process here,” one commenter asked. “You’ve enforced a rule that didn’t exist, and when called out on it, you just make it an official rule without discussion and continue silencing people. It’s severely inconsistent at best, and extremely insidious at worst. Please reconsider your approach.”

They were far from the only one to express the sentiment. “So it literally WAS NOT a rule until you guys retroactively added it to fit this fiasco you put yourselves in,” another commenter said. “Cowards.”

After waves of criticism came in response to the unannounced rule, Reddit moderators backpedaled. They released a statement addressing the new rule, as well as the backlash it received. “We acknowledge that we were poor in how we handled this situation, both in the lead up, the execution of the rule change, and what immediately followed,” the mods wrote. “We apologize for the handling of this situation.”

In response to the backlash, the mods made several changes to Rule 11. They rescinded the “no politics” portion of the rule, arguably the most reviled part. They also unlocked the original thread, which had been locked after conversations that the mods didn’t approve of cropped up. The conversations, according to moderators, “escalated with the same harassment and name calling that has been occurring on several of these threads.” After acknowledging that the rule should never have been passed without feedback from the community, they also promised to never blindside the subreddit with a similar rule again.

No moderators will be removed in response to the backlash, despite community requests. The comment section of the moderators’ statement is littered with demands for one particular mod, MegaMagnezone, to be removed.

The community appears to take issue with the reasoning behind removing the original thread, and the implementation of an unannounced rule, as well as the moderators’ response. To condemn political discussions on a post with an inarguably political tilt—Blizzard canceled the event amid the Hong Kong backlash—was a tipping point for the gaming community. The same thing goes for the new rule. Redditors felt blindsided and insulted by the rule’s sudden implementation, and the response by mods. It appears that Reddit, like Blizzard, is hoping to shove the whole issue under the rug—but gamers are pushing back.