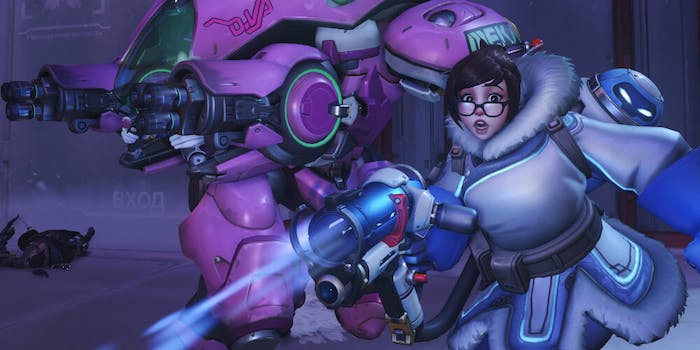 It originated on the r/HongKong subreddit.

Gamers are calling for a boycott of Blizzard after the company suspended Chung “Blitzchung” Ng Wai, a Hearthstone pro player who called for the liberation of Hong Kong during the Asia-Pacific Grandmasters’ broadcast. As part of the suspension, Blizzard stripped Blitzchung of his tournament prize money and banned him from eSports for an entire year. Many fans are outraged by Blizzard’s actions and are posting art and edited images of Overwatch’s Mei supporting the Hong Kong protests.

The Hong Kong protests have been ongoing for several months now. Protests began with a proposed bill that would have allowed fugitives to be extradited to mainland China. Even though the bill is now dead, protesters continue to fight for democracy.

“Liberate Hong Kong. Revolution of our age!” Blitzchung, who is from Hong Kong, said near the end of the stream. The interviewers proceeded to duck behind their desks during the statement, and the broadcast quickly cut to commercial. While Blizzard cited that Blitzchung violated a rule stating that an action that “damages Blizzard image” was justified cause for suspension, it’s clear from these actions that it’s aware of possible damages from the Chinese market in particular.

The online act of solidarity originated on the r/HongKong subreddit with a post encouraging fans to turn Mei, whose character comes from Xi’an, China, into a symbol of democracy.

“It would be such a shame if Mei from Overwatch became a pro-democracy symbol and got Blizzard’s games banned in China,” the post reads.

Another user was inspired by the post and shared their own iteration of the meme on the subreddit. Fans from Reddit and Twitter alike are encouraging others to share their own memes of Mei in an act of solidarity with Hong Kong as well as a protest against Blizzard’s actions.

Blizzard banned pro Hearthstone winner for supporting free Hong Kong and took away his prize money. It would be SUCH A SHAME if Mei became a symbol of Hong Kong democracy and got #Overwatch banned in China like Pooh did