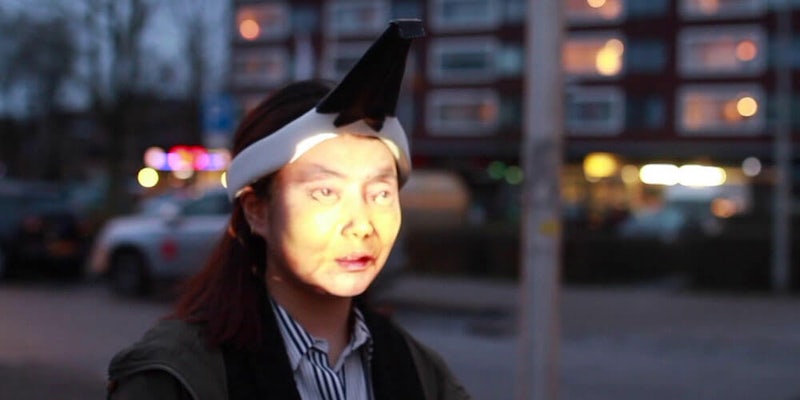 Is this wearable face projector being used by Hong Kong protesters?

Video of a Black Mirror-esque wearable face projector allegedly capable of tricking facial recognition systems is making the rounds on social media, alongside claims that it’s being utilized by protesters in Hong Kong.

The video spread and garnered millions of views on Twitter, Reddit, and Facebook over the weekend after authorities in Hong Kong announced a ban on face masks.

But the video is not from the protests. And there is no evidence that the device is being used in Hong Kong either. So where did the video come from?

The video first appeared on YouTube in April of 2017 and was posted by art and product designer Jing-Cai Lu.

The device was created as part of a project, known as “Anonymous,” put on by the HKU University of the Arts Utrecht in the Netherlands.

The wearable face projector, as well as five other privacy-related products, were showcased at a 2017 event in Milan, Italy.

Discussing the item on her website, Lu describes a future where facial recognition cameras are used to serve ads to people walking down the street. With a wearable face projector, however, individuals can alter their look to keep themselves from being tracked.

Lu appears to be aware that her device is being tied to the Hong Kong protests. In an update to the description on her YouTube video, Lu states that her project “has NOTHING to do with political purposes!”

Questions have also been raised as to whether the device actually works. Lu describes the face projector as a “concept” on her site. Users on social media have also noted that the video seems to suggest that the light source is coming not from the device but from out of frame.

The false faces being projected onto the individual can be seen shifting left and right, despite the wearer’s head being still, indicating that the light could be coming from in front of them.

Given that the video is also being filmed at night, it remains to be seen whether such an item would be usable during the daytime.

While the wearable face projector may not be in use by Hong Kong’s protesters, concerns over facial recognition are very real.