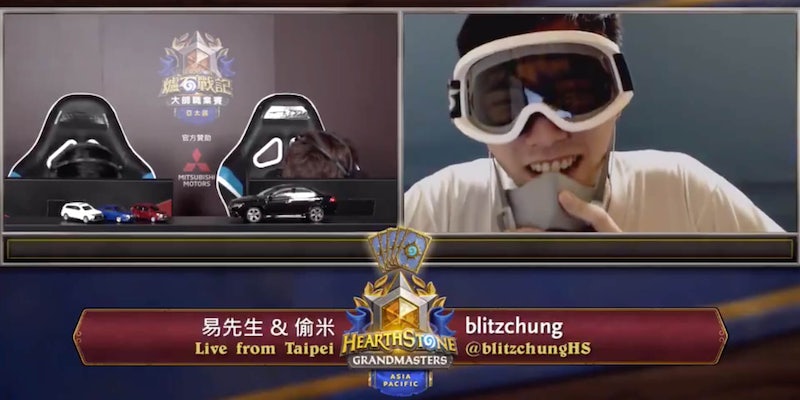 Blizzard even went after the interviewers.

Blizzard acted quickly in response to a post-match interview blitzchung gave, removing him from Grandmasters and suspending him for a year. The video game developer also cut ties with the streamers involved in the blitzchung interview. In response to his punishment, blitzchung doubled down on his statement, saying he thinks it’s his “duty to say something about the issue.”

The interview in question occurred during the last weekend of Hearthstone Grandmasters’ regular season. Blitzchung donned a gasmask before appearing on the official Taiwanese Hearthstone stream, where he made immediate waves with his statement. In the moments before the stream was cut off, blitzchung shouted “Liberate Hong Kong, revolution of our age.” The interviewers, apparently unprepared for blitzchung’s statement,  momentarily ducked beneath the desk following his words. Moments later, the stream ended.

Following his proclamation, blitzchung was promptly removed from Hearthstone Grandmasters, and blocked from competing for the next 12 months. Blitzchung’s earnings from Grandmasters season 2 have also been rescinded, and they cut ties with the casters involved in the interview. This is despite their apparent attempt to separate themselves from blitzchung’s statement.

Immediately following the interview, Blizzard removed the video and released a statement on the matter. In it, the company explains that blitzchung supposedly violated the 2019 Grandmasters rules. “Engaging in any act that, in Blizzard’s sole discretion, brings you into public disrepute, offends a portion or group of the public, or otherwise damages Blizzard’s image will result in removal from Grandmasters and reduction of the player’s prize total to $0 USD, in addition to other remedies,” Blizzard’s statement reads.

Breaking: Effective immediately, Blizzard has removed Hong Kong Hearthstone player blitzchung from Hearthstone Grand Masters, rescinded all his prize money, and have suspended him from pro play for one year for his recent interview.

Blizzard has also disabled comments on the news which are normally open, and from scrolling back through hundreds of posts this is the only time they've done that

Following the incident, blitzchung doubled down on his stance. “As you know there are serious protests in my country now,” blitzchung told Inven Global. “My call on stream was just another form of participation of the protest that I wish to grab more attention. I put so much effort in that social movement in the past few months, that I sometimes couldn’t focus on preparing my Grandmaster match. I know what my action on stream means. It could cause me lot of trouble, even my personal safety in real life. But I think it’s my duty to say something about the issue.”

In recent months, Hong Kong has remained a hot-button issue in the news. The region has been in the spotlight thanks to massive protests in response to China’s increasing control over the country.

Blitzchung did not wish to comment further to the Daily Dot at this time. Blizzard has not yet responded to a request for comment.