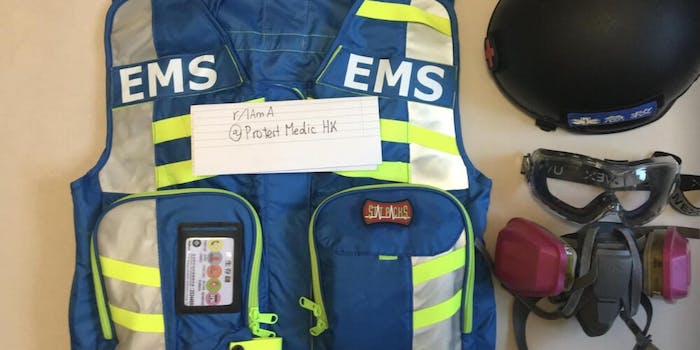 ‘We're all worried about how we're going to be treated when China fully controls us.’

An anonymous 17-year-old medic volunteering on the front lines of the Hong Kong protests conducted a Q&A on Reddit this week, sharing his first-hand experience from the movement.

Protests have been going on throughout Hong Kong since March, and although the extradition bill that initially sparked the demonstrations has been withdrawn, protesters have other demands, and they’re not backing down. As the Hong Kong protests have continued, clashes between protesters and police have gotten more extreme. On Oct. 1, a high schooler was shot at close range by police and charged with assaulting police.

According to the teen medic, many of the people participating in the protests are teens and young adults worried about their futures. “Many of the protesters will be middle-aged when 2047 comes around, we’re all worried about how we’re going to be treated when China fully controls us,” he wrote. “We see what they’re doing to the Tibetans and Uyghurs and we fear that it might happen to us if we don’t resist.”

The 17-year-old provided a picture of his gear, including his first aid certification card, as proof of his role as a volunteer medic in the Hong Kong protests. He explained that his mom made him take a first aid class when he was 13, and from there, he became interested in emergency medicine. By 16-years-old, he was regularly volunteering with the ambulance service, and he’s saving up to get his next certification.

When asked what Western media hasn’t shown, the young medic said that protests aren’t actually as widespread as people outside of Hong Kong seem to think. “Even in the most severe protests, the clashes usually occur in a limited area, and is then moved depending on where the protesters decide to go or where the police is coming from,” he explained. “It’s not really the city halting, everything destroying, mass disruptions everywhere as a lot of the media is making it out to be.”

The most common question people asked was how they could help, and to that the teen medic had one request: donate to the people on the ground—the protesters, the medics, and the press putting their lives on the line.