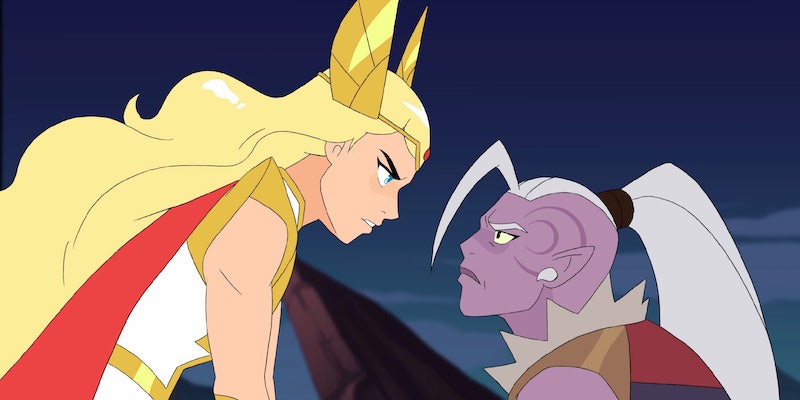 Netflix‘s She-Ra and the Princesses of Power remake spent its first two seasons slowly peeling back layers of its characters and expanding the mythology of Eternia while introducing new fans to She-Ra’s world with clever nods to the original series. In its third season, it all brilliantly comes to a head in exciting and devastating ways, tying together what came before and delivering well-earned character moments.

RELEASE DATE: 8/2/2019
DIRECTOR: Noelle Stevenson
STREAMING: Netflix
‘She-Ra’ expands its horizons while maintaining a keen sense of the story it wants to tell and who lives in its world.

At just six episodes, She-Ra season 3 is its shortest yet. It’s engrossing enough that you could easily watch the entire thing in one sitting, yet the story doesn’t feel rushed, and it doesn’t waste the time it has. The new season stands on its own, but if you happened to fall behind on season 2—which premiered the same weekend Avengers: Endgame hit theaters and Game of Thrones aired its big battle episode—catching up can make it even more rewarding. That’s because season 3 begins right where season 2 left off: with Shadow Weaver (Lorraine Toussaint) appearing before a sleeping Adora (Aimee Carrero) in Bright Moon.

Adora and Catra’s journeys take them both to the Crimson Waste—the dangerous desert in Etheria that evokes Star Wars’ Mos Eisley cantina and the aesthetic of the Mad Max films—forcing them to adapt quickly. Adora soon encounters Huntara (an underutilized Geena Davis), a confident warrior leader who might be able to help her. Catra, on the other hand, finds her experience with the Crimson Waste is much different than what she’s been told about it. The Crimson Waste isn’t just a desolate wasteland where heroes and villains go to die; it’s a striking setting rife with personality in which we could have easily spent another episode or two if the season were longer.

Meanwhile, the war between the Rebellion and the Horde rages on. Though it largely takes place in the background, the motivations for choosing either side are still on the surface. Even at their most evil, the people of the Horde are rarely one-dimensional.

Adora is determined to figure out where she came from. She also wants to figure out the message Mara—the last She-Ra—might have left for her with her friends Bow (Marcus Scribner) and Glimmer (Karen Fukuhara), the latter of whom still butts heads with her mother about how to lead the Rebellion. Catra (A.J. Michalka), Adora’s friend-turned-enemy, is still trying to prove herself to Hordak (Keston John), even when his newest mission for her is little more than a death sentence.

Entrapta (Christine Woods) is more than happy to follow the science, even striking something of a friendship with Hordak. But her tinkering with the Horde never feels cruel; it’s just who she is. Scorpia (Lauren Ash) may be loyal to the Horde, but she’s just as fiercely loyal to Catra herself.

As in previous seasons, the defining conflict of She-Ra season 3 is the oft-contentious rivalry between Adora and Catra, which is fueled by years of friendship, jealousy, contempt, and mental abuse by their guardian, Shadow Weaver. The writing is sharper than ever, establishing exactly where Adora and Catra are coming from and what informs their decisions. But because the show has already spent so much time peeling back the layers of their thorny relationship, it’s easy to empathize with both characters.

She-Ra expands its mythology even further in season 3, weaving new information, backstories, and game-changing reveals into previous threads. Mythology is only as effective as our investment in the characters and the story, and She-Ra nurtures those elements enough that its mythology enriches the show.

As She-Ra and the Princesses of Power expands its horizons, it maintains a keen sense of the story it wants to tell and exactly who lives in its world. It blends heart-rending moments and humor effortlessly, always preserving a glimmer of hope. In those moments, She-Ra stands tall.