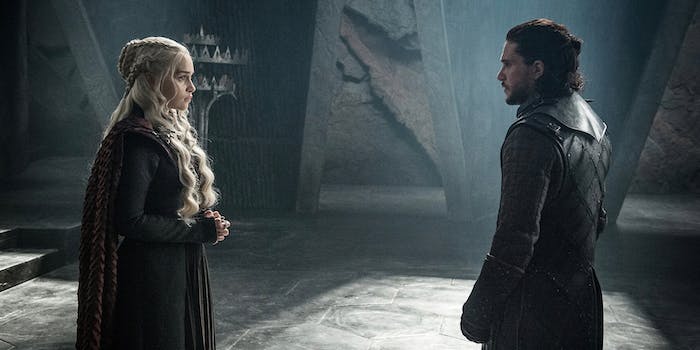 How the Targaryens’ history of incest could shape ‘Game of Thrones’

A family tradition that predates their Westerosi invasion.

The most recent Game of Thrones episode finally brought two of the show’s biggest (and most important) characters together for the first time. It won’t be their last interaction, leaving some fans (who weren’t doing so already) to wonder if Daenerys Targaryen and Jon Snow would follow in the taboo footsteps of their ancestors.

By episode’s end, the Mother of Dragons and the King in the North are able to come to a sort of understanding. Neither of them have forgotten their conversations with one another, but Dany allows Jon Snow to mine the dragonglass located underneath Dragonstone if only because it’ll keep him busy while she takes the Seven Kingdoms. As he walks away, she glances back at him.

Although Jon and Dany have a lot in common in regard to their circumstances and the non-magical elements of their rise to power, they’re guarded toward each other. Dany hasn’t told Jon that it was Melisandre’s idea to summon him, and Jon’s still staying mum on his resurrection. Given their connection, their political positions as rulers of their respective people, and the fact that Dany and Jon are single and fairly close in age, fans are already rooting for these two to pull through. Not just as allies, but something much more.

While Daenerys and Jon have yet to meet in the books, the idea of them getting together romantically has been on the table for years. They’re two sides of the Azor Ahai coin and their journeys have paralleled one another. Their union would be an embodiment of ice (House Stark) and fire (House Targaryen), even though Jon’s parentage already has him fulfilling that on his own. But there are some concerns among fans, one of those being the fact their relationship would be incest.

As the season 6 finale revealed, Jon Snow is the son of Rhaegar Targaryen and Lyanna Stark. Rhaegar is Dany’s oldest brother (and the namesake of her dragon Rhaegal), which would make Dany Jon’s aunt.

Of course, neither of them know this right now. Bran Stark, the one person who does know the truth behind Jon’s parents, arrived at Winterfell after Jon left for Dragonstone. So any acts of incest would occur without them realizing they’re related.

If Dany and Jon were to get together before Jon learns of his parentage, we can only imagine how Jon would react to it. Jon, like most in Westeros, probably learned that it was one of the most grievous sins he could commit. Dany, on the other hand, grew up learning it was a normal thing in her family. While Cersei and Jaime Lannister once killed to hide their incestuous relationship with one another, Cersei is getting bolder. After all, she’s far from the first ruler of Westeros to take part in it.

The Valyrian tradition as old as time

It’s a tradition that extends all the way back to Old Valyria, according to The World of Ice and Fire, George R.R. Martin’s expansive (albeit incomplete) history of Westeros, Essos, and the worlds beyond. The ruling families of Valyria—“particularly those who bred and rode dragons,” Archmaester Gyldayn noted in his writing—would regularly practice incest because it was a way for them to keep their blood pure.

“Wedding brother to sister was thought to be ideal,” he wrote in TWOIAF. “Failing that, a girl might wed an uncle, a cousin, or a nephew; a boy, a cousin, aunt, or niece.”

The first documented instance of incest came from Gaemon and Daenys Targaryen, siblings who married and moved to Dragonstone after Daenys had a prophetic dream about the Doom. Their children, Aegon and Elaena, married each other. Polygamous marriages weren’t as common—though it did sometimes occur. The most famous instance came via Aegon the Conqueror, who took the Seven Kingdoms (except for Dorne) with his two sister-wives Visenya and Rhaenys and their three dragons.

Targaryens also married outside their own family. They married into House Martell in Dorne, which finally linked the Seven Kingdoms together in full. They also have a connection to House Baratheon through its founder, a rumored bastard brother of Aegon the Conqueror; and Robert, Stannis, and Renly Baratheon’s Targaryen grandmother.

Some rulers, such as Aegon V Targaryen (also known to some fans as Egg), married members of lesser houses or into other Valyrian families. But many of them married their siblings, their aunts and uncles, nieces and nephews, and their cousins. That mentality extended all the way to Daenerys herself in A Game of Thrones, who grew up believing that she would marry Viserys per tradition.

“She had always assumed that she would wed Viserys when she came of age. For centuries the Targaryens had married brother to sister, since Aegon the Conqueror had taken his sisters to bride. The line must be kept pure, Viserys had told her a thousand times; theirs was the kingsblood, the golden blood of old Valyria, the blood of the dragon.”

The Targaryens vs the Faith Militant

Though incest was part of House Targaryen’s calling card (with some exceptions) and the people of the Seven Kingdoms eventually bent the knee to their Targaryen conquerors, not everyone was happy about that particular habit of their new rulers.

Despite the Targaryen practice, incest was strictly forbidden by pretty much every major religion in Westeros and viewed as terrible a sin as kinslaying and bastardy, the latter which was extremely common. Particularly, it was viewed negatively by the Faith of the Seven, the largest religion in Westeros. Though the High Septon blessed Aegon the Conqueror when he officially became king, the peace between crown and Faith wouldn’t last.

“Incest was denounced as vile sin, whether between father and daughter, mother and son, or brother and sister, and the fruits of such unions were considered abominations in the sight of gods and men,” Archmaester Gyldayn wrote in TWOIAF. “With hindsight, it can be seen that conflict between the Faith and House Targaryen was inevitable.”

The Valyrian ways of old first became an issue after Aegon and Visenya’s son Maegor took a second wife after his first marriage produced no children. The alliance between Faith and crown became shaky, but two years later King Aenys I Targaryen (the son of Aegon and Rhaenys) married two of his children to one another. That launched an uprising by the Faith Militant that lasted seven years and spanned the reigns of three separate Targaryen kings. The Faith Militant were disbanded until Cersei Lannister allowed the High Sparrow to bring them back hundreds of years later.

“The line of succession, the proper progression, the lawful ascension”

There’s a scene in the Braavosi mummers’ version of events in Westeros that pits Ned Stark and Cersei in a back-and-forth. Though the mummers portray Ned as a power-hungry fool, Cersei (played by Lady Crane) highlights some important factors about the passing of the Iron Throne from one king to another.

She was talking about her son Joffrey Baratheon’s claim to the Iron Throne. (The real Ned didn’t believe Joffrey’s claim because he discovered Joffrey was Jaime Lannister’s bastard, not Robert’s trueborn son. Even though the Targaryen line remained more or less pure over the centuries, the family’s focus on it caused way more trouble than it was probably worth—which led to thousands of deaths, many dead Targaryens, and the eventual extinction of dragons in Westeros.

The Dance of the Dragons was fought between Aegon II Targaryen and his older half-sister Rhaenyra Targaryen over which one of them would ascend to the throne after the death of their father, Viserys I Targaryen. In the end, neither of them survived the war and the throne went to Rhaenyra’s son Aegon III.

The Blackfyre Rebellion was also an issue of succession. Just before his death, Aegon IV Targaryen legitimized all of his bastard children. One of them, Daemon Blackfyre, eventually rose against his half-brother Daeron II Targaryen, which further drove the family into war and forced the rest of Westeros to take sides. The trueborn Targaryens won, but various Blackfyres kept emerging in attempts to take the throne they believed belonged to them.

Targaryen blood was vital even in Robert’s Rebellion. Though Robert overthrew Mad King Aerys and killed Rhaegar himself after Rhaegar took Lyanna Stark away, Robert still relied on his own Targaryen ancestry to cement his claim to the Iron Throne.

What would happen if Jon and Dany got together?

One primary question people often have of Dany, despite all of her accomplishments, is if she inherited her father’s madness. While Viserys likely exhibited symptoms of it, her father was the most famous Targaryen to have gone mad: he pledged to burn everyone with wildfire before Jaime killed him. This had been chalked up to centuries of inbreeding by the Targaryens.

“Your father was not the first,” Ser Barristan Selmy told Dany in A Dance With Dragons. “King Jaehaerys once told me that madness and greatness are two sides of the same coin. Every time a new Targaryen is born, he said, the gods toss the coin in the air and the world holds its breath to see how it will land.”

If Dany and Jon were to get together and produce a child, there’s certainly a chance the child would susceptible, with Jon’s Stark mother being the only non-Targaryen in the lineage. Jon previously pledged he didn’t want to make more bastard children after his own upbringing, but he could feel differently now that he’s King in the North. And depending on how exactly his parents came together, he might also feel differently if he finds he’s a legitimate Targaryen.

But until we reach the end, it’s hard to tell if Westeros (and fans of the show) might let the potential incest slide if Dany and Jon end up saving everyone from the Night King. If they both survive this war, it’s the least everyone can do.