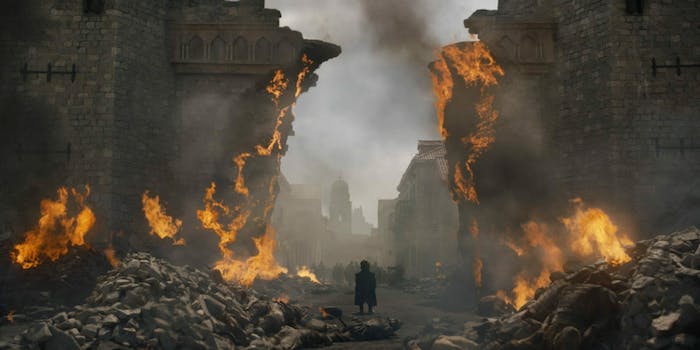 These ‘Game of Thrones’ houses are gone forever

The last few episodes of Game of Thrones saw at least one major house wiped out completely, and several others put at risk.

As the epic series reaches its finale, fans are looking for closure for characters they’ve fallen in love with over eight seasons. While we will hopefully see some favorites survive to carry on their family names, more than a few houses will never be heard from again.

With all the characters in HBO’s beloved series, it can be hard to track how each person is connected to larger Westerosi politics. As some characters die, they take with them a house and name that endured for centuries. In the last few seasons alone, a number of significant houses went dark for good. One went extinct in season 1 but was resuscitated a full seven seasons later. Here are the wiped-out hoses from Game of Thrones.

These major houses all saw their last trueborn member die at some point in Game of Thrones’ eight-season run.

House Bolton went extinct at the end of season 6. When Sansa Stark loosed Ramsay Bolton’s dogs on their former master, they munched away at the last person to carry the Bolton name. Roose Bolton found his death at the hands of his formerly bastard son Ramsay, who also took the lives of Wanda Bolton and their unnamed, trueborn son.

The status of Dorne was thrown into turmoil in season 6 when Ellaria Sand and three of her daughters assassinated Prince Doran Martell and his son Trystane. Following Oberon Martell’s death at the hands of the Mountain, they were the only legitimate Martells left. This left the line extinct. Ellaria’s actions threw Dorne into political turmoil, though a new prince has reportedly surfaced and pledged himself to Daenerys.

Somehow, it was the oldest member of House Tyrell who hung on the longest. Cersei Lannister destroyed all hope for House Tyrell’s future when she torched Margaery Tyrell at the Great Sept of Baelor, along with her brother Loras and their father Mace. After the flames cleared, only the Queen of Thornes remained. Though she joined forces with Daenerys at the end of season 6, Olenna too found her death by Lannister hands midway through season 7.

The ruling house of Bear Island didn’t go down without a fight. Continuously loyal to the Starks, House Mormont was one of the northern houses to refuse Stannis Baratheon’s claim to the throne. Before they went down, the last remaining members of House Mormont fought for humanity against the Night King’s army. Ser Jorah Mormont, eternally loyal to his queen, died saving Daenerys Targaryen from the army of the dead in season 8. Lady Lyanna Mormont died in the same battle, taking a giant wight with her.

There are too many houses in Game of Thrones to count. OK, that’s not entirely true—there are right around a hundred of them—but there are way too many to list. Some of these houses are actually important in Westerosi politics but have not taken as major a part in the series. Still, each one of these now-extinct houses was important to the events in Game of Thrones at some point in its eight-season run.

Littlefinger was the only member of this short-lived house, but we love bringing up that he’s dead. The conniving little rodent that was Petyr Baelish died in the season 7 finale when Sansa sentenced him to death. Arya Stark carried out the sentence in a moment that elicited literal cheers from fans. We watched as he carried his hard-won house name with him into death.

Even after their betrayal of the Starks, House Karstark held out for a remarkably long time. The Karstarks joined with House Bolton after Robb Stark beheaded their lord for treason. They bounced between loyalties for several seasons. House Karstark fought for Ramsay Bolton in the Battle of the Bastards only to again swear fealty to the Starks. The last Karstark, Alys, died fighting for humanity against the army of the dead.

Another northern house with continuously changing loyalties, House Umber made it all the way to season 8 before going extinct. After betraying Rickon Stark to Ramsay Bolton—ultimately leading to Rickon’s death, along with his guardian Osha—House Umber fought against the Starks in the Battle of the Bastards. The final Umber, Ned, and his men were slaughtered by the Night King’s army at their home in Last Hearth.

The last two members of House Clegane went down together, in a cascade of stone and flame. Though they weren’t technically a noble house—they were knights given land, rather than lords—House Clegane has been one of the more prominent Lannister vassals in the series. The Mountain Gregor Clegane, formerly the head of the house, has technically been dead since season 4, but finally lost whatever life remained to him in the penultimate episode of the final season. Sandor Clegane, better known as the Hound, became a favorite of many viewers before his end.

Houses at risk of extinction

If we are being realistic, every single house in Westeros is at risk of extinction. Some of them were barely mentioned in the show, and don’t warrant a spot here. Some, like the Freys, have seen heavy losses but still have enough women to conceivably continue. Others, like House Arryn, may only have one member left, but he is far from the fighting and likely to survive.

There are only two Targaryens left in the world.

Robert Baratheon strove to completely wipe out the Targaryen line long before the events of Game of Thrones began. Daenerys Targaryen and her brother Viserys both survived the massacre of their family line, as did the hidden son of Rhaegar Targaryen and Lyanna Stark. Now, that hidden son—who we know as Jon Snow—and Daenerys are the only people with Targaryen blood left. If both of these characters were to lose their lives, one of Westeros’ most ancient bloodlines would be eliminated forever.

Assuming Euron is dead—he’d better be—there is only one Greyjoy left.

Yara Greyjoy, now ruling from Pyke, is the last to carry her family name. The Greyjoy family has been slowly losing members—get it?—since season 3. Yara and Theon’s father Balon was the first to go. He was murdered by his brother Euron in season 6, creating a power struggle between the remaining family members. Theon gave his life to protect Bran Stark from the Night King, and a few episodes later Euron took a sword from Jaime Lannister through the gut. With all the male members of her family gone, Yara is the final Greyjoy and ruler of the Iron Isles.

I know you don’t want to hear this, but the end of Game of Thrones could also mean the end of the Starks.

There are still four people who carry Stark blood—yes, Jon still counts as a Stark—but we haven’t seen the final battle yet. On top of the potential to lose at least a few more Starks in the series finale, at least one Stark will likely never have children. Bran, now the Three-Eyed Raven, doesn’t seem likely to copulate anytime soon.

Some people may be rooting for an end to all Lannisters, and they might see that dream come true.

There were too many Lannisters to count when Game of Thrones began. Through eight long seasons, this ancient house has slowly been whittled away. Tywin Lannister died all the way back in season 4. Lancel Lannister was killed when Cersei destroyed the Great Sept of Baelor. Even Cersei and Jaime finally lost their lives in an underwhelming fall of stones as the Red Keep was destroyed. Though there may be a few unmentioned Lannisters in the world, that leaves Tyrion as the sole known Lannister left wandering Westeros.

Just a few episodes ago, we thought House Baratheon was gone for good.

With Gendry Baratheon’s status-change, however, House Baratheon is back. The official house went extinct with the death of Robert Baratheon. His three legally acknowledged children were, in fact, products of the incestuous relationship between Cersei Lannister and her twin Jaime. He had dozens of children through various women, all unacknowledged bastards. One such bastard was Gendry, whose new status as a true Baratheon revitalizes a house almost as old as the Targaryen dynasty.

Catelyn Stark’s former house is hanging on by a thread. There are, as far as we know, three Tullys left.

The wars and betrayals in Game of Thrones have been chipping away at House Tully for seasons. The patriarch of the house died back in season 3. That same season, Edmure Tully was married to Roslin Frey just before the bloody events of the Red Wedding transpired. Brynden the “Blackfish” Tully, Catelyn and Edmure’s uncle, lost his life to the Lannister and Frey forces in season 6. The only Tullys left are Edmure, his wife Roslin—who hasn’t been seen in seasons—and their unnamed child.