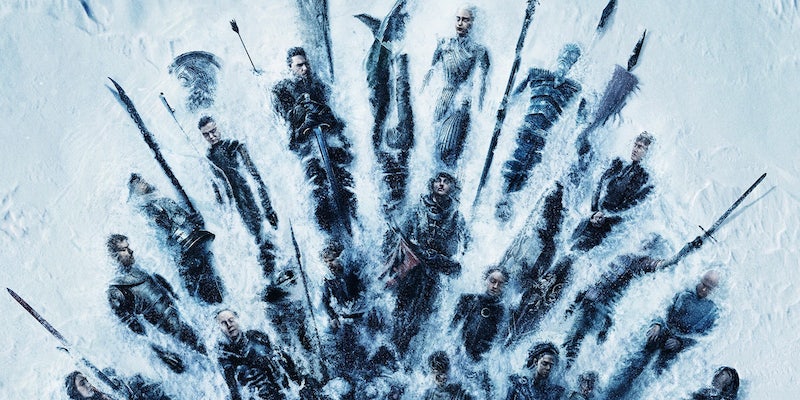 Who will survive ‘Game of Thrones’?

Fans think they found a clue.

We’ve already analyzed Game of Thrones trailers, interviews, and magazine articles for any hints as to where its characters might end up, but the latest poster is giving everyone something new to chew over.

Released shortly after the latest teaser trailer hinted at the doom to come in Winterfell, HBO released a chilling poster to accompany it. In a way, it harkens back to the show’s very first scene—the Night’s Watch brother who finds a group of dead wildlings strangely arranged in the woods—as most of the show’s surviving characters are frozen and arranged to form the outline of the Iron Throne. Visually speaking, Game of Thrones has taken the nihilistic route and it looks great.

But does the placement of certain characters indicate what might happen to them? If you ask Reddit, it’s certainly a possibility. Pointing the location of characters on the poster as well as the divide between Jon Snow and Daenerys Targaryen, they posited that the characters on the left side were likely to live while the ones on the right were more likely to die.

On its own, the theory is kind of silly. (And the poster did express doubt that HBO would group the surviving characters on one side with the dead ones on the other.) George R.R. Martin has called the end of A Song of Ice and Fire (which Game of Thrones is based on) “bittersweet,” and the end of Game of Thrones will likely have some things in common with the end of ASOIAF.

At the very least, it’s very unlikely that everyone will die and the Night King will launch an eternal winter onto Westeros. But that doesn’t mean everyone will live, either. Here’s where we stand ahead of the April 14 season 8 premiere.

Game of Thrones season 8: Who dies?

Although Ned Stark’s execution and the Red Wedding were some of Game of Thrones’ most devastating moments, the surviving Stark clan—Jon (who we’re counting as a Stark here even though he’s also a Targaryen), Sansa, Arya, and Bran—have been more or less OK for some time. They’ve faced dangerous situations, manipulation, and betrayal, but after season 6, any threat to their lives felt temporary. That probably isn’t the case for season 8.

As the two members of House Stark who can fight, Jon and Arya are in the most immediate danger. They’ll be in the thick of the action. Jon is probably OK until at least the final confrontation with the Night King (wherever that happens) because of his potential status as The Prince That Was Promised, but his recklessness could end him sooner. Arya, however, doesn’t have that guarantee. Plus, Arya still has her kill list, and she could easily die as a result of trying to complete it.

Sansa and Bran won’t be fighting with swords, but that doesn’t mean they’re safe. Sansa’s still playing the political game amid an uneasy truce between feuding houses, any of which could betray her. Bran’s battlefield is a mental one throughout time, and we’ve seen him clash with the Night King via vision before; Bran’s lost both encounters so far. But if their own strengths aren’t turned against them, they could just as easily end up among the dead at Winterfell.

Dany has spent most of Game of Thrones trying to get the Iron Throne, but there would be a certain bittersweet aspect to her arc if she got close but never got it. Although she might play into the endgame like Jon as the other potential Prince That Was Promised, there are other factors that could contribute to an early grave.

She’s about to enter what will essentially be an enemy territory with a not-so-welcome reception at Winterfell. There is the very likely possibility that she will become pregnant, and surviving after birth isn’t a guarantee. Another aspect of Azor Ahai—another version of TPTWP—includes sacrifice, so some fans believe that either Jon or Dany might have to sacrifice one another to create a weapon to defeat the Night King, which would spell doom for either one of them. But they’re both attuned to just what the Night King is capable of, so if it saved Westeros, they’d probably do it.

After being the cause of much of Westeros’ chaos, can any of the Lannisters survive what’s coming? If they play their cards right, it’s always possible.

Based on what we know from previous seasons, it’s highly probable that Cersei and Jaime will both die. Jaime, who’s been on a bumpy path toward some kind of redemption for several seasons, is keeping his promise to fight for the living—and chances are, he’ll be in the middle of that Winterfell battle and any battle to come, assuming he survives the first one. Cersei, however, is more than content with causing even more problems for everyone in Winterfell. If King’s Landing falls and Cersei survives it, there is the chance that the victors show mercy, but it is unlikely. Too much has happened, and even if they did, Cersei is still on Arya’s kill list.

Tyrion, however, could go either way. He could be a shocking casualty or play his hand too much, but he could just as easily ascend to obtaining even more power than he already has.

There’s no question that the Night King’s gonna bite it this season, right? There’s no ending where he wins without it being a total bloodbath and the term “bittersweet” still applies to the show’s ending. It’s more of a matter of who kills him, where it happens, and when it happens (both in location and episode).

The Stark and Targaryen advisors

Being a Stark or Targaryen advisor has, more or less, turned out alright with the exception of Melisandre’s banishment in season 6. They have the trust of Jon, Bran, and Dany, they’re close to the action without necessarily having to fight in a war (although Davos Seaworth has gotten his hands dirty), and they can keep those rulers in check if need be.

A ruler’s ear doesn’t guarantee safety, however. Before departing, Melisandre told Varys that she has “to die in this strange country, just like you” for why she plans to return to Westeros after a stop in Volantis. It’s unclear if it’s a gut feeling or if she saw something in the flames, but it doesn’t look good for either of them.

Although Davos doesn’t see himself as a fighter he might have to become one again. Samwell Tarly and Missandei are not fighters, so they have a better chance of escaping violence on the battlefield by not being on it, but if the Night King can breach any strongholds, they might not be so lucky.

Whether it’s for duty, glory, or more selfish reasons, these people are more than willing to put their necks out for whichever crown they serve. With a war on the horizon against the dead and the living, their chances don’t look great.

The Hound, Jorah Mormont, and Brienne of Tarth will all be part of the battle in Winterfell, each of them with their own set of morals to keep them fighting long after logic tells them to retreat. Theon Greyjoy, who’s on a path to redemption himself, is venturing to rescue his sister. Whether he’s able to push through and accomplish it without clamming up again, will be key.

Euron Greyjoy and the Mountain are far away from Winterfell, but that doesn’t mean they’re safe behind King’s Landing’s walls. For one, the dead could come their way. But they’ve accumulated more than a few enemies along the way—the Hound, Arya Stark, and Theon Greyjoy, for starters—so they could just as easily survive the dead only to be gutted by the living.

And for the Mountain, if that’s the case, that means one thing: Cleganebowl is still on the table.