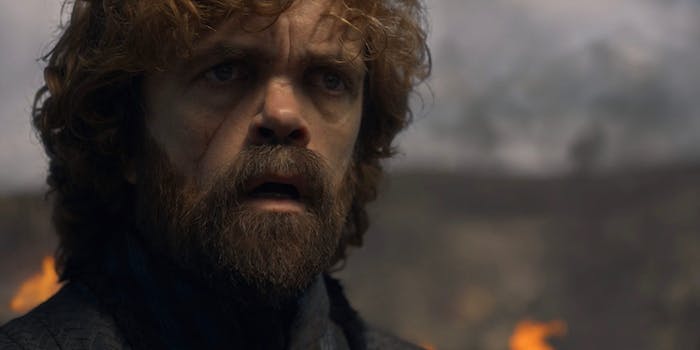 Who died in the Battle of King’s Landing?

The Battle of Winterfell might have just gotten eclipsed in carnage by the utter destruction on King’s Landing’s doorsteps.

After seasons of being persuaded to do otherwise by her advisers, Daenerys Targaryen finally brought fire and blood to King’s Landing. Still grieving Missandei’s death in “The Last of the Starks,” Dany was more emotionally vulnerable than she’s ever been—and she was done listening.

She may have only had one dragon left, but she and Drogon easily took out all of the Iron Fleet. She wasn’t done there, turning Drogon’s flames toward the capital and the Red Keep.

Anyone who complained earlier in the season about the show’s toothlessness over its ability to kill off its remaining characters can now rest assured: Game of Thrones is not only capable of killing a lot of characters at once, but major ones at that.

Who died at the Battle of King’s Landing?

Cause of Death: Burned alive by Drogon for betraying Daenerys

Varys, the Master of Whispers in King’s Landing who survived more kings than we can keep track of, finally met his cruel end at the hands of the first queen he ever served. (Technically, he died before the battle, but it’s close enough to it that we’ll count it.) In “The Last of the Starks,” Varys learned of Jon Snow’s parentage from Tyrion Lannister and openly questioned if maybe Jon was the better ruler. He started to make his moves in “The Bells” with a letter he intended to send, a young girl to feed him information, and by bringing the idea of ruling Westeros to Jon, who still doesn’t want the job. But what Varys didn’t anticipate was that not only would Jon not want it, but Tyrion would eventually sell him out to save his own skin. Calling back to their first conversation in season 7, Varys looked Dany in the eyes and told her how she was failing the people of Westeros. But she also promised to burn Varys alive if he betrayed her. So he did. And so she did.

Cause of Death: Stabbed in the back with a spear by Grey Worm

Harry Strickland, the leader of the Golden Company, rode in (sans elephants) and swore fealty to Cersei Lannister after she took out another loan from the Iron Bank of Braavos. But the Golden Company, despite its numbers, seemed to be a nonentity in the Battle of King’s Landing. Drogon’s flames took out much of their numbers, but Harry Strickland survived the initial blast. Despite running alongside the Unsullied and Dothraki soldiers toward the capital, he didn’t make it far.

Cause of Death: Stabbed in the gut by Jaime Lannister

Euron Greyjoy took control of the Iron Islands, surprised Dany’s fleet twice with his own ships, and managed to secure a future at Cersei’s side. He even miraculously survived his entire fleet being destroyed by Dany and Drogon. But when he came across Jaime trying to sneak into the Red Keep, he simply couldn’t resist a fight with the man who captured Cersei’s heart and then betrayed her. While Euron got the upper hand on Jaime by mortally wounding him, Jaime got the last laugh and the final blow.

Cause of Death: Head smashed by the Mountain

In a classic case of “Master Killed By His Creation,” Qyburn, Cersei’s ethically questionable Hand of the Queen, tried to get the Mountain to stay by Cersei’s side after the Hound came to pay his big brother a visit. But the Mountain wasn’t having any of it. The Mountain took Qyburn by the throat, shoved him into a wall so that it cracked his skull, and threw him aside. If the first blow wasn’t enough to kill Qyburn, the second one finished the job.

5 and 6) Ser Gregor and Sandor Clegane (a.k.a. the Mountain and the Hound)

Cause of Death: Tumbled out of the Red Keep and into dragonfire after Cleganebowl became a reality

For years, Cleganebowl was a pipedream of tinfoil theorists and meme enthusiasts alike, but as King’s Landing burned to the ground, it finally came into fruition. The Hound’s thirst for revenge burned so strong that he rode all the way down to King’s Landing, stopped Arya from making his mistakes, and even dove straight into the flames. Along the way, they each got hits on each other, but thanks to Qyburn, the Mountain was unaffected by almost all of them. In the end, the fire took them both out.

7 and 8) Cersei and Jaime Lannister

Cause of Death: Crushed to death in each other’s arms in the cellars of the Red Keep by the crumbling ceiling

We already knew that Jaime was probably a goner after Euron stabbed him, but he cemented his fate by going back to Cersei one last time. They found one another amid the chaos and, as Tyrion advised Jaime, they tried to escape. And it looked like they would once again manage it up until the moment they discovered the rubble blocking their exit in the cellars. Trapped alongside the skull of Balerion the Black Dread, they held each other. Jaime did get his final wish in the end: to die in the arms of the woman he loved.