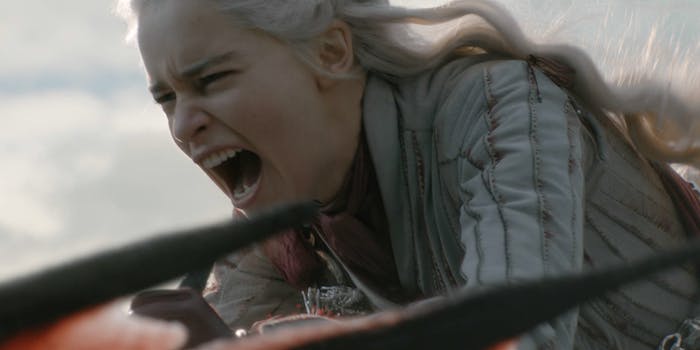 Could a season 2 vision point to Dany's fate?

Warning: This article contains spoilers for the latest Game of Thrones episode, “The Last of the Starks.”

There are only two episodes of Game of Thrones left, and if a new season 8 theory is to be believed, one of them will end with the destruction of King’s Landing.

After last week’s gut-punch of an episode, many viewers have lost all patience with Cersei Lannister. They’re hoping to see the ultimate showdown between her and Daenerys Targaryen.

After a surprise attack resulted in the death of Rhaegal and the execution of Missande, Dany concluded the episode at her wit’s end. While some fans are all-in for the rise of the Mad Queen, some feel that Dany could never kill so many innocents just to reach her enemy.

One Reddit theory, however, postulates that we’ve known about Dany’s inevitable destruction of King’s Landing for years. The theory, posted by Redditor u/Twisted8999 a few days ago, relies upon a vision Dany had in the season 2 episode “Valar Morghulis.” Here’s what you need to know.

As she navigated the House of the Undying in search of her captured dragons, Dany experienced a strange, extended vision. She began in a decimated King’s Landing, with specks of white falling all around her. Most people assumed that this white was falling snow—a warning about the impending White Walker threat. Perhaps the vision pointed to a potential future in which the Night King was victorious?

Twisted8999’s theory assumes instead that it was ash. The phrase “queen of the ashes” has been thrown around a lot in the last few seasons. Many people online think we will see Dany assume the role before the series concludes. It’s not a bad theory. For one, Dany didn’t look overly cold in the shot of her walking through the “snowy” chamber. There was also an eerie stillness to the scene, without a single soul in sight. We saw what dragonfire could do to a body—and even armor—in season 7’s “The Spoils of War,” so the ash coating the floors, pillars, and walls of the room could conceivably be human remains.

With the threat of the Night King eliminated (or so we hope), this theory makes even more sense. Many people thought the army at Winterfell wouldn’t be enough to stop the White Walkers, which would have allowed them to advance toward Westeros’ capital. The possibility *seems* to have been completely eliminated with the Night King, allowing space for an alternate explanation.

That’s not all people saw in the vision, though. Dany approached the Iron Throne but ultimately turned her back on it in the interest of her dragons, which many saw a possibility for the series’ conclusion. They believe that this scene indicated that Dany’s destiny was never to become queen, but to bring dragons back into the world. She may only have one left, but the dragon queen certainly fulfilled this destiny.

Issues with the Mad Queen theory

Unfortunately, the theory is not ironclad. If you look closely, you can see icicles on the metal braziers behind Dany, indicating that the falling white is, in fact, snow. This would mean that the vision either didn’t come to pass or was, in fact, a warning of the impending northern threat.

In the comment section for the original theory, several other guesses were laid out. Some commenters believe that the next part of Dany’s vision points to her inevitable death. “If it is her future, the very next part of this scene was her meeting drogo and her child in the afterlife. Soooooooo. She gonna die,” KarmaPenny wrote.

This theory hinges on the scene in which Dany reunites with Drogo and their child, both of whom are deceased. Ultimately, she is forced to leave them to locate her stolen dragons, but some people think it was pointing to her death. They believe that Dany will try for the Iron Throne but will never manage to take it. Before she can, she will die and be reunited with her fallen love, child, and dragons.

Another theory turns the focus on Cersei instead. Some redditors believe that the Lannister queen will be the one to destroy King’s Landing, rather than the invading army. If Cersei decided to unleash wildfire upon her people again, it seems likely that very little would remain in the aftermath. If she chose to “blow it all to shit,” as one redditor eloquently put it, the only people likely to survive would have Targaryen blood. Since we don’t know if Jon carries the fireproof gene, it could leave a solitary Dany to rule over nothing but the scattered ash.

Even if all the theories miss the mark, the next couple of episodes are sure to be brutal, bloody, and drenched in dragon fire. Regardless of how it all ends, King’s Landing is about to become one of the most dangerous places in Westeros.