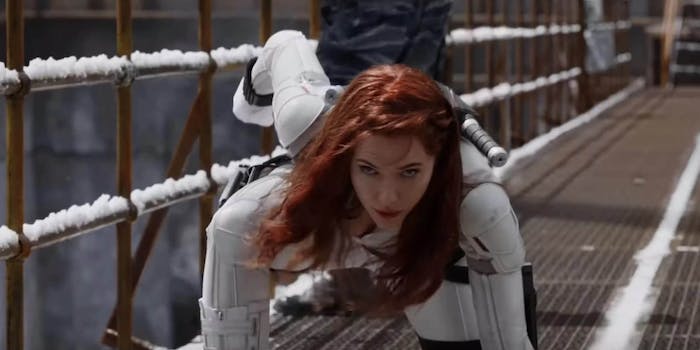 It looks like ‘Black Widow’ went through a last-minute rewrite

The film's writing credits are totally different from what we saw last year.

The latest Black Widow teaser includes some new footage, but the most interesting detail actually arrives in the credits. The writing credits have changed significantly since our last update, with a longtime Marvel writer now credited with the full screenplay.

Jac Schaeffer, the writer/director behind the sci-fi movie TiMER, was initially hired to pen Black Widow in 2017. Then in Feb. 2019, Ned Benson (The Disappearance of Eleanor Rigby) was hired to rewrite her script. They were set to take joint credit as writers, but the new trailer only gives them a “story by” credit, while Eric Pearson is credited with writing the screenplay. A “story by” credit generally means that concepts from the initial screenplay are still there, but the final script is the result of a start-to-finish rewrite by someone else.

Pearson has been writing for Marvel Studios for almost a decade, so his involvement looks like the studio stepped in to reshape a script that, for whatever reason, was not deemed suitable. Pearson is best known for writing the Thor: Ragnarok screenplay, but he also worked on Agent Carter, and wrote a few of the Marvel One Shots from 2011 to 2013, including the short films that pitched Peggy Carter and Agent Coulson as solo heroes. He started out in the Marvel Writers’ Program, an in-house project where new writers would pitch and write ideas for the studio. Other graduates include Black Panther co-writer Joe Robert Cole, and Nicole Perlman, who wrote the original Guardians of the Galaxy screenplay.

Pearson also did uncredited rewrites for Ant-Man, something he discussed in interviews while promoting Ragnarok. This kind of thing isn’t unusual, especially for a big studio franchise movie. For instance, Joss Whedon did uncredited rewrites on Captain America and Thor: The Dark World, which probably helped to streamline the tone of the MCU when he was still in charge of the Avengers movies.

However, it’s less typical for the rewrite process to result in a total change of credit, especially this late in the game. Black Widow filmed between May and October 2019, so there was a pretty short window of time for Pearson to rewrite that screenplay after Benson was announced as a co-writer in February. We may never know why the movie needed such a drastic rewrite, but with someone like Pearson at the helm, Black Widow is likely to be a reliably conventional fit for the Marvel Studios brand.