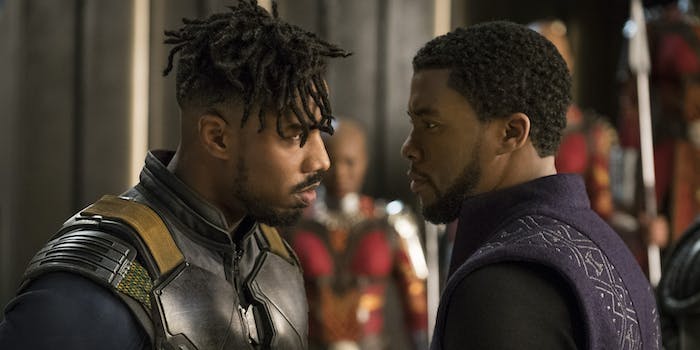 With gorgeous visual design and a thoughtful political story, 'Black Panther' sets an example for other superhero movies.

This review contains no major spoilers for Marvel’s Black Panther.

Following his father’s death in Captain America: Civil War, T’Challa assumes the throne of Wakanda, a technologically advanced nation in East Africa. Benefiting from a massive supply of the rare metal Vibranium, Wakanda hides its power from the outside world, disguised by a cloaking device and Western expectations of African poverty.

Inside Wakanda’s invisible shield, we visit a utopian society of futuristic gadgets, vibrant visual art, and a kind of gender equality that puts other Marvel movies to shame. Black Panther includes as many female characters as Wonder Woman, with a central role for the king’s all-female army of guards, the Dora Milaje. Danai Gurira shines as their leader, Okoye, combining stern loyalty with a sly sense of humor. Letitia Wright is a breakout star as Princess Shuri, a witty and effortlessly cool teen genius. She designs the Black Panther costume and weapons, offsetting her brother’s serious nature with some affectionate mockery.

There’s no clumsiness in this introduction to Wakanda, setting out an entire political system in just a few scenes. T’Challa’s royal lineage is affirmed by ancient traditions, an idea we don’t typically associate with modernity. Therein lies the key tension of recent Black Panther comics, where we root for T’Challa as a hero, while also realizing the flaws of monarchy. Yes, his coronation ceremony is beautiful and exciting, but is it really a good idea to test someone’s leadership qualities with single combat?

Instead of following a tired old structure for superhero origin stories, Black Panther dives into an expansive fantasy setting with an ensemble cast of shifting alliances. In that sense, it may be the best adaptation we’ve seen from Marvel Comics. Director Ryan Coogler and his co-writer Joe Robert Cole take some pretty complex political themes from the comics and articulate them in ways that even younger kids can understand.

Between this and Thor: Ragnarok, it’s fascinating to watch how the new generation of Marvel directors develop their source material. Most of the franchise is straightforward American action/comedy, often with a supporting cast of military or law-enforcement characters. Captain America: The Winter Soldier tested the waters with a story about surveillance culture and the deep state. Then Thor: Ragnarok arrived last year with a subversive anti-colonialist message beneath its comedic surface. Now, Black Panther plunges into the deep end for a debate about black identity, privilege, international aid, and the far-reaching impact of colonization.

Prior to release, much of the conversation around Black Panther related back to its casting choices. As a sci-fi/fantasy blockbuster with a majority-black cast, its mere existence is a political statement. A generation of kids are going to grow up having seen T’Challa and Shuri and Okoye be joyful and powerful; a fresh breath in the stiflingly white atmosphere of mainstream Hollywood. But beyond the simple power of representation, Black Panther puts politics in the foreground.

Wakanda represents a utopian ideal, but utopias are often defined by what they exclude. The core conflict here is whether Wakanda should use its technology to bring aid to neighboring countries or even reach out to the African diaspora around the world. Nakia raises this question toward the beginning of the movie, but it becomes more urgent when Erik “Killmonger” Stephens (Michael B. Jordan) arrives. Erik invites obvious comparisons with X-Men‘s Magneto, another antagonist with sympathetic motives. For the first time since Loki, Marvel Studios gives us a supervillain with a compelling emotional arc.

In the classic vein of superhero/villain pairings, Erik and T’Challa mirror each other. Erik is angry, isolated, and desirous of power. T’Challa is stable and surrounded by trusted friends, but he’s still unsure of his readiness for the throne. Both of their ideological positions are understandable. T’Challa has a strong sense of justice, but his duty to Wakanda makes him reluctant to help outsiders. Meanwhile, Erik sees the power of Wakanda’s technology and wants to use it to free black people from oppression worldwide. He’s led a life where violence equates to strength, contrasting with T’Challa’s balance of diplomacy and mythic heroism.

Considering where the MCU began—with Tony Stark gleefully testing his new missiles in Afghanistan—it’s hard to believe what Disney allowed Ryan Coogler to include in this movie. When CIA agent Everett Ross shows up (sidenote: Martin Freeman still can’t do a damn American accent), he seems comically pathetic compared to Okoye’s grace or Shuri’s expertise. However, we also get some surprisingly straightforward commentary on America’s role as a violent imperial power. When they mentioned how the CIA and US military intentionally destabilize foreign governments, I was nodding along like, “Yes, of course,” before remembering this is a Marvel superhero movie. This film that will be watched by kids and grandmas and comic book nerds is exploring some quite radical political truths. And it all happens in a colorful, optimistic story with no overly grim violence or cynicism.

Like George Lucas with Star Wars, Ryan Coogler has a holistic approach to worldbuilding, where music and visual design play a vital role. Collaborating with costume designer Ruth Carter and production designer Hannah Beachler (both of whom deserve Oscar nominations next year), he creates an immersive and well-researched new addition to the Marvel universe.

Each of T’Challa’s advisors comes from a tribe modeled on real-world sources. In aerial shots of the Golden City, we see unique and beautiful examples of afrofuturist architecture. When they cut to a scene in the U.K., I actually laughed out loud because Coogler chose a building that looks like a miserable grey rectangle, further highlighting the beauty of Wakanda. Black Panther‘s visual design is a perfect blend of form and function, not just as a tool for the audience to appreciate Wakanda, but as an illustration of characters having personal taste.

It’s rare to see any action blockbuster where more than one character has visible fashion sense. Actually, the only example I can think of is xXx: Return of Xander Cage (an underrated gem, BTW). Unless it’s a fantasy setting, women are generically stylish and men wear suits or T-shirts, avoiding anything as dangerously unmasculine as fashion. Black Panther bulldozes that idea by giving every character a specific look. Nakia favors green, and has at least two different hairstyles. Shuri wears high-tech athletic fabrics. T’Challa is appropriately formal and regal, while his rival leader M’Baku (Winston Duke) styles himself as a warrior. These characters put thought and care into their appearance, rather than donning a plain T-shirt selected for maximum relatability among American men aged 18-34.

I look forward to reading some expert coverage of the music, because it played an equally important part in making Black Panther stand out from the crowd. Composer Ludwig Göransson researched South African and Senegalese music for a percussion-heavy score, featuring several interludes with live drumming onscreen. A combination of hip-hop (Kendrick Lamar) and African traditional music is a natural choice for Black Panther’s legacy, offering a refreshing change from Marvel’s usual boilerplate orchestral scores.

If Black Panther displays any weakness at all (besides Freeman’s meandering accent), it’s in the combat scenes, which are sometimes a little muddled. This isn’t an unusual problem for Marvel, continuing the Russo brothers’ habit of zooming too close when we need to see a wide shot during hand-to-hand fights. But given the Dora Milaje’s awesome choreography and cinematographer Rachel Morrison’s beautiful work elsewhere in the movie, this isn’t a major issue. And, joy of joys, we don’t have to suffer through a colossal CGI setpiece at the end. Coogler keeps the action succinct and meaningful, which is really the best thing to do unless you’re an experienced stunt director like the creators of John Wick.

Smart, accessible, and thoroughly fun, Black Panther is a new high for Marvel Studios. The visual detail invites multiple viewings, and its political storytelling proves that serious topics don’t have to come in dark and gritty packages.