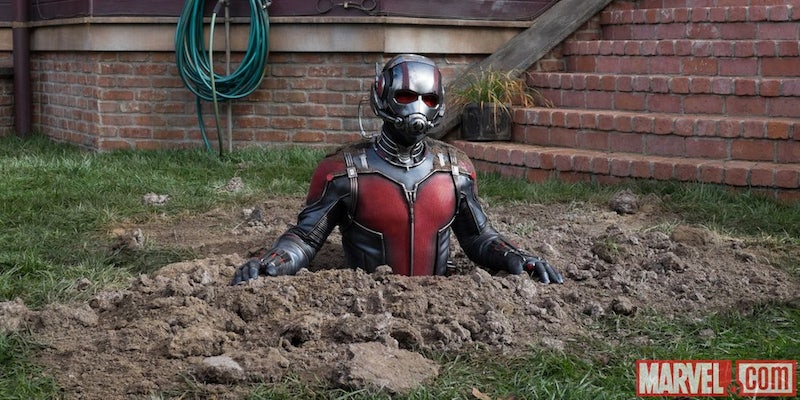 Everything you need to know about Ant-Man

Who is Ant-Man, and why is he getting his own movie? We have all the answers.

Ant-Man is this weekend’s big blockbuster release, answering the question of what Honey, I Shrunk the Kids would be like as a $130 million action movie starring Paul Rudd.

If this premise sounds a little dubious, don’t worry. We’re here to explain why Ant-Man is a thing, complete with a dive into his classic comic book history.

Rather than being just one guy, Ant-Man is a title used by several different people who have donned the costume over the years.

The first was Dr. Henry “Hank” Pym (played by Michael Douglas in the movie), followed by Scott Lang (Paul Rudd) and two lesser-known characters who briefly stole the Ant-Man suit. This costume resembles body armor with a vaguely ant-like helmet. It allows the wearer to communicate with ants and shrink in size while retaining disproportionately powerful strength. 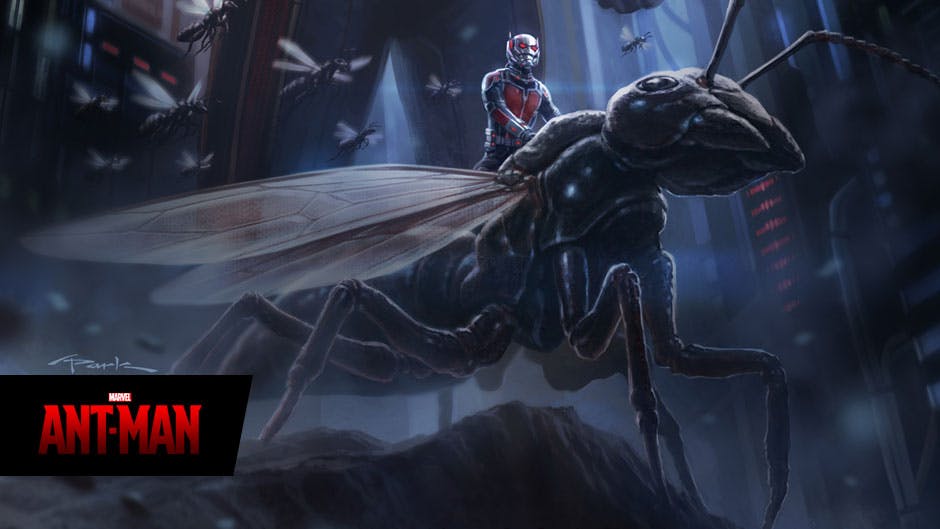 While Pym is the most famous Ant-Man—a regular member of the Avengers team, often alongside his wife Janet “The Wasp” Van Dyne—Marvel Studios opted to make the movie about Scott Lang instead. This may be because Pym has historically been kind of an asshole.

First introduced in the 1962 sci-fi comic Tales to Astonish #27, Hank Pym began his narrative life as scientist who invents a “shrinking serum.” 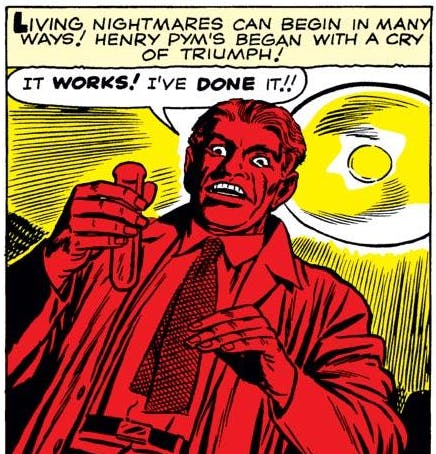 After shrinking himself and accidentally becoming trapped in an anthill, he decides the serum is too dangerous and must be destroyed. This was meant to be a one-off story, but it was popular enough that the Tales to Astonish team (including editor Stan Lee and artist Jack Kirby) brought him back as a superhero in issue No. 35.

Within a couple of pages, Pym had built a cybernetic helmet that allowed him to communicate with ants and was using it to defeat communist spies. Yes, the 1960s were a wild time in superhero comics.

One of the coolest aspects of these early comics is the way they illustrate Pym’s tiny size. He uses judo moves on rhino-sized ants, commands an army of ant pals to run up someone’s pants, and shoots himself out of a catapult made from an ashtray and a rubber band. These wacky scenarios may be why Marvel decided to make a movie about Scott Lang instead.

Hank Pym combines some very silly superpowers with an incongruously serious tone; a risky formula for a modern movie. For example, during his first Avengers appearance he basically freaks out and attacks all the Avengers, prompting his wife Janet Van Dyne to explain that he’s been having emotional problems due to the pressures of being a superhero. 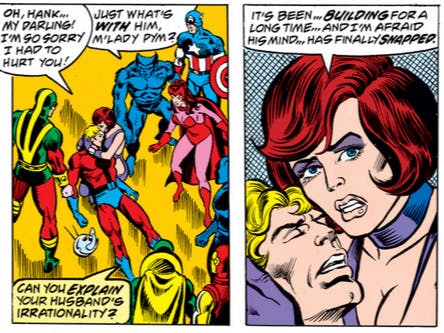 Infamously, their marriage later ended after a domestic violence scene where Pym gave his wife a black eye. This backstory won’t appear in the movie, but its legacy lingers on. It’s not the best way to introduce a new family-friendly franchise. The film instead depicts Pym as an elderly man with an adult daughter, and Janet Van Dyne—to the consternation of many Wasp fans—is already long dead.

After his daughter Cassie fell ill, Lang stole the Ant-Man suit to break into a lab where he believed he could find a doctor who could cure her. This began a chain of events leading to him becoming a superhero and joining the Avengers, which may yet happen in the Marvel Cinematic Universe (MCU.)

Ant-Man has been described as a heist movie, with director Peyton Reed comparing Paul Rudd to George Clooney in Ocean’s Eleven. The story riffs on Lang’s history as a thief, although his daughter seems to have a smaller role than in the comics. Early trailers had fans worried that she’d been written out entirely, but this TV spot suggests that fatherhood is still a big part of Scott Lang’s life.

So, why is Ant-Man such a big deal?

If you’re still wondering why Ant-Man—a middle-aged white guy with no superpowers—is getting his own movie at this point in the Marvel franchise, that’s understandable. Arguably, the main reason is that he was championed by filmmaker Edgar Wright.

Wright spent years working on Ant-Man, submitting his first draft of the script with writer Joe Cornish in 2001 and solidifying his relationship with Marvel Studios in the late 2000s. So while it may seem a little odd to launch Ant-Man in 2015 after years of other Avengers movies, Marvel had already invested a lot in the project. Plus, Wright has a lot of geek credibility thanks to films like Shaun of the Dead and Scott Pilgrim, making him a perfect choice for a genre-savvy superhero movie.

Except in May 2014, just weeks before filming was due to begin, Wright abruptly quit due to creative differences with Marvel—supposedly after the studio enforced drastic changes to his screenplay at the last moment. If this had happened a few years earlier, Marvel might have shelved Ant-Man like the unfilmed Black Widow script, but it was far too late for that. The studio hired new writers to revise the script with contributions from the cast, and Peyton Reed took over as director. 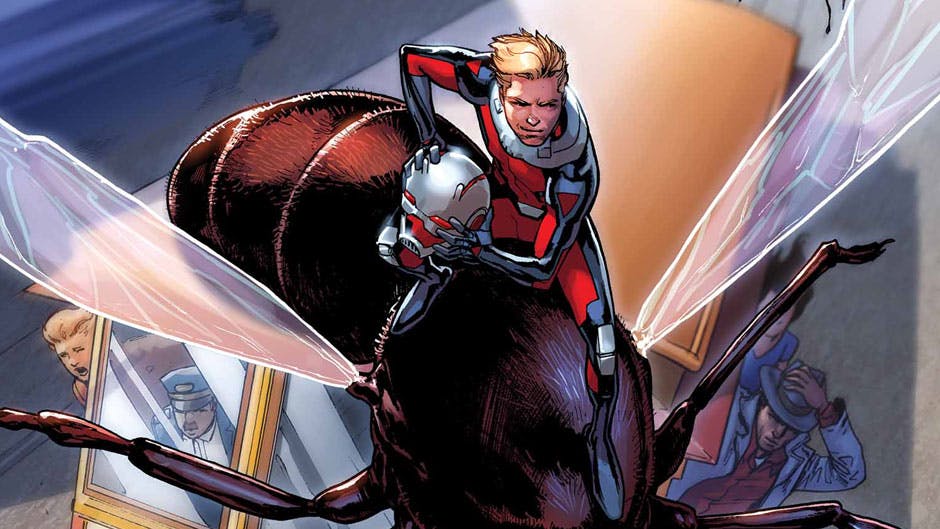 These events required a lot of damage control, with Marvel simultaneously reassuring fans that the film retained Wright’s sense of humor, and that the studio’s changes had improved upon his original idea. Many fans are still curious about what happened behind the scenes, but either way you have to feel some sympathy for Peyton Reed. If Ant-Man is a hit like Guardians of the Galaxy, people will attribute it to Edgar Wright’s vision. If not, then fans will surely blame Marvel and Reed.

How does Ant-Man fit into the MCU?

Marvel is dead set on launching franchises rather than one-offs, but Ant-Man may be the first MCU feature in years to stop at just one film.

Scott Lang will show up in Captain America: Civil War and may have a role in later Avengers movies, but it’s hard to see how a solo franchise would benefit the MCU as a whole. Ant-Man doesn’t have a specific hook like Captain America, Guardians, or Thor. He’s just a regular guy with a special suit, and his demographic (white men aged 30-50) is already covered by literally all of Marvel’s current solo franchises.

Plus when you look at Marvel’s full slate of upcoming movies alongside all of the other superhero franchises from other studios, it’s hard to see where Ant-Man 2 could fit between now and 2020. In a field this crowded, Marvel may be better off just using him as a side-character.