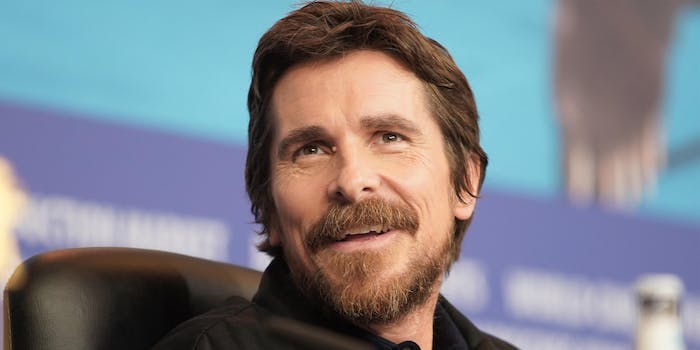 Years after finishing an iconic run as Batman in the Dark Knight trilogy, Christian Bale is reportedly dipping his toes back into superhero films.

According to a report from Collider, Bale is in talks to join the cast of Thor: Love and Thunder, Taika Waititi’s follow-up to Thor: Ragnarok and one of the first major updates we’ve heard about the film since Marvel Studios head Kevin Feige announced it at San Diego Comic-Con. Little is known about which character Bale would portray, and for now, Marvel isn’t commenting. (It’s also possible that talks could fall through.)

So far, all we know about Love and Thunder is its cast. Chris Hemsworth and Tessa Thompson are reprising their roles as Thor and Valkyrie, and Natalie Portman is returning to the Marvel Cinematic Universe as Jane Foster and the Mighty Thor. The possibilities as to who Bale could play are endless, but fans have already settled on a few possibilities.

The most likely? Because Love and Thunder is taking at least partial inspiration from the 2014 Thor run that includes the introduction of Jane Foster as Thor from writer Jason Aaron, one likely candidate is Bale is portraying Dario Agger, the Roxxon Energy Corp CEO who clashes with Thor and gives up his soul to become the Minotaur. Another character who appears in Aaron’s run is Gorr the God Butcher, an alien who vowed to kill all gods after the death of his family because while they existed, they didn’t do as much to help others as they could.

Beta Ray Bill, a Korbinite with a horse-like head, is another possibility. First introduced in the ’80s, Beta Ray Bill fought Thor in combat and was able to lift Mjölnir for himself after defeating Thor; although Beta Ray Bill gave Thor his hammer back, Thor had Stormbreaker—the weapon that Thor now wields in the MCU—commissioned for him. But that’s not Beta Ray Bill’s only current tie to the MCU; Ragnarok gives a small nod to the character, who was in an earlier version of the story but cut so that Marvel would later be able to do the character justice.

But really, the limits of who Bale could portray in Love and Thunder, and the MCU itself, are endless. Waititi has already shown he isn’t afraid to push the boundaries of how weird the Thor films can get. And if that includes getting Bale to portray an actual Minotaur or an alien with a horse head? It’s all the better for us.