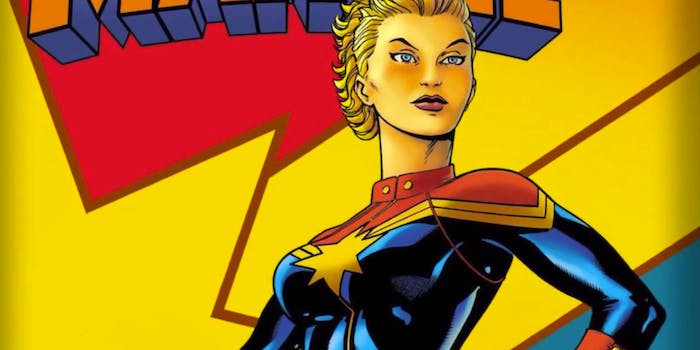 It's a good day for Captain Marvel fans.

After Marvel Studios disappointed fans by removing a Captain Marvel cameo from Avengers: Age of Ultron, it’s definitely time for some good news. Today, that comes in the form of the first production details for the Captain Marvel solo movie.

According to THR, screenwriters Nicole Perlman and Meg LeFauve are in talks to write Captain Marvel, which is due out in 2018. Perlman wrote the original draft of Guardians of the Galaxy during a stint in Marvel’s shortlived writing program, which contracted up-and-coming writers to work on scripts for the studio. She also wrote a Black Widow screenplay that unfortunately never saw the light of day, and went on to pen a Gamora comic following the success of Guardians of the Galaxy.

LeFauve’s only known writing credit is the animated movie Inside Out, although she previously worked as a producer. This may not sound like enormously relevant experience, but it’s worth remembering that the Russo brothers were best known for directing sitcoms before they took on Captain America: The Winter Soldier. Marvel’s creative hires may not always seem like the obvious choice, but they usually tend to work out.

It looks like Marvel is pursuing a majority-female creative team for Captain Marvel, much like how female showrunners were hired for Agent Carter and A.K.A. Jessica Jones. The contract with LeFauve and Perlman hasn’t been finalized yet, but since the film isn’t out for another three years, that isn’t a huge surprise.