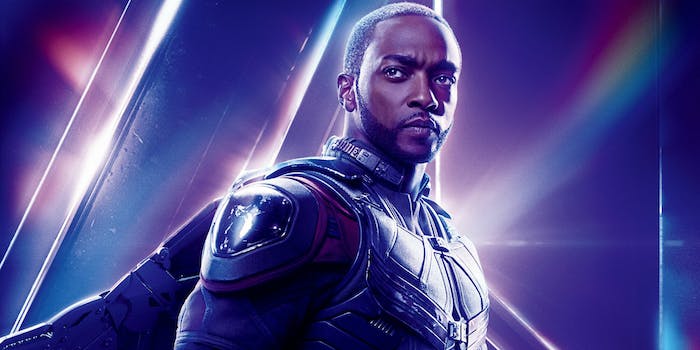 Marvel‘s spoiler paranoia has led to another strange tale from the Avengers: Endgame set. In an interview with IMDb, Anthony Mackie revealed that he didn’t know about his own character’s ending until Chris Evans told him. The scene was deemed such an important spoiler that the filmmakers didn’t tell him in advance.

Like the other characters who got dusted in Infinity War, Sam Wilson (a.k.a. the Falcon) only returned for the last act of Endgame. Sam Wilson appeared in the final battle with Thanos, but his most important role was during Steve Rogers’ send-off. After living for decades in an alternate timeline, Steve returned as an old man to give Sam his shield, officially passing on the mantle of Captain America. However, Mackie didn’t know he was the new Captain America until Evans leaked the news.

“We were at his house and he goes, ‘You excited?’ And I go, ‘What are you talking about?'” said Mackie.  “He goes, ‘You don’t know?’ He jumps up, runs out of the room and comes back in with the script.”

It was a case of life imitating art, with Evans being the one to pass the news on to his successor. “We cried. We drank. We laughed,” said Mackie. “I am very happy I got that moment with Chris.”

Unsurprisingly, it was a pretty emotional experience to film that scene together. Mackie said that he, Evans, and the Russo brothers all cried that day, and he’s very aware of the political significance of Sam Wilson becoming the new Cap. “It means a lot to me for my sons to see Captain America as a Black dude, and for me to be that dude to my sons,” he said. “So that moment was not just, ‘Hey, we’re acting.’ It was more of a thing.”

Sam Wilson isn’t expected to get his own movie franchise, but he may appear in ensemble movies during Phase 4 of the MCU. He’s also set to co-star in the first of Marvel’s Disney Plus miniseries, The Falcon and the Winter Soldier. Despite the title (which lists Sam as the Falcon rather than Captain America) it’s thought to take place after Endgame, with Mackie teasing an odd-couple dynamic that echoes his IRL friendship with Sebastian Stan.