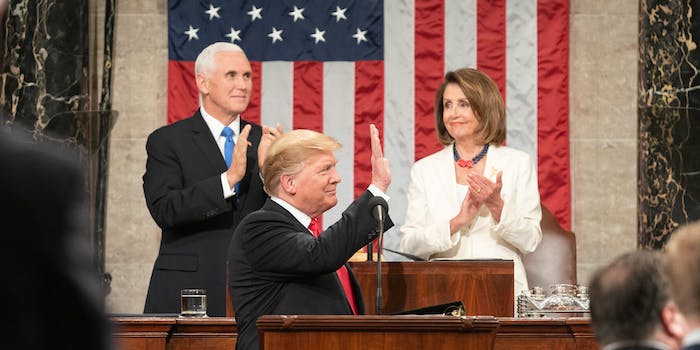 Trump pledged to close the digital divide. How will he do it?

The goal of bridging the gap is shared across the aisle.

President Donald Trump made a small shout out to bridge the digital divide in the United States during his State of the Union address this week.

Trump’s desire to connect more American households to high-speed internet is a goal shared by many of his potential 2020 election rivals. Last year, the Pew Research Center found that while 79% of suburban Americans have home broadband, only 63% of rural Americans said the same.

“I’m also committed to ensuring that every citizen can have access to high-speed internet including and especially in rural America,” Trump said during his speech on Tuesday.

Richard T. Cullen, the executive director of Connect Americans Now, a group that aims to close the digital divide, commended the president for bringing up the issue during his State of the Union speech.

“While progress has been made, there is still much more the White House and policymakers in Washington can do to close the broadband gap for millions of Americans living in unserved and underserved rural areas,” Cullen said in a statement. “In particular, Connect Americans Now encourages policymakers in Washington to ensure funding mechanisms remain technology neutral, support additional solutions to improve the mapping of the digital divide and prioritize solutions to enhance the pace and scale of deployments in rural areas by maximizing the benefit of available spectrum.”

This isn’t the first time Trump has brought up the digital divide—and the issue has been a hot topic for 2020 Democrats on the campaign trail.

Earlier this year, the Trump administration released a report from the American Broadband Initiative (ABI)–calling it a “significant step forward toward delivering the modern broadband infrastructure that all Americans deserve” but adding “a lot of work remains to be done.”

The report outlined ways to speed up the process of providing high-speed internet to underserved or unserved areas. The report called for the government to spend hundreds of millions of dollars to “catalyze increased private-sector investment in broadband infrastructure;” and making it easier for network builders to access federal land and buildings, among other things.

The president also called for increasing high-speed internet access in 2017 and signed an executive order that made it easier for companies to install networks in rural areas in 2018. As Politico notes, a 2016 infrastructure plan that failed to get through Congress also included increased broadband access.

However, as Free Press has noted, there are several issues at play that contribute to the digital divide including: affordability and racial discrimination–something experts brought up during a House of Representatives hearing about the issue earlier this month.

The Republican-led Federal Communications Commission (FCC), led by the Trump-appointed Ajit Pai, recently announced a $20 billion rural digital opportunity fund. However, Democratic members of the Commission have criticized the plan as it relies on broadband maps that have been called flawed.

“With today’s decision we commit the vast majority of universal service funds—$16 billion!—for the next ten years without first doing anything to improve our maps, survey service accurately, or fix the data disaster we have about the state of service today,” FCC Commissioner Jessica Rosenworcel wrote when the fund was announced. “That means if your home is marked as served by the FCC’s maps today and it is not, then for the next decade you are on your own. Good luck. It means millions of Americans… will slip deeper into the digital divide.”

The goal of bridging the digital divide is shared across the aisle.

Many candidates seeking the Democratic party’s nomination for president in the 2020 election think they can deliver on closing the digital divide better than Trump’s administration.

Sen. Bernie Sanders (I-Vt.) has called for treating the internet like a public utility, adding that it should be seen as a “basic human right.” As part of his plan, the Vermont senator said he wanted to have every household in the country connected to “high-speed internet by the end of his first term.”

Similarly, Sen. Amy Klobuchar (D-Minn.) has said, if elected, she wants to connect every U.S. household to broadband internet by 2022.

Former New York City Mayor Michael Bloomberg has a less aggressive plan than others. Last month he called for connecting 10 million more Americans by 2025 and everyone by 2030.

Several 2020 candidates have also called for allowing municipalities or states to build their own broadband networks, a move that some experts believe could help bridge the digital divide.