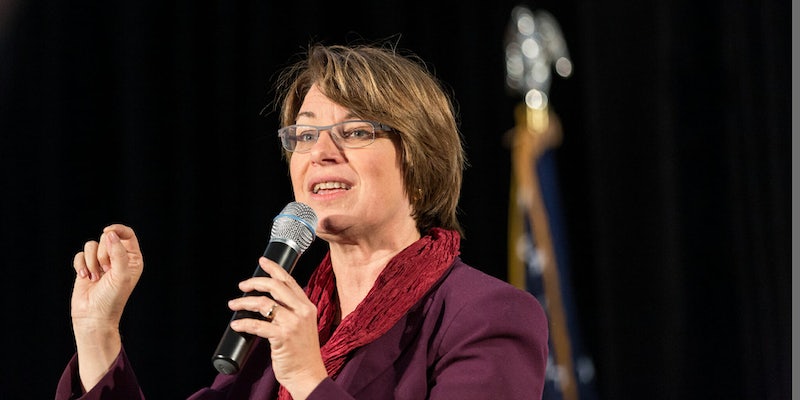 She announced a plan on Thursday to have broadband in all American households by 2022.

Sen. Amy Klobuchar (D-Minn.) continued to highlight the internet as part of her 2020 Democratic primary campaign on Thursday, when she announced her plan to have every household in the country connected to broadband by 2022.

The Minnesota senator announced her plan in a blog post on Thursday where she outlined a trillion-dollar plan to fix the country’s infrastructure. Among the plans to replace roads, bridges, highways, airports, public transit, and ports, Klobuchar said she planned to have every American home connected to broadband internet by 2022.

“Roughly one in four rural Americans say access to high-speed internet is a major problem. That’s why as President, Amy will connect every household in America to the internet by 2022,” the blog post reads. “Amy’s plan will help close the urban-rural divide by creating accurate broadband maps to identify areas that lack adequate access, focus on bringing high-speed internet infrastructure to areas most in need, and provide greater incentives for existing providers to use funds to upgrade their networks to cover unserved and underserved areas.”

This isn’t the first time Klobuchar has focused on the internet as part of her campaign to become the Democratic 2020 nominee to square off against President Donald Trump.

During her campaign kick-off speech, the Minnesota senator said she wanted to “guarantee” net neutrality for all Americans.

The speech touched on a number of technology-centric issues, including net neutrality and cybersecurity.

“For too long the big tech companies have been telling you, don’t worry, we’ve got your back,” she said at the time. “While your identities, in fact, are being stolen and your data is being mined. Our laws need to be as sophisticated as the people who are breaking them. We must revamp our nation’s cybersecurity and guarantee net neutrality for all. And we need to end the digital divide by pledging to connect every household to the internet by 2022, and that means you, rural America.”