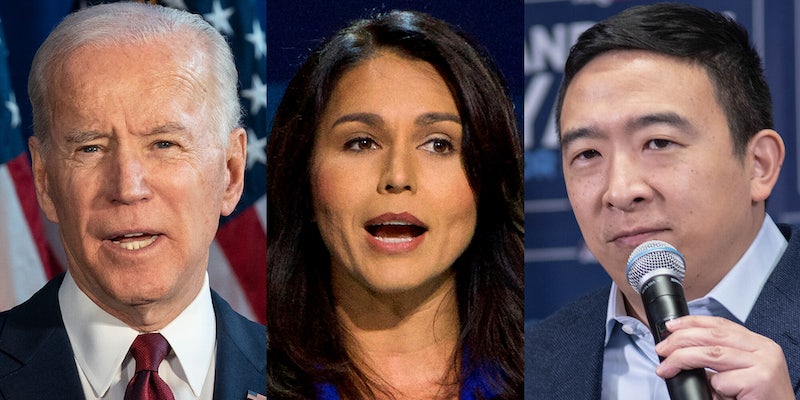 Some of the 2020 Democrats have strong opinions about it.

Technology has been a hotly debated issue among Democrats vying for their party’s nomination for president this year.

A number of candidates have called for breaking up major tech giants like Amazon and Google, while others have called for increased investment in broadband or restoring net neutrality rules.

But recently, the idea of tweaking—or even revoking—Section 230 of the Communications Decency Act has also come up.

In mid-January, former Vice President Joe Biden said that the law should be “immediately” revoked. But Biden isn’t the only one who has brought up the idea.

House Speaker Nancy Pelosi (D-Calif.) said last year that the section was a “gift” to tech giants and that they were not “treating it with the respect that it deserves.”

Sen. Josh Hawley (R-Mo.) has also introduced a bill that would amend Section 230 by making the Federal Trade Commission (FTC) certify that tech companies are being neutral in moderation, specifically regarding political bias.

Meanwhile, Attorney General William Barr said in December that the Department of Justice was “thinking critically” about Section 230. The DOJ is also inviting people to a workshop on the issue next month, according to the Information.

However, the idea of repealing Section 230 has been fiercely criticized. The Electronic Frontier Foundation has called the section “one of the most valuable tools for protecting freedom of expression and innovation on the internet.”

Section 230 of the Communications Decency Act, which was passed in 1996, essentially protects websites from being liable for what is posted on them by third parties.

The law is obviously important for social media companies, but websites that have comment sections also rely on it.

Specifically, the section says that: “no provider or user of an interactive computer service shall be treated as the publisher or speaker of any information provided by another information content provider” provides blanket protection.

Here is what some of the 2020 Democrats have said about Section 230. This post will be updated if more candidates speak about it.

Biden continued to describe his reasoning, in the context of Facebook:

“It should be revoked because it is not merely an internet company. It is propagating falsehoods they know to be false, and we should be setting standards not unlike the Europeans are doing relative to privacy. You guys still have editors. I’m sitting with them. Not a joke,” Biden told the editorial board. “There is no editorial impact at all on Facebook. None. None whatsoever. It’s irresponsible. It’s totally irresponsible.”

In the past, Biden said “we should be considering taking away” the protections, according to Politico.

Within the plan, Yang said he would “Amend the Communications Decency Act to reflect the reality of the 21st century—that large tech companies are using tools to act as publishers without any of the responsibility.”

In March, Sen. Amy Klobuchar (D-Minn.) spoke with Recode at South by Southwest where she said wanted to “look at how we can create more accountability” when asked about Section 230.

“We do not want to destroy these companies, right? But what we want to do is to put more accountability in place and we have been failing at that effort, and that’s why we need all of your help to get to a better place,” the Minnesota senator said.

Sen. Bernie Sanders (I-Vt.) seemed to imply in a statement to Vox that Section 230 needed some revisions, specifically regarding platforms when they “knowingly allow content… that promotes and facilities violence.”

“Section 230 was written well before the current era of online communities, expression, and technological development, so [I] will work with experts and advocates to ensure that these large, profitable corporations are held responsible when dangerous activity occurs on their watch, while protecting the fundamental right of free speech in this country and making sure right-wing groups don’t abuse regulation to advance their agenda,” he told the news outlet.

Former New York City Mayor Michael Bloomberg told the Mercury News in mid-January that he was open to “more limited antitrust enforcement” when talking about breaking up large tech companies.

Bloomberg is in favor of reviewing Section 230 and is expected to release a technology proposal in the coming weeks, a campaign spokesperson told the Daily Dot.

In late January, Gabbard told Politico this week that “in the coming days” she will be introducing legislation that “amends Section 230 of the Communications Decency Act by eliminating big tech’s immunity and ensuring accountability.”

In November, Gabbard’s campaign spokesperson hinted at her bill when talking with Politico, saying that she would “remove the protection from liability that some Big Tech platforms have.”

The spokesperson added “they should not have special protections if they allow false, defamatory, libelous articles or advertisements,” if they are “acting as publishers.”

Sen. Michael Bennet (D-Colo.) told Vox that it was time to “revisit” Section 230, adding that it “may have made sense in the earliest years of the internet, but it makes little sense for a time when tech companies are some of the wealthiest and most powerful on the planet.”