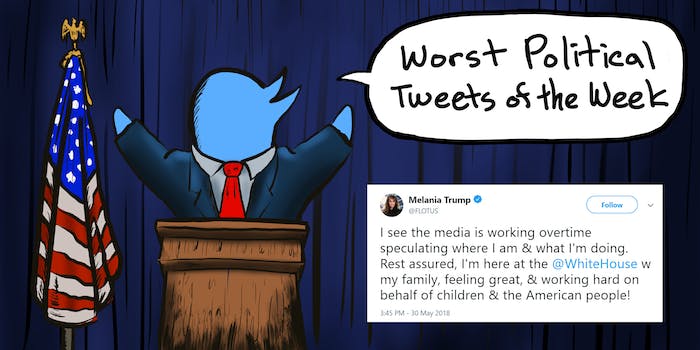 The worst political tweets of the week: May 26 – June 2

It was a punishing week of bad tweets from the Hill: The odd Melania Trump tweet, an extremely large Rep. Devin Nunes (R-Calif.) campaign sign, and—yep, you guessed it—another bad tweet from the president.

Here are the worst political tweets of the week, broken down by the Daily Dot’s politics team, Andrew Wyrich (AW) and Ellen Ioanes (EI).

Worst political tweets of the week

1) Another online boycott doomed to fail

EI: You can tell so much about someone just by seeing the American flag emoji in their Twitter handle.

AW: Oh yeah, and there’s usually like three more in the bio.

EI: The number of American flag emoji is directly proportional to how unhinged the user is.

AW: But honestly, do these #Boycott[InsertThingHere] campaigns ever come close to working?

EI: Do you remember when the Southern Baptist Convention wanted to boycott Disney because ABC supported Ellen DeGeneres?

AW: No. But this was an interesting moment: The #BoycottABC hashtag flipped from liberal outrage to conservative backlash in a matter of hours as ABC pulled the plug on Roseanne.

AW: Where can I get one of these, Ellen?

EI: I’m sure Devin Nunes will be happy to supply you one, as soon as he’s finished writing his memos.

AW: I know this is low-hanging fruit, but how could this not be on the list?

EI: Seriously. Where is Melania, folks? Leashed to her desk in the East Wing? Or on vacation with Baron far, far away?

AW: I hope on vacation. But I guess we’ll see. It’s been a while since her last public appearance.

EI: 20-plus days. Maybe she’s just busy helping kids not be bullied on the internet.

4) ‘Double standard’ is the standard argument these days

AW: The “double standard” argument has become blanket across conservative punditry since the Samantha Bee thing. It’s everywhere. Even the president couldn’t resist joining the fray.

EI: Maybe a new record for him? I can’t believe we have a president who doesn’t understand capitalization. I feel like that’s something you learn in grade school.

AW: WhAt Are yOu tAlkinG aBouT, ElleN?

EI: This is what’s happening in my brain every time I read one of his tweets: