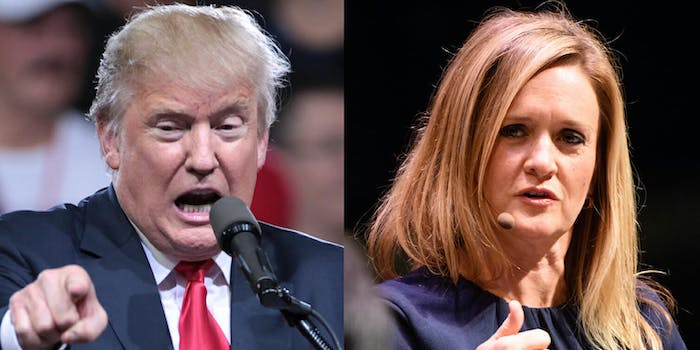 Trump has some thoughts.

President Donald Trump seems to be joining a chorus of conservatives who believe comedian Samantha Bee should be fired after she used colorful language to describe Ivanka Trump during her show on Wednesday night.

Trump tweeted there was a “total double standard” on Friday morning—presumably referring to Roseanne Barr‘s show being cancelled for her using racist language to describe a former aide to Barack Obama—and added a number of the usual insults he flings at those he disagrees with including “low ratings” and “no talent.”

“Why aren’t they firing no talent Samantha Bee for the horrible language used on her low ratings show? A total double standard but that’s O.K., we are Winning, and will be doing so for a long time to come!” the president tweeted.

Why aren’t they firing no talent Samantha Bee for the horrible language used on her low ratings show? A total double standard but that’s O.K., we are Winning, and will be doing so for a long time to come!

Bee apologized for calling the president’s daughter a “feckless cunt” in reference to her posting a photo of herself hugging her child while ICE agents have been separating parents from their children.

“I would like to sincerely apologize to Ivanka Trump and to my viewers for using an expletive on my show to describe her last night. It was inappropriate and inexcusable. I crossed a line, and I deeply regret it,” the comedian wrote on Twitter.

Trump’s lashing out against Bee came just hours after White House Press Secretary Sarah Huckabee Sanders all but called for TBS to cancel the show, adding that the word was “vile and vicious.”

“Her disgusting comments and show are not fit for broadcast, and executives at Time Warner and TBS must demonstrate that such explicit profanity about female members of this administration will not be condoned on its network,” Sanders said, according to reports.

The White House has no authority to call for someone to be fired from a television show, however the president’s tweets show they could be attempting to create public pressure to fire her.