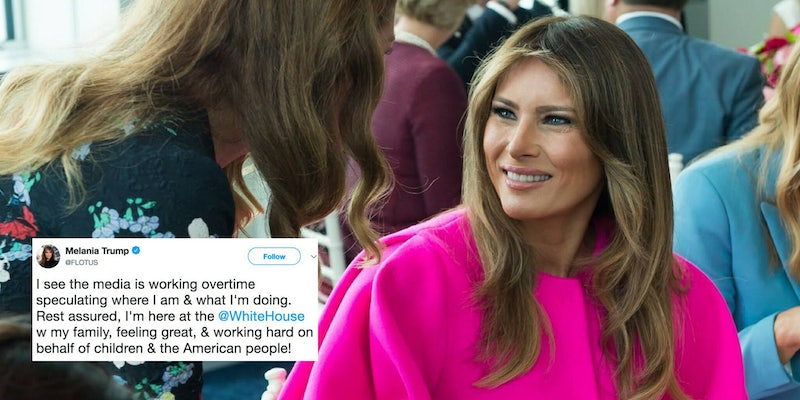 Those 'blink twice for help' protest posters would come in handy right about now.

On the day of the first-ever Women’s March in 2017, resisters of Donald Trump’s presidency busted out their best signs telling the then-future First Lady Melania Trump to “blink twice” if she needed to secretly convey that she was being held hostage by her husband, the then-president elect.

Now, it appears this obvious joke about Melania’s limited autonomy has become somewhat of a real concern, particularly after the first lady tweeted out an eerily familiar account dismissing her public absence.

“I see the media is working overtime speculating where I am and what I’m doing. Rest assured, I’m here at the White House with my family, feeling great, and working hard on behalf of children and the American people!” Trump’s account tweeted on Wednesday afternoon.

I see the media is working overtime speculating where I am & what I'm doing. Rest assured, I'm here at the @WhiteHouse w my family, feeling great, & working hard on behalf of children & the American people!

Sure, the context of Melania’s tweet might make her response appear innocent and understandable—Melania was last seen 20 days ago, when she accompanied the president during the return of three American hostages of North Korea. Days later, she was checked into the hospital for kidney problems and stayed for a week despite the typical recovery taking a day. And yes, the media did want to know where in the world the Carmen Sandiego of the White House had gone off to. If not avoiding her husband at the “winter White House” in Florida, or from the top stories of Trump Tower in Manhattan, then where could she be?

However, none of that seemed to matter to those reading Melania’s dismissive tweet. It was the content of her statement that caught the attention of would-be Trump tweet experts, who clearly saw through this attempt to quell rumors of Trump’s disappearance and into the heart of who was actually behind this laughable media response.

As HuffPost’s Ashley Feinberg, the internet detective who cracked former FBI Director James Comey’s Twitter account, pointed out, the tweet echoed the president’s most-prevalent criticism of the media, as well as several of his favorite empty yet patriotism-bolstering go-to phrases: “the media is working overtime,” “working hard,” and “on behalf of the American people.”

The first lady’s tweet practically read like a ransom note-esque splicing of the president’s greatest hits. Other Twitter users were quick to make the connection, too.

There is a 0.00000% chance Melania wrote this tweet.
Weird grammar and syntax? Exclamation marks?
Sounds familiar. I can't quite put my tiny orange finger on it.https://t.co/TEbG2hsKvT

Please rest assured my Twitter account has been taken over by a White House aide while I get my paperwork in order and my boxes packed.

Melanie (get it? because my "husband" doesn't know my name). #BeAnythingButMarriedToDonald

Blink twice if he has your phone. https://t.co/n7MB8ajN8b

Others didn’t conclude that the president was definitively behind the first lady’s tweet, but agreed that Trump definitely didn’t type such a statement. At least, not willingly.

There's no way she wrote this. Something eerie is going on. She hasn't been seen in 20 days. Her kidney situation was never really explained. #WhereIsMelania? https://t.co/yyVikH8Qcj

I can tell Melania didn't write this because it sounds nothing like Michelle Obama https://t.co/AAkRG1q801

love that the single most consistent thing about Melania Trump is the thought "Melania Trump definitely did not write this" https://t.co/KjSnEA4pMU

this is exactly what a hostage would tweet https://t.co/XnZzOpoJL3

"Trust me, Melania, the person tweeting this." https://t.co/0OzyWvHiCR

Donald has communicated in the past under the pseudonyms John Barron, John Miller, and David Dennison.

And some spectators weren’t so sure the tweet meant Trump was “safe” after all.

It’s safe to say that an image of Melania holding today’s newspaper as proof that she still exists would comfort the “children & American people” she’s “working” for. Instead of, you know, that modern-day drivel encouraging the internet to not look at the man behind the green (or orange?) curtain.

#WhereIsMelania, folks? Get it trending.