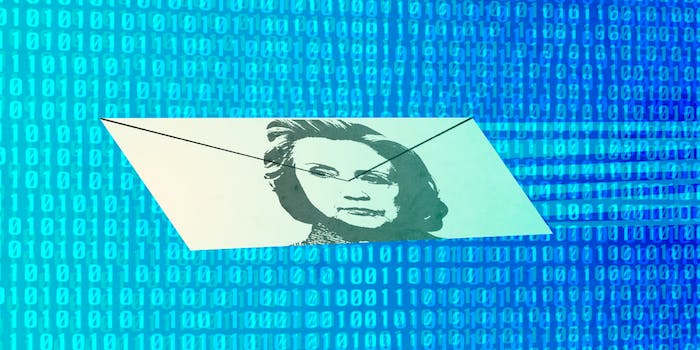 The whistleblower website says the emails could be damning.

On Monday, WikiLeaks published 1,258 emails related to the Iraq War that passed through Hillary Clinton‘s private email server while she was secretary of state.

WikiLeaks, a website that rose to prominence by publishing classified or otherwise secret documents obtained through anonymous sources, tweeted a link to the released information using the hashtag #Chilcot, which refers to the British government’s long-awaited inquiry, led by Sir John Chilcot, into the United Kingdom’s involvement in the Iraq War.

Ahead of the #Chilcot report: 1258 Hillary Clinton emails on #Iraq https://t.co/HNnujrB20o

The emails were released by the State Department as a result of requests filed under the Freedom of Information Act.

The release follows after WikiLeaks founder Julian Assange said in an interview with London-based ITV that his organization had obtained enough proof for the Federal Bureau of Investigation to indict Clinton .

Assange on Hillary Clinton two weeks ago: FBI+DoJ have evidence to indict and should indict but will not https://t.co/8gxHYphtkL

Through a set of tweets, WikiLeaks highlighted certain emails in which Clinton, now the presumptive Democratic nominee, orders her staff to improperly handle classified data.

On Tuesday, FBI Director James Comey announced that investigators would recommend the Department of Justice bring no charges against Clinton or her staff for mishandling the classified information, while also calling their conduct “extremely careless.”