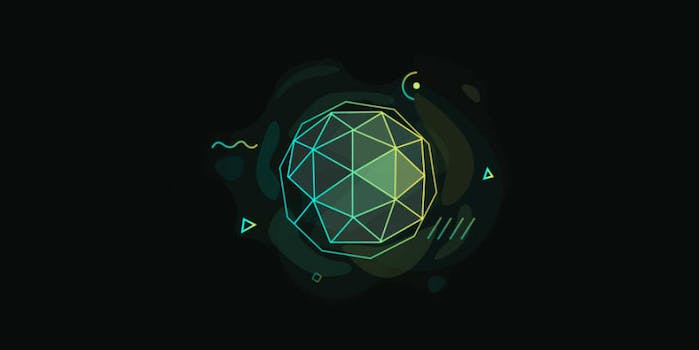 Why critics are skeptical of TRON, the buzzworthy cryptocurrency

TRON is getting another reboot.

TRON is being rebooted again—only this time it’s in the world of cryptocurrency. While it’s not another sci-fi epic, the vision behind the company is equally grand, and it could have major implications for the YouTube stars of the future. That is, assuming it’s real.

If you’re thinking about investing in TRON, here’s everything you need to know, and why critics are skeptical.

In simpler terms, that basically means that digital media “creators” who use TRON will have total ownership and control over the data they create, including distribution. By cutting out middle parties, like the Apple Store and Amazon, creators can theoretically control access to their content and avoid the fees those companies charge.

TRX, not to be confused with the gym contraption, is the coin used for exchanges in this digital ecosystem. The benefit to YouTubers and others is that TRX can be easily exchanged to local currencies, making it ideal for international creators.

The TRON Foundation was created in 2017 by Justin Sun, a self-proclaimed protegé of Alibaba CEO and billionaire, Jack Ma. Sun, who once appeared in Forbes’ 30 Under 30 In Asia, also worked for Ripple before branching out to create his own blockchain platform.

Between December 2017 and early 2018, TRON and TRX were seemingly killing it. At the beginning of December, TRX was priced at $0.0020. But in the middle of the month, the coin surged to $0.29, briefly making it the sixth-biggest cryptocurrency in the world. It was around this time that the disgraced godfather of antivirus software, John McAfee, began promoting the coin in a series of tweets.

Tron is a long term Hodl. Those who are flipping it are losing out.

In the last weeks of 2017 and into January, Sun began hinting at a partnership between the Chinese e-commerce giant Alibaba and TRON by boasting every time a former Alibaba developer was hired on Twitter. No partnership has been formally announced. The TRON CEO also announced that TRON would be collaborating with Baofeng, aka “Chinese Netflix,” and noted its “200 million users.”

We #TRON are proud to announce the partnership with Baofeng group. Baofeng, aka Chinese @netflix, boasts more than 200 million users as a video portal giant and has achieved 8 billion CNY listing in Shenzhen stock exchange (300431.SZ). https://t.co/f9MJZcmSDD #TRX $trx pic.twitter.com/jZJF32mmvi

Crypto sleuths, mostly on Reddit, were quick to point out that this tweet announcement was at best, misleading, as the partnership was actually with a new blockchain division within Baofeng, called the BCN (Blockchain Consensus Network.) The “200 million users” Sun wrote about are actually for Baofeng’s video playback service, not the BCN.

To make matters worse, TRON was already dealing with another scandal at this time: People began noticing plagiarized elements in the platform’s white paper (the pitch document explaining the technology and investment information behind the coin). Apparently, many similarities to alt currency, Filecoin closely mirrored the English version of Tron’s. Justin Sun took to Twitter to defend the paper, blaming these errors on translation issues.

.@justinsuntron why does your TRON whitepaper make wholesale copying of @IPFSbot and @MineFilecoin without a single reference? Bitswap, PoRep, PoSt, these are not your ideas?

Our original version of the whitepaper is in Chinese and we have a very detailed reference to the latest Chinese version. The English, Korea, Japanese and Spanish versions are translated by the volunteers. The translation missed numerous important details not just reference.

Other PR nightmares followed, and it was still only the second week in January. Sun had to defend rumors that he had cashed out his 6 billion TRX coins after a wallet was found potentially linking transactions to his name. Sun claimed that another early investor shared his name, and the wallet was purely a coincidence.

That’s when the name calling and questions of legitimacy began. “Vaporware” is the term used to describe crypto startups who have no proven use or technology to backup their claims. TRON was labeled Vaporware by crypto news sites like Bitcoin.com and TrustNodes, which called Sun’s platform, “The $14 Billion White Paper with No Product.” On Jan. 12, an opinion piece in the Washington Post dragged TRON as the “cryptocurrency that’s valued at over $7 billion even though it doesn’t actually exist. It’s just a white paper filled with a bunch of buzzwords.” Ouch.

One of the most positive announcements to come from Sun’s Twitter in the last month has been the launch of TronDogs, a cryptocurrency game where you buy, trade, and breed digital dogs using TRX coins. It’s basically Pokemon meets GigaPets: Collecting “rare” dogs is the objective, but if you don’t “look after them,” they die. One critic on Twitter called the game “the cleverest coin burn ever.” Coin burning is a tactic used by cryptocurrencies to drive down circulation and create a limited supply. In this case, every time a TronDog “dies,” 20-2000 TRX go out of circulation. Woof. 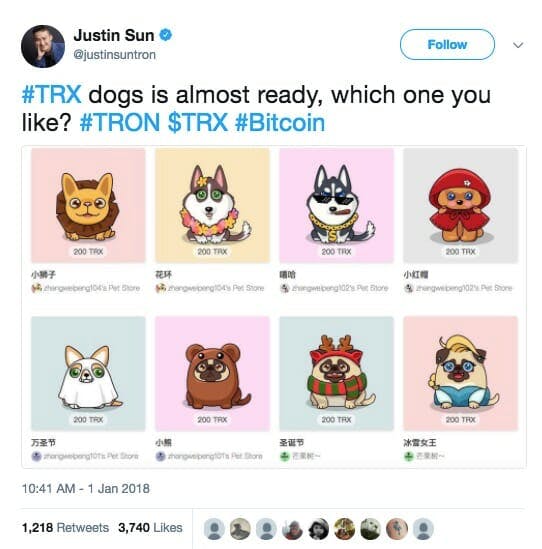 TRON: Legacy (or how to buy TRON)

As of this writing, TRON experienced a short-lived uptick, with headlines declaring that TRX is “Too Good For Investors to Resist.” Still, I would be wary of the many, many scandals plaguing this coin. But, if you’re looking to buy a 200TRX digital pug puppy wearing a pumpkin on its head, you’ll have to buy some TRX. No promises it won’t die.

The easiest way to buy TRX is on Binance, but you’ll have to buy another cryptocurrency (like Bitcoin) first before exchanging it for TRX. You’ll have to go through all the usual methods: creating a username, adding ID and banking info, waiting for your bank transfer, and buying coins. For a more detailed write up of how to buy cryptocurrency, check out our guide here.