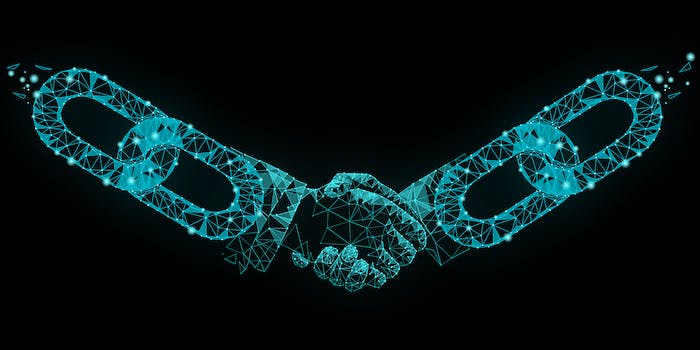 Unlocking blockchain, the tech behind the Bitcoin revolution

To understand it, you need to first know the basics of cryptography.

If you’ve read anything about Bitcoin in the last few weeks, you’ve likely heard the term “blockchain.” The technology has applications that extend far beyond its connections to cryptocurrency and diving into it head first can be dizzying. The technology has been around for over 25 years, so there are tons of ways to break down the nerd speak into something everyone can get on board with.

To understand blockchain, you have to first understand cryptography. An easy way to remember encryption is to think of the classic “decoder ring” kids toy found in (our parents?) cereals. With a decoder ring, every letter in our alphabet corresponds to a number determined by a key. If you don’t have the key, you can’t “crack” the message. Modern encryption essentially uses computerized “decoder rings” to create codes that lock data and files.

But what about situations where you’d like to encrypt files and keep them secure but still have a way to be accessed by large groups with security clearance? Or what about an end to phishing, credit card fraud, and identity theft that happens when two parties exchange data, goods, or services?

On the internet, data can be copied, modified, remixed, edited, and screenshotted without our control. It’s the beautiful and sometimes infuriating nature of the internet. Blockchain technology is the strongest defense to ensure our data, files, or money can be transferred securely.

You may hear that blockchain is “decentralized” or “distributed.” These terms highlight one of the most unique benefits of the technology: Blockchain removes the middleman in transactions. A centralized transaction system runs everything through an intermediary institution (like a bank, store, or company) to maintain the ledger. When blockchain is decentralized, the ledgers are publicly accessible. When it is “distributed,” access can be shared between two trusted parties.

Blockchain is a network of computers (called nodes) that all have the same history of transactions, validated by every new computer that wants to be part of the transaction. Cryptography (remember 1950s decoder rings?) makes sure the transaction is secure by encoding each transaction with a unique set of numbers and letters, verified by all parties in the transaction.

This history, or database of records, is called a block. Each block contains information about the history of each block before it, down to the second, and chains it to the block before it. Instead of a bank or company helping to make these records verifiable and possible (like making sure a check doesn’t bounce), software code becomes the middleman, and it takes nanoseconds to verify the transaction. Additionally, nothing can be altered, erased, remixed, or edited on the blockchain. Just like these ledgers from Mesopotamia, the blockchain’s history is set in stone.

In practical terms: Say I have .03 bitcoin and I’m dead set on spending them on these Gucci loafers (size 7, fyi). I would then connect to the decentralized Bitcoin blockchain, and send my request to transfer that .03 BTC to Gucci. This transaction is transmitted to the system, and every single node on Bitcoin’s system can see it. But my identity, and Gucci’s identity are displayed as temporary cryptographic signatures. At this point, I can also see the selling history of these shoes and any previous owners of them. The nodes verify this request, and my bitcoins are transferred to Gucci. This is recorded as the last block on the chain. Once everything is recorded, sealed cryptographically, and finished, I get my loafers, and the chain records me as the current owner of those shoes.

In a way, blockchain technology is getting us back to the basic roots of trading and one-one-one transactions that built the modern economy. In early fur trading, for instance, the ledger was recorded by each party, or by a written contract, not a bank. And fur traders didn’t need to wait five to 10 business days for their trades to come through. But as trade became more global and large-scale, institutions became necessary to manage our trades and lower our risks and uncertainty when doing business with merchants in far-off lands. Now, in a globalized society, a globalized system for making these transactions is needed.

Sure, in The Revenant times, there were bandits and charlatans, just like today’s hackers and identity thieves. But governments are already working with blockchain technology so that personal data can be stored on the chain. That, along with the use of personal cryptographic signatures, will further secure data transactions.