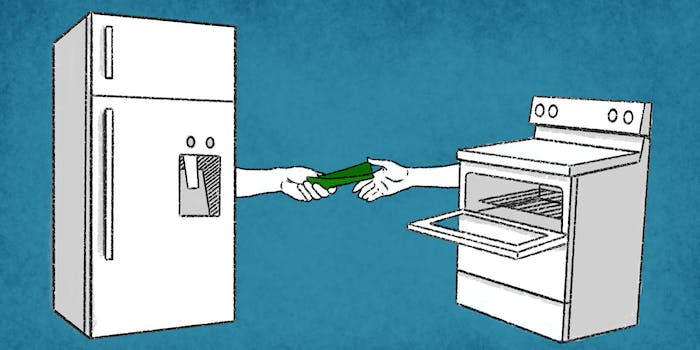 Why IOTA could be the next Bitcoin

IOTA could become the standardized currency of the so-called Internet of Things.

By now, you’ve probably reached your limit on conversations about Bitcoin. You’ve already seen every comedian on Twitter share their hot take. You watched the Big Bang Theory explainer episode. You’ve even shaken your fist at the sky wishing you’d invested back when it was $10 a pop.

But while you were debating getting a broker to advise you on Bitcoin futures, another cryptocurrency was quietly exploding in the background. Last month IOTA was valued at $.35 per coin and had a market valuation of less than a billion dollars. Less than two weeks later, after surging well over 900 percent, an IOTA is worth over $4 and has a total market capitalization of $13 billion.

If you’ve burned by investing in alt-currencies that are even more volatile than Bitcoin, it’s understandable you’re done hearing about the “next big coin.” But IOTA is low-key awesome, and brands like Samsung Artik have already voiced their support.

Here’s everything you need to know about IOTA.

First, let’s clear up one common misconception: IOTA is not an acronym. As co-founder Dominik Schiener explained in an October 2017 meetup, IOTA takes its name from the Greek alphabet (it’s the ninth letter), and it stands for the smallest possible unit. “Our big vision with IOTA is to enable those micropayments,” Schiener said.

To understand IOTA, you need to understand the Internet of Things, or IoT. IoT refers to the network of internet-connected physical objects able to collect and exchange data using embedded sensors. Computers, microchips, kitchen appliances, hospital devices and cars are all part of IoT. IOTA, the cryptocurrency, accurately refers to itself as “the backbone of IoT.” IOTA wants to become the standardized ledger of IoT, which supporters of IOTA call “the Ledger of Everything.”

To simplify: The Internet of Things is every object with an internet connection. By the transitive property, IOTA has the capability of being the standardized currency of those things. This is often referred to as the machine-to-machine economy or (m2m). Yes, in the near future, your solar panel may be contacting your neighbor’s light bulbs to “sell” its own energy (hopefully in IOTAs) without you even getting involved. It’s Wall Street meets iRobot. Sounds crazy, right?

How does IOTA work?

What makes IOTA special is that, unlike Bitcoin, it does not need to be “mined” because it is totally decentralized and blockless. This means that anyone can make transactions on the network for free, without fees. There’s also no fixed limit on how many transactions can be confirmed per second.

Removing the traditional blockchain design has allowed IOTA to work on a platform called Tangle, which uses a mathematical concept known as Directed Acyclic Graphs (DAG). You won’t be quizzed on this, I promise. What you need to know about DAG Tangle is that it works by approving two previous transactions in other IOTA wallets (nodes) in order to make its own transaction valid. By removing miners and middlemen, this makes buying and selling extremely fast. And with IOTA, the more users it has, the faster and bigger the network is.

Sounds weird and cool. How do I buy IOTA?

The simplest way to buy IOTA is to buy Bitcoin or Ethereum (another cryptocurrency) on a site like Coinbase and transfer it to an exchange that supports IOTA. According to CoinMarketCap.com, there are currently 13 places you can trade IOTA online. If you’re in the U.S., Binance is your best option; for citizens outside the States, Bitfinex works great.

IOTA has some lofty goals, and it may be awhile before machines need money and sensors can autonomously purchase things. Since this technology is so new, flaws in its protocol are already being discovered, such as this one involving Tangle’s vulnerability found by the Digital Cryptocurrency Initiative at MIT’s Media Lab. (It’s since been fixed.) Another foreseeable roadblock: Online retailers could very well be in the process of creating their own cryptocurrencies or tech for m2m transactions. This could stymie IOTA’s growing popularity. Just this month, Amazon bought up crypto URLs, leading many to speculate that nano transactions may be in the brand’s future.

Is IOTA the next Bitcoin?

As of this writing, IOTA has skyrocketed to be the fourth-largest cryptocurrency in the world, largely due to the corporate participants that were announced last month. Microsoft and Fujitsu, among others, have signed up for Data Marketplace, a two-month pilot program created by the IOTA Foundation. By using IOTA’s technology to share data, these companies will get a taste of what the Internet of Things can do for them. The network of these partnerships is expected to raise IOTA’s profile and hopefully, encourage other brands to deepen their pockets and open up their minds to the IoT.

These high-end collaborations have given IOTA quite the entrance to the mainstream. But it’s worth waiting to see how these pilot programs turn out in 2018. For the ultra-conservative investor, this may also mean waiting until m2m technology is actually implemented.

So do your research, wait it out, and hope for the best. This time next year, maybe you’ll be complaining that my Kindle sold your Keurig a dictionary.

Correction: The value of IOTA surged over 900 percent. As of Dec. 19, IOTA is valued at $5.35 U.S. This article has also been updated to clarify Microsoft’s involvement with IOTA as well as the meaning of the term “IOTA.” Contrary to a previous report, Cisco is not participating in the data marketplace.