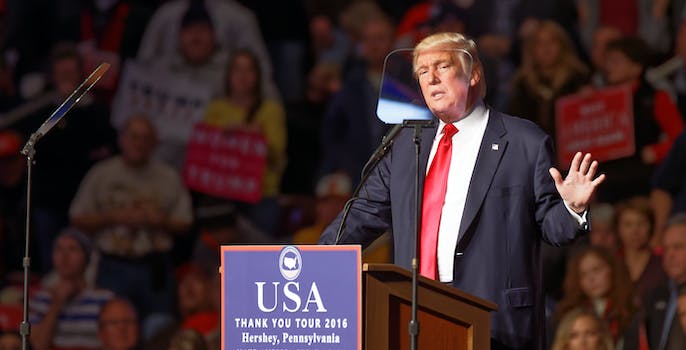 'Thank you to the African-American community.'

President-elect Donald Trump on Thursday called on a crowd of supporters to applaud African-American voters who didn’t vote for Clinton in the 2016 election.

At a rally in Hershey, Pennsylvania, which featured a mostly white crowd, Trump directed his rally-goers to cheer for “smart” African-Americans who did not vote for Hillary Clinton on Election Day.

“Thank you to the Hispanic community,” he added.

The comments echo those Trump delivered last week at a rally in Grand Rapids, Michigan, where the president-elect told supporters that African-American community had served his campaign by not voting.

“The African-American community was great to us,” Trump said. “They came through, big league. Big league. And frankly if they had any doubt, they didn’t vote, and that was almost as good because a lot of people didn’t show up, because they felt good about me.”

In Hershey, Trump also said his supporters acted “like wild beasts” before the election in their determination to win. “They’re screaming ‘jail, jail, prison,’ right? They’re going crazy,” he said to laughs and cheers from the crowd. “And now, the crowds are amazing,” he added, commenting on the size of his crowds even after an exhausting election cycle.

Trump later on Thursday night returned to Twitter, where he bashed the press—stirring resentment toward the media, whom he called the “world’s most dishonest people on Thursday, is also a staple of his “thank you” rallies—implying the attention being paid to his several conflicts of interest is somehow unwarranted. “The media tries so hard to make my move to the White House, as it pertains to my business, so complex—when actually it isn’t!” wrote Trump.