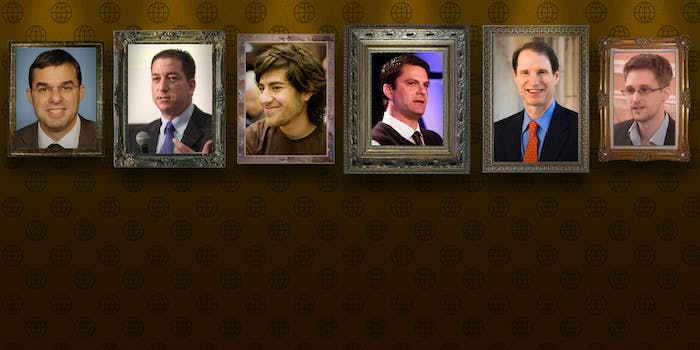 The 10 most influential Internet freedom activists of 2013

It’s not just 2013. Decades from now, we’ll still be looking at an entire age of Internet freedom as two separate eras: Before Edward Snowden blew the whistle on U.S. government surveillance in June, and after. Snowden, a former National Security Agency contractor, leaked a trove of agency documents, proving it tracks practically everyone with a phone and that it can nearly anything on the Internet.

It’s clear from this list that the biggest issues in Internet freedom stem from the revelation that the NSA, and partner agencies around the world, have incredible power, and go to incredible lengths, to spy on the Internet. As such, this year’s list highlights not just Snowden, but those who saw his revelations and decided to fight for change.

That said, while 2013 saw no equivalent to last year’s Stop Online Piracy Act—a singular threat stopped by a coalition of millions of Internet users—it also saw huge efforts from activists who fought not just the NSA, but other laws and international agreements that threaten the Internet’s freedom.

These are 2013’s 10 most significant Internet freedom fighters.

It’s entirely possible that Snowden, who will never again have the kind of access he had when he worked as a contractor for the National Security Agency, will still be on this list next year, as we’ve reportedly only scratched the surface of his leaks. People sometimes claim that they already figured the NSA had the ability to spy on the entire world before Snowden came along, before he leaked a nearly unfathomable trove of agency documents that detail agency programs. That’s about as meaningful a statement as claiming someone knew we could split the atom before Oppenheimer, seeing as they assumed science would always find a smaller unit to measure.

It’s purely through Snowden’s methodical, incredibly risky decision to single-handedly plot against the most powerful intelligence agency in the history of the world that we can view primary documents of countless agency programs. And it’s only because we can view those documents that we’re seeing the seeds of real change in how the world’s governments view individual privacy in the digital age. Not to mention the price he paid: he’s currently living out a one-year asylum in Russia, and would likely only return to his native U.S. in handcuffs.

To look at Aaron Swartz‘s story with a tragically poetic lens, he died a victim of the so-called “worst law in technology,” the Computer Fraud and Abuse Act. An ever-more-controversial law, the CFAA ramps up the punishment for anyone who does anything remotely illegal with a computer, as if the Internet were inherently a criminal accessory.

Before 2013, Swartz already had a remarkable résumé—he helped create Reddit, Creative Commons, and the activist group Demand Progress—when, like a Robin Hood of the WikiLeaks age, he hacked into MIT’s JSTOR database of academic journals, intent on making that information free for the world to see. For that, Swartz faced a whopping 35 years in prison and a quarter million in fines. Unable to deal with his trial, he hanged himself in his Brooklyn apartment January at the age of 26. There are plenty of people charged under the CFAA who have full activist support, but no one gave more, or was charged for more noble a cause, than Swartz.

Once he passed his trove of documents to a handful of journalists, Snowden was resigned to building a new life in Russia from practically nothing, a fugitive from his home country. But travelling to Hong Kong to acquire those documents directly from the former NSA contractor was “the moment of a lifetime” for friends Greenwald and Poitras, a journalist and documentarian, respectively.

Greenwald, especially, then embarked on a career-defining stint, publishing story after story at the Guardian, his then-employer, passing on other documents to outlets like the Washington Post and New York Times, and helping foreign papers tell their own countries’ NSA stories. Though neither had to literally apply for asylum like Snowden, both find their storytelling better suited to living abroad: Greenwald in Brazil, Poitras in Germany.

It’s surely the case that no one in Congress has done as much as Wyden (D-Ore.)  to protect the Internet from enemies as varied as copyright lobbyists and overzealous intelligence agencies. But most importantly, he fought these things before it was cool to do so: he did everything in his power to fight an early ancestor to the Stop Online Piracy Act, and ominously hinted about some NSA programs—he was in the know, as a member of the Senate Intelligence Committee, but legally prohibited from speaking of them—years before Snowden came forth.

But this list is about what people did for Internet freedom this year. Rest assured, Wyden’s got that covered, too. In March, before either knew Snowden’s name, Wyden, in performing his regularly scheduled public harassment of the Director of National Intelligence, James R. Clapper, Wyden asked a direct question: “Does the NSA collect any type of data at all on millions or hundreds of millions of Americans?” They both knew the answer was yes, of course, but Clapper sputtered out an awkward “no.”

Two months later, Snowden leaked a document that proved the NSA collects the telephone metadata of practically every American, putting the U.S. intelligence community on its heels with each newly released leak.

As outrage over the NSA built up in the U.S., so it was with bills in Congress to reign the agency in. Slight problem with that, though—most of the dozens of hastily authored bills never saw the light of day. But Justin Amash (R-Mich.), a renegade young congressman who prides himself on transparency—he explains every vote on his Facebook page—saw an opening, and sneaked in an amendment into a a defense appropriations bill, which would have cut all funding to the NSA’s program to collect Americans’ phone metadata.

And Amash had reason to be pissed. A strict constitutionalist—he thinks the NSA violates the Fourth Amendment, which guarantees privacy—he’s part of the class of House representatives who awkwardly didn’t get the memo about the metadata program. Just as Wyden did with Clapper, Amash’s public feud with the House Intelligence Committee cast serious doubt on the NSA’s biggest defenders in congress.

Amash’s bill didn’t pass. It came damn close, 217-205, and more than enough members of Congress who voted against it later said they regretted their vote to have made it go the other way. More importantly, activist support for Amash’s bill as instrumental in drawing the Hill’s attention. Since then, Rep. Jim Sensenbrenner (R-Wis.) has authored a clear heir to the bill, the USA Freedom Act, which would reign in the NSA in more than just metadata collection, though it’d do that too. Amash has since thrown his full support behind Sensenbrenner’s bill, which appears likely to pass the House.

There’s a modern absurdity when talking about the Trans-Pacific Partnership, a trade agreement still being negotiated between a dozen countries along the Pacific Rim. It’s “a global threat to the Internet,” activists say, but such an abstraction that it’s hard to convince anyone to care.

Technically, no one but national trade representatives are allowed to see a draft, though corporate lobbyists are given some access to negotiators. Internet freedom advocates have hollered since its inception that the TPP was likely to force all participating nations to accept the same backwards copyright practices, but it’s a tough sell when you can’t point to any recent documents that say so.

But that argument got new life in November and December, when someone, or multiple people, leaked the most recent intellectual property chapter of the TPP, complete with which countries were sticklers for what issues, to WikiLeaks. Then, a few weeks later, the organization passed on a working spreadsheet of every country’s stance on every issue. Though the extent of the TPP’s implications still aren’t clear, we have a much better picture on a few things: that the U.S. is pushing for much stronger online copyright terms, and that it’s awfully lonely in a lot of its positions. It’s impossible to know how much this can be attributed to activist opposition, but the TPP countries then pushed back their deadline to 2014.

There are far more public advocacy groups than just the Electronic Frontier Foundation, and the EFF has so many people working on so many projects, when I emailed five of them to ask who most deserved to be on this list, I received five different answers. But only the closest observers to the NSA fallout noticed that when the Office of the Director of National Intelligence so transparently shared several redacted classified court opinions on the NSA, it wasn’t doing so out of the kindness of the office’s heart, despite the tone of its announcement. The release of that information was the result of a dogged, two-year process of litigation by Rumold, who’d been sending out Freedom of Information Act requests and demanding results from oDNI in court.

There’s an awful lot to be said for presentation. And it might sound glib, but it’s impossible to imagine that Americans will converge en masse on Washington, D.C. without a good one. That’s precisely what Sina Khanifar, the web design genius behind the website Stop Watching Us, was able to provide, allying his site with advocate powerhouses like the EFF, Reddit, Occupy Wall Street, and Fight For the Future.

When those thousands of activists gathered in October, prompted by Khanifar’s site, they were able to provide 575,000 petitioner signatures, boxed up into a pile like Walter White’s mound of money, to symbolically show Congress just how unpopular the NSA’s programs had become. It was a group effort by a lot of people, but it was Khanifar’s website that helped bring them together.

You have a lot of options online if you want to encrypt information you transmit online. Trouble is, none of it’s foolproof. Sure, maybe you never had complete faith that your Microsoft accounts were 100 percent safe, but some September Snowden revelations showed that fully avoiding the NSA online was even more difficult than previously thought.

Enter Levison, the founder of encrypted email service Lavabit, who won’t let that stop him from trying. How’s this for an endorsement of Lavabit: when Snowden emailed human rights groups on the run, he used the email address [email protected] But by that point, the CIA was hot on Snowden’s tail, and the agency quickly subpoenad Levison for Snowden’s email history. A good American who recognized Snowden was indeed a fugitive, Levison initially agreed to help. But a court ruled that he’d have to not just give up Snowden’s communications, but the encryption keys to his entire system—compromising everyone who used Lavabit. Caught in an impossible situation, Levison chose the only honorable option he saw left: to shut down his company entirely.

Since then, he’s been working, in conjunction with fellow encryptioneers from Silent Circle, on a creating email encryption all over again, now that they know how the NSA does it.

The majority of those at the front lines of the fight for Internet freedom—which, in the second half of 2013, usually means fighting the NSA—are doing: programming, leaking secret documents, testifying to Congress, running for their lives. But though her work comes through her keyboard, Marcy Wheeler, a.k.a. Emptywheel,  is no “tweeter in the basement,” as House Intelligence Committee chair Mike Rogers (R-Mich.) once put it.

Simply put, no one matches Wheeler, a former corporate legal advisor, when it comes to piecing together the fragments we know of the NSA’s secret legal justifications, themselves governed by the secretive Foreign Intelligence Surveillance Court, whose rulings are usually classified, or at least heavily redacted.

If you need more convincing, consider this: to follow Wheeler on Twitter is to get running commentary on NSA programs from someone who understands them better than the Senators, and government officials as they testify before congress.