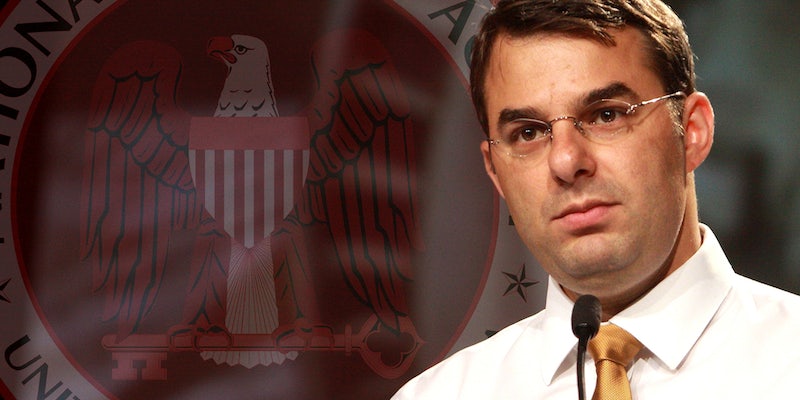 100 members of Congress were never told about NSA metadata spying

President Obama said in June that all of Congress had been briefed. Now Rep. Justin Amash (R.-Mich) has revealed that's not true.

It was supposed to be one of the government’s biggest pushes toward transparency about how the National Security Agency tracks Americans’ communications.

But according to Congressman Justin Amash (R-Mich.), the government’s official claim “all members of Congress” had access to the NSA‘s program to track the record of nearly every phone call in the U.S.—and, for a time, emails—is blatantly false.

“[T]he large class of Representatives elected in 2010 did not receive either of the now declassified documents detailing these programs,” Amash posted to Facebook Sunday evening.

This directly contradicts what White House’s official line. In a June 7 press conference, President Obama said of metadata collection that “every member of Congress has been briefed on this program.”

That program, often referred to the “Section 215” program, nodding to the chunk of the Patriot Act that made it legal, tracks the metadata, but not the content, of American conversations. That means every dialing and receiving phone number, how long those calls lasted, and when they took place, but not their actual words, and it started immediately after 9/11. For a time, that also applied to email conversations, but the NSA says it ceased that practice in 2011.

If anyone in Congress is riled up about Section 215 collection, it’s Amash. He was perhaps more vocally outraged as anyone in Congress, and authored an amendment bill to defund the full program that very nearly passed.

The Office of the Director of National Intelligence, hoping to quell Americans’ fears that the NSA was spying with little oversight—quite possibly realizing how much support Amash had gotten—released two similar, official letters on July 31st. Dated 2009 and 2011 and addressed to those years’ respective chairs of the House Intelligence Committee, they explain what we’ve known since Edward Snowden first came forth in June: that the NSA has an enormous database of communications that take place on American soil, and that whenever it acquires a new target, it can search that database to see their complete phone records.

Those letters were addressed to congressional intelligence committees. And though they’re clearly intended to be shared with all members of Congress, the rest of the House never got that memo, Amash said.

“I can now confirm that the House Permanent Select Committee on Intelligence did NOT, in fact, make the 2011 document available to Representatives in Congress,” Amash wrote.

Indeed, as his Deputy Chief of Staff Will Adams clarified to the Daily Dot, the entire Senate got that memo. But the House Intelligence Committee in 2010 didn’t forward the document on to the House at large, meaning that nearly a hundred members of Congress elected that year were oblivious to the fact that the NSA tracks their, and all Americans’, calls.

It gets worse. As noted by Empty Wheel, the same House that was largely unaware that the Patriot Act was used to track everyday Americans without a warrant voted in 2011 to extend that bill another four years.

White House press secretary Jay Carney seemed to anticipate the confusion in a June 9 conference. Speaking with Fox News’s Ed Henry, Carney initially said “the chair and ranking members of the intelligence committee have made clear that every member was advised of this and had the opportunity for briefings.” But he followed that by saying “I can’t speak to every individual member [of Congress].”

It’s not immediately clear why the House Intelligence Committee chose to keep the memo to themselves; a representative didn’t immediately respond the Daily Dot’s request for comment.

What is clear is that some of Congress was as surprised as anybody about Section 215, and that they’re not happy about it.

UPDATE: The House Intelligence Committee provided the following statement to the Daily Dot:

“The House Intelligence Committee makes it a top priority to inform Members about the intelligence issues on which Members must vote.  This process is always conducted consistent with the Committee’s legal obligation to carefully protect the sensitive intelligence sources and methods our intelligence agencies use to do their important work.  Prior to voting on the PATRIOT Act reauthorization and the FAA reauthorization, Chairman Rogers hosted classified briefings to which all Members were invited to have their questions about these authorities answered.  Additionally, over the past two months, Chairman Rogers has hosted four classified briefings, with officials from the NSA and other agencies, on the Section 215 and Section 702 programs and has invited all Republican Members to attend and receive additional classified briefings on the use of these tools from Committee staff.  The Committee has provided many opportunities for Members to have their questions answered by both the HPSCI and the NSA. And Chairman Rogers has encouraged members to attend those classified briefings to better understand how the authorities are used to protect the country.

An aide to Rep. Amash told the Daily Dot that Rep. Amash has attended “every briefing on NSA surveillance to which he has been invited,” including briefings on Section 215 programs.