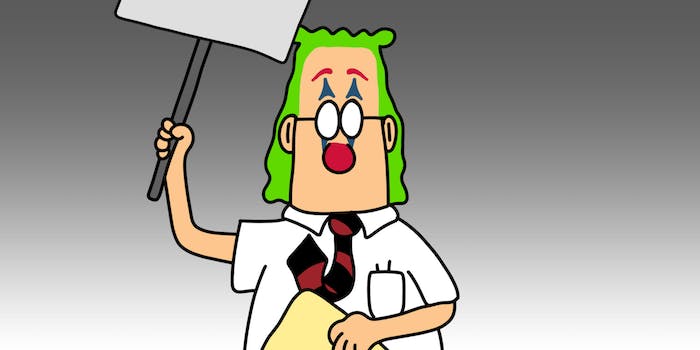 Dilbert creator says people are only protesting because they saw ‘Joker’

Over the past two weeks, people have assembled across the country amid civil unrest unlike anything America has seen since the late 1960s.

The causes are myriad. The protests stem from the brutal police killing of George Floyd in Minneapolis, but in a nation gripped by disease and unemployment, people are furious at a government that has been unable to both protect and help them.

Or, one well-known comic strip creator posits, it’s because they saw Joker.

Could all of these people on the streets in New York City; Washington, D.C.; Houston; and Los Angeles be there because Todd Phillips and Joaquin Phoenix JOKERFIED them?

Allow Scott Adams, the man who brought Dilbert into the world but is now a right-wing tweetfluencer, to explain.

“In the old days,” he wrote in a Twitter thread, “movies were mostly entertainment with a bit of social mind control sprinkled in. But our skills at movie-making kept improving along with our mind control skills. In 2020, a movie like Joker can rewire an entire nation into seeing things in its frame.”

Adams is saying that Joker was so poignant and so influential that until it was released, not one person was capable of seeing the conditions of the society they lived in.

No, really. That’s his entire argument.

“I’m willing to bet 90% of the protestors have seen Joker,” Adams said. “It is so powerful and well-made that it bounces around in your brain and burrows in, forming a dominant go-to pattern for your thinking … Can one movie nudge a young person into violence and anarchy? A bad movie can’t. Even a good movie can’t do that. But Joker can. That movie is next level, persuasion-wise.”

It is possible that a great number of people protesting saw Joker. It was the highest-grossing R-rated movie of all time, and though it was widely panned, it was beloved by a subset of people.

That subset of people were white nationalists who adopted Joaquin Phoenix as a mascot and rallied around clowns because Joker is about an aggrieved white man who felt society repressed him.

Those people exist, but they don’t make up the majority of people out rallying.

Case in point being Adams, who loved Joker and is adamantly online denigrating the protest movement and Black Lives Matter in general. Weird, right?