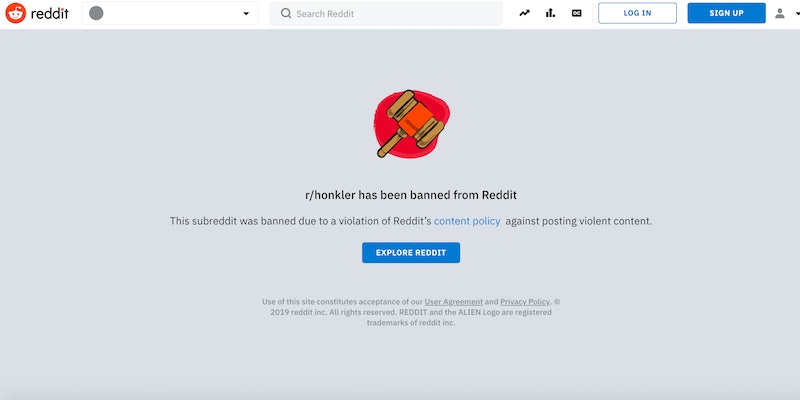 Honkler, a subreddit dedicated to alt-right propaganda has been banned from Reddit.

The ban comes weeks after a ban on a similar subreddit, Frenworld and mere days after the quarantining of r/The_Donald.

The official reasoning Reddit gives for quarantining The_Donald is "threats of violence against police and public officials."

First, The_Donald is likely one of the most Pro-LEO communities on the internet. It's pretty clear that Reddit is just slandering us with that alone. 1/7

The premise of Honkler and the content posted to it was deeply ingrained in what is referred to as “Clown World.” In memes posted to the Honkler subreddit, a variation of Pepe the Frog known as Apu Apustaja is often seen wearing a clown wig.

Honkler is tied with an internet mentality known as the “black pill.” This term is a variation of “red pill,” which is used by men’s rights supporters to denote their awakening to the dangers of feminism. Essentially, people who have decided to take the proverbial “black pill” see no point in continuing to live and decide to focus their energy on posting racist memes–from their perspective, there’s nothing better to do.

Subreddits such as Frenworld and Honkler became known for using coded language to mask the true nature. For example, “Honk, honk” served as a stand-in for “Heil, Hitler.”

Both subreddits engaged in activity such as referring to Jewish people as “nose-frens” and constantly bringing up the “Despite Being Thirteen Percent” phrase to imply that America’s black population disproportionately commits most of the nation’s crimes. Frenworld was also known for using the term “bop” when referencing violence to evade moderation.

That sub was creepy as hell pic.twitter.com/HWBz34LMir